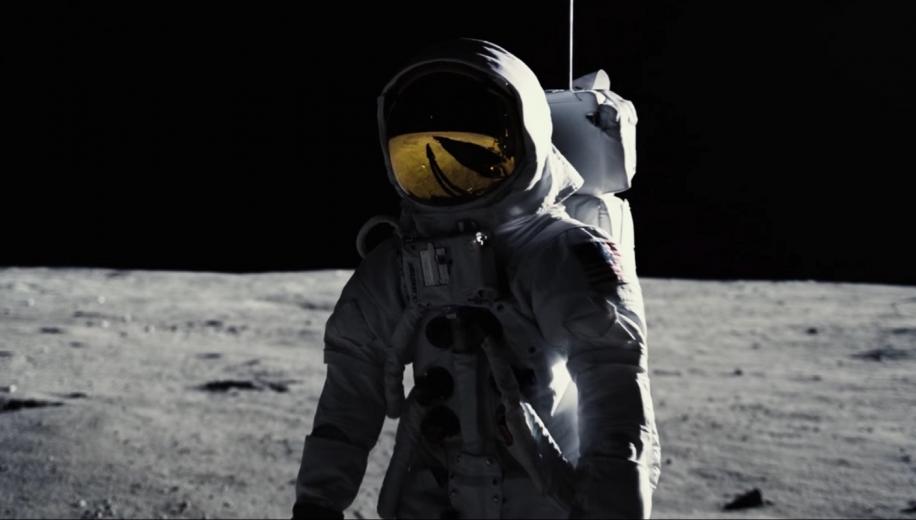 First Man tells the story of Neil Armstrong, the astronaut given the privilege of commanding the first landing on the Moon, and being the very first person to step foot on an extra-terrestrial body. In what is an extraordinary achievement, NASA, in just ten years, pioneered a way to leave our planet and land on an astral body moving at over 2200mph. Just think of the courage it must have taken those three astronauts to sit on millions of gallons of fuel and be fired out into space with no absolute certainty that they might make it back. And whilst there were many thousands of people involved within the mission, each with their part to play in this astonishing act, it ultimately fell to those intrepid three, commanded by Armstrong, to get there and back.

Armstrong, by all accounts, was a very humble man, very often pointing to the NASA employees who made the trip possible. He became a reluctant hero, of sorts, given the accolades but never saw himself as such. Director Damien Chazelle and screenwriter Josh Singer wanted to tell this story; the man behind the hero – his hopes, fears and dreams. The result is an intimate character study of a man who had fame thrust upon him, but was never phased by it, but rather saw himself as a figurehead, held there by those who were the real heroes, the workers, engineers, technicians and mathematicians that enabled the entire enterprise to take place.

Actor Ryan Gosling plays the part of Armstrong, and we follow his journey from test pilot, through the loss of his infant daughter to cancer, applying for and being accepted into the Gemini programme and ultimately commanding the first Lunar module and stepping onto the Moon. It is a big ask to condense seven years into two hours, and, indeed, there is plenty of artistic licence to do so; much of the background to the space race is passed over in one line, the set-backs, funding issues and congress are given lip service, in favour of telling the story of the man. And in this regard, it is a wonderful study: a warts and all look at his family strife, impersonal skills, his suffering at the loss of his daughter and how it affected his life thereafter and his almost ass-like behaviour towards his wife and family on the eve of the mission.

Everyone knows the story of getting men to the Moon, but by taking a very personal look at the commander, and therefore what the toll was, we see the task as something different: a very human endeavour. First Man was shot using a variety of cameras on 16, 35 and 65mm film, scanned and finished as a 2K DI which has been utilised for the creation of this Ultra HD Blu-ray. The disc presents an up-scaled 3840 x 2160p resolution image in widescreen 2.39:1 and 1.78:1 aspect ratios, and uses 10-bit video depth, a Wide Colour Gamut (WCG), High Dynamic Range, and is encoded using the HEVC (H.265) codec for HDR10 and Dolby Vision. We reviewed the Region free UK Ultra HD Blu-ray release of First Man on a Panasonic 65DX902B Ultra HD 4K TV with a Panasonic DMP-UB400 Ultra HD Blu-ray player.

This film is grainy

First thing to note – this film is grainy; particularly the 16mm stock, this is a cinemographic choice and has been retained in this UHD presentation. Indeed all the 16mm stock looks like old film; it is soft, at times overblown, grainy with pushed colouring – but that is the point. In fact, it looks just like film, more so than the Blu-ray, with a well resolved grain structure and strong stability (if you ignore the handheld shaky-cam). The 35 and 65mm stock is another matter resolving terrific detail both in close up and distance. So that when you bounce between the two stocks, on the Moon while Armstrong is recounting his daughter, the effect is almost jarring. Again, that’s the point.

Colouring is rich and bold with no wash or bleed and, depending on the stock colours, can be vibrant to the point of oversaturation or perfectly natural. Skin tones maintain a healthy glow throughout. HDR and the WGC push the colour palate but allow it to breathe, such that everything appears natural; check out the sunsets, or when the rockets take off, or better yet the Earth’s surface.

Black level is sublime. It is absolutely pitch in space, check out any of the scenes both inside and outside the module. Shadow detail gives hidden depth, while the white end pushed the highlights out. Check out the space suits or the lights reflecting off the helmets, as well as instrumentation panels. Ignition of the rockets is blinding while the exhaust fumes have texture.

Digitally there are no compression issues and the original source is pristine – I love the hairs trapped in the film gate too! – meaning this image is near perfect. The Dolby Atmos track is tremendous; right from the off when you are inside the cockpit of the X15 – the rocket howling behind you, the rattling of the craft all around, the breathing of Armstrong in front. Indeed any of the rocket sequences during take-off are incredible, and tangible sense of being there. Effects are remarkable, being both natural and augmented for dramatic purposes, it really works. And one thing about this track is the silence. There are moments of absolute nothing – black screen no sound, you are, in effect, in space, and the effect is remarkable.

Dialogue is clean and clear and very natural sounding mostly pinned to the front, but given occasional directionality when required. The score makes full use of the speakers as well. Bass is very natural adding much to the firing rocket engines but never overpowering while also filling out the low end of effects. A terrific surround track that is ‘out of this world’. In an unusual move all the extras are contained on the UHD, making the included Blu-ray completely superfluous.

Audio Commentary – with director Damien Chazelle, screenwriter Josh Singer and editor Tim Cross who give a full and all-encompassing chat track that covers not only all the aspects of production using both technical and anecdotal information, but also the historic importance and recreation of truth behind the script.
Deleted Scenes – Just the two entitled: House Fire and Apollo 8 Launch.
Shooting for the Moon – Four minute short with Chazelle explaining his role as director, his passion for the story, Gosling in the role portraying Armstrong as realistically as possible.
Preparing to Launch – Four minute short with cast and crew on Armstrong and his reluctant hero persona.
Giant Leap in One Small Step – Another four and a half minutes examining Armstrong, the family man whose humbleness defined his character.
Mission Gone Wrong – Three minutes looking at some of the stunt work.
Putting You in the Seat – Seven minute feature focusing of the cinematography, style and set designs used in the film.
Recreating the Moon Landing – Six minute feature that looks at this iconic sequence both as a filmic recreation as well as the real events.
Shooting at NASA – Three minutes examining the use of real NASA locations and their archival material.
Astronaut Training – Four minutes of the actors training using real NASA technology and locations. First Man tells the story of the first Moon landing through the eyes of the commander, Neil Armstrong. By taking a very personable look at the person piloting the craft, his family strife, impersonal skills, his suffering at the loss of his daughter and how it affected his life thereafter and therefore what the toll was, we see the task as something different: a very human endeavour. Director Damien Chazelle and screenwriter Josh Singer tell the story of the man behind the hero in what becomes a very intimate character study while encompassing the much grander story of the landing itself.

As a 4K UHD, the package from Universal is pretty good; the up-scaled picture is just about as filmic as it can get – detail is good, colouring is excellent, blacks are amazing and it retains the artistic intent of grainy film, when needed, side by side with pristine glorious 4K imagery. It is a real treat. The Dolby Atmos track is an absolute winner; from being inside a rocket as it takes off to the silence of space, this is a track that is stunningly natural. The extras are somewhat light considering the subject matter, but what there is covers good aspects of the film.