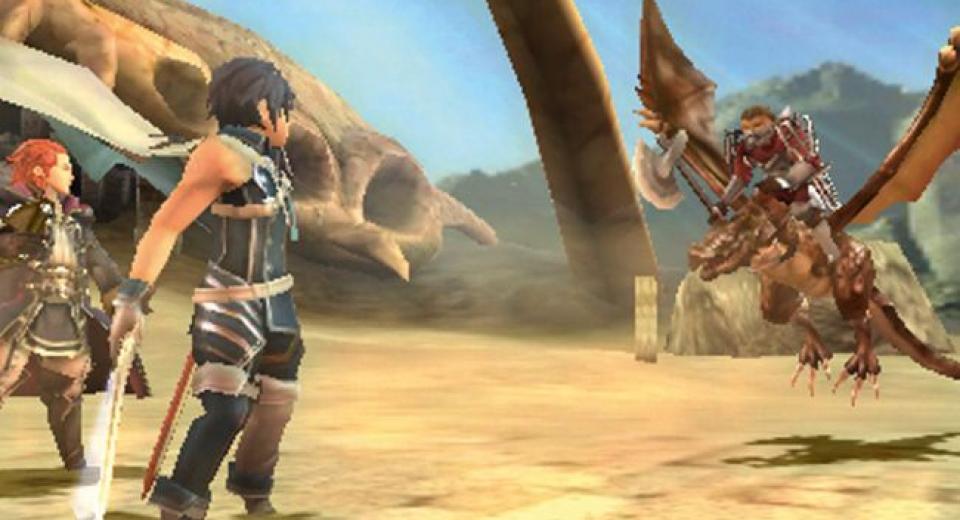 Whilst Nintendo have a struggle on their hands when it comes to the Wii U and trying to coax the bigger crowds to its machine, there’s no doubt in anyone’s mind that they have the handheld market well and truly dominated. Between the many iterations of the DS and the two iterations of the 3DS, Microsoft and Sony have not been able to come anywhere near Ninty in terms of sales and mass market appeal. Whilst that may be the case, you could count on your hands (maybe even just the one depending on your outlook) the number of core or adult-oriented games released on either of the handhelds.

But when it comes to system sellers and appealing to the faithful crowd who have followed franchises such as Mario, Luigi, Pokemon, Donkey Kong and Yoshi there has been plenty of reason to buy one or more machines. For those who needed one final push before falling completely head over heels in love with Nintendo’s product, there is finally one game that you must simply play before you die. Or acquire chronic arthritis in your hands, whichever comes first.

If I walked up to the average gamer and said, “Are you excited for Fire Emblem coming out?” I would probably get some response along the lines of, “Am I looking forward to the what coming out on the where now?” Being honest, I wouldn’t blame you because I didn’t have any idea about this game whatsoever until I saw the advert for it on the TV countless times and finally decided to give it a go. So for those who are new to the series like me, Fire Emblem is a franchise that has been published by Nintendo and developed by Intelligent Systems since 1990. Offering up a unique blend on the action and Role-Playing with turn-based strategy, tied with an intricately woven storyline, those who played the games were captivated but it failed to reach the heights it probably deserved. The last title, Fire Emblem: Radiant Dawn sold 0.46 million copies worldwide despite being on the receiving end of many positive critic reviews. But it’s the here and now and, where the last game released on the Wii, Fire Emblem: Awakening shuns the home console in favour of the 3D handhelds. So with a new home, will this latest addition in the series reach out to a new breed of gamers and ones who will spread the word about this under-appreciated brand?

Well let’s start at the beginning shall we? Awakening begins with the usual flair that you would expect from an Eastern RPG these days with over the top costumes, battles, names, locations and cliché at every twist and turn. It might not be the best written game around, but that’s not important, because every little thing within it can be scrutinised and will dictate how the game unfolds.

Before you can become comfortable with who is who and what is what the action kicks off with you creating your own avatar and sticking them head-first into the world of Fire Emblem. As it goes, you find yourself laid out with amnesia in a field discovered by Chrom the prince of the Halidom of Ylisse who is trying to keep the peace within his nation. However, his neighbours are acting suspiciously and an unknown band called the Risen cause havoc wherever you go. After being accepted into the prince’s brigand known as the Shepherds, you find yourself travelling across the fictional world in order to try and restore peace and keep his family safe. So whilst the story may not be the most enthralling in the world, or one that keeps you feeling like you have to see the next chapter through before ending your session, it’s the characters that really make it. Just like a movie has a bit of a wobbly plot yet the actors within it make the plot fade into insignificance, this is what happens here. Each individual has their own unique set of abilities, skill sets, traits, stats and a heap of other things which have the potential to influence the rest of the story from chapter one. As such, you spend probably half of the game scrutinising what your units are equipped with, who they should work with, who to send into battle and when to leave it for a later date.

The simulator factor is enforced when you soon come to realise that certain characters work well together, others can build their relationship for the better and others like nothing more than giving one another a good ribbing and remaining separate. Nice little scenes can be watched which show dialogue between friends and allies and their outcomes which can be marriage and children should you leave a male and female character together for long enough. Honestly, I don’t think I’ve come across a game that makes you care as much as you will here; a life is not something to be taken lightly and Intelligent Systems will drive that home if your tactics aren’t spot on.

Like any other RPG out there you can chose what level to play this game at given your ability, familiarity with the series and bravery (or stupidity it can transpire). It’s suggested that newcomers go for the easy setting whilst those who feel especially brave and lucky can go for medium or hard. For those who are even more hardcore you can raise the challenge bar even higher with classic mode which means any comrade you lose on the battlefield will remain dead for the entire game. If any of your main characters meet an untimely death, you will have to restart from the last save point which could be quite a way back as classic mode has limited chances for saving.

Awakening isn’t like anything out there I have played on another console before. There are similarities of course with sections reminding you of Advance Wars and the older Final Fantasy games whilst the art style reminds you of Pokemon crossed with your typical Eastern RPG. The title plays out on both screens and makes perfect use of each with neither feeling like it’s there for the sake of it. In the world map, the touch screen shows you a zoomed out overview of the towns and cities you can visit whilst the top screen shows you them in more detail highlighting friendly and foe units you can avoid or take on. The battle sections are where the device really shines however as there’s an exquisite balance of detailed combat and top-down strategy all at the same time.

Poking away with the stylus you dish out the commands to your units which can lone wolf in their attack, talk with strangers to recruit them, team up with existing allies or seek shelter in the nearby environments. Whilst not hugely detailed, these sections can be intense as one wrong move can see multiple units being wiped out in one go. Foes will be all over your airspace if you send a weak friendly out on their own. The actual battle sequences are where the game shines as it shows off the detail and prowess of the game thanks to the console's power. The 2D style disappears and units battle it out in all their glory with the camera open to change as you can control the angle from which you view.

Strategy goes beyond simply having good formations or equipment, each class has their own strengths and weaknesses and certain characters can attack twice in one move. Swords beat axes, axes beat lances and lances beat swords whilst archers have the upper hand over airbourne enemies. Archers and mages can attack from a greater distance but can’t counter attack if they are hit from close range and healing spells can only be used if you are adjacent to the desired recipient. When you consider that certain characters like fighting together and complement each other’s fight styles, there are a vast amount of possibilities with which you can succeed. Beyond the fighting there are nice little sections where your friendlies interact with one another, discuss tactics, talk about hope and dreams or simply ask how one another is doing. It’s not a massive feature or one that defines the game, but one that pushes you into caring about your units and franticly remembering who wished to fight with whom.

Then there is the score. There’s a beautifully conducted track throughout the entire game no matter what the situation or sequence. It’s memorable, fitting and can be emotional if you have lost a character close to the plot and have perma-deaths on. In one instance, there’s a sequence where a battle leaves you distinctly ‘what the hell’ and a sombre score plays throughout an entire battle not allowing you to forget what just happened. From a handheld title, this is nothing short of spectacular and its unlikely you’ll ever be as captivated as you will be here.

It’s not easy placing a completion time on Fire Emblem as you can spend a huge amount of time grinding up levels, buying new equipment, completing side quests or even soft resetting your console in order to erase a death which you could have easily avoided in hindsight. Rest assured this won’t be over and done within a week unless you play it non stop every day and night.

It must also be said that the 3D is fantastic for this and isn’t gimmicky. It’s genuinely a sight to behold from the battle sequences where the scenery has clarity and depth to the dialogue scenes where the snow falls and flutters gently in and out of the screen. On the flip side, there is the creepy feature whereby none of the people in the game have feet. Stop laughing at the back there, I’m being serious as the bottom of the shin is as good as it gets. Whether this was a pixel saving exercise who knows but it’s a little off putting seeing somebody run without any feet.

Fire Emblem is an absolute triumph throughout and for a handheld game to stand out as much as this game inevitably will is no easy achievement. Awakening is another system seller for Nintendo and anyone who is in doubt over purchasing one should jump at the chance even if it is to play this game alone. It's full of strategy, tactics and characters who you will end up caring for and tending to like an over-protective parent which is no bad thing, it's just one more testament to the excellent job Intelligent Studios have done. The story is a bit dry and can be a little complex but it's the characters within it that really make this title what it is and for the money you'd be hard pushed to find a game like this on home consoles let alone a portable console.