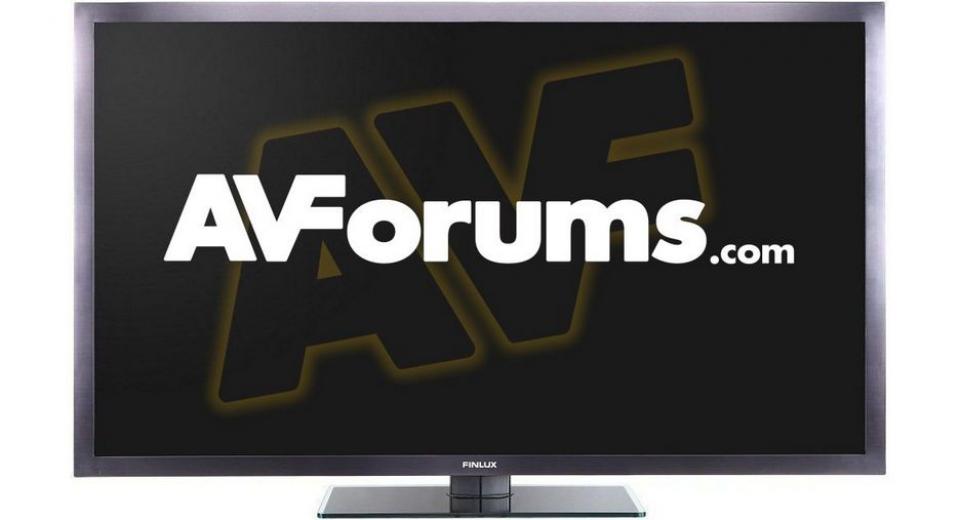 You certainly can’t criticise Finlux for a lack of ambition. Here, in the S8090-T is a formidably large TV at a price that is anything but daunting. At less than £800 for a 55-inch Smart TV, the S8090 is certainly at the budget end of the market but, as Finlux has sometimes proved in the past, budget doesn’t have to mean a bad picture and if they can pull it off, the 55S8090-T is a potential steal. Despite its entry-level standing, the S8090-T comes Wi-Fi capable, includes USB PVR recording and has access to Finlux’s online entertainment portal. Bargain or banger – let’s take a look.

Aside from the manufacturers logo, perhaps, there’s absolutely no indication that the S8090-T is a budget model from its outward appearance. The brushed gun-metal effect bezel is very appealing and a weighty glass table-top stand - which is a ‘swiveller’ - provides suitable ballast. Alright so the bezel isn't of the micro variety but at around 3.5cm, it’s not the fattest either and the chassis is also quite slender at under 5cm.

Finlux hasn’t skinnied on the connectivity front, either, will a full complement of 4 HDMI inputs – 3 out/1 side-facing – as well as 2 Scarts, 2 USB, VGA PC, Component and Composite video connections and a CI slot for premium digital content. On the audio front – well, back - there’s an S/PDIF digital audio out, a headphone jack and L/R stereo inputs for the component and composite video connections. Finlux has slightly redesigned the remote control, giving the front a more concave and ergonomic aspect but it’s still quite a bit larger than the average handset. We have no problems with it, however, it’s well mapped and the large buttons make it easy to operate. The new indicator light at the top will also banish any doubts about whether your batteries are dead, or not.
Audio

To term these 2 x 8W speakers as average would be pretty generous. Even by the generally poor performance standards we see from emaciated flat panels, the S8090-T ranks badly. It’s tinny, in extremis, and sounds strangled across the frequency range. Still, if it turns out the Finlux can knock out a good picture, the money you’ve saved buying it can be put toward some kind of audio solution; be it separate speakers or a soundbar.

Menus are well planned, easy to navigate and extremely responsive to the remote and the black and gold colour scheme is also quite attractive. The Menus are split in to 6 areas – Picture, Sound, Settings, Install and Retune, Channel List and Media Browser. As ever, we’ll concentrate on the main Picture functions particularly as Finlux has done such a good job of making the rest of the menu functions fairly self-explanatory and logically positioned. The Finlux 42S9100-T offers a choice of 4 Picture Modes – Dynamic, Natural, Cinema and Sports - of which Cinema usually provides the best out-of-box performance. There are, of course, all the usual ‘front-panel’ controls of Contrast, Brightness and Colour as well as options for Low, Medium, High and Auto for the Backlight intensity. There’s some ECO modes for either switching off the video signal or setting to a low energy mode. Moving in to the Advanced Picture Settings and we have options for Dynamic Contrast, Colour Temp (Cool/Normal/Warm), Movie Sense, Film Mode, Skin Tone, Colour Shift and RGB Gain. We’ll go in to further detail on almost all of these in subsequent sections but we were very impressed that Finlux provides a split-screen demo of what Movie Sense does – it’s an interpolating feature, for those that hadn’t guessed, intended to improve motion performance.

The Finlux 55S8090-T ships with a USB dongle that enables a wireless connection to your home network. Even in the next room, the Wi-Fi connection was quite weak so it’s probably best situated in the same room as your wireless access point. Compared to the established players’, the Finlux online Smart portfolio is a little bit limited but, to be fair, there’s a decent selection of the ‘old guard’ with BBC iPlayer and YouTube for Video on Demand (VoD) and Facebook and Twitter apps for social networking junkies. A Smart TV wouldn’t be quite so clever if it didn’t allow for a spot of media streaming and the 55S8090 makes an OK job of this task but it’s quite limited. We couldn’t get the S80900-T to scour down more than one folder in to our file structure on our Windows 7 PC, which is something we’ve encountered before and usually an indication the processor isn’t really up to the job. Unfortunately we couldn’t get MKV files to play either by streaming or via USB, which will be disappointing for some and general file support, especially for video, is lacking against some of the competition. The ability to record from the in-built tuner is present, when connected to a USB storage device, and the lay-out of the recordings options is very easy to follow. The fact that the tuner is Freeview HD capable is an obvious bonus.

Finlux actually has two default picture modes; if you’re watching from the inbuilt tuner then it defaults to ‘Natural’ but plug in an external source and it will hit you both barrels with the appalling ‘Dynamic’ pre-set. We’ve demonstrated how bad Dynamic is with previous Finlux reviews so let’s see what’s in store for Freeview watchers. It could be worse (it could be Dynamic) but there’s still more blue energy in the greyscale than we’d like and the Energy settings are affecting its relative brightness (gamma). The CIE chart to the right demonstrates how the excess of blue is dragging the Cyan and Magenta secondary colours off course but the gamut is in reasonable order otherwise, in terms of hue and saturation, although luminance is too high across the board. The observant regular readers will have spotted the omission of the intermediary ‘Basic Setup’ section and the reason for this is simple. We thought Finlux had fixed the bug with its RGB Gain controls when we reviewed the S9100 but it transpires it’s still present in the S8090-T. The controls directly interfere with colour luminance which makes them unusable. We could actually get a very commendable greyscale with even the coarse controls provided but that was at the expense of sending the luminance of red through the ceiling making images majorly overcooked. As it is, we switched in to the Cinema Mode, adjusted Contrast, Backlight and Brightness to optimal levels, changed Colour Temp to Warm and knocked the Colour slider down a few notches giving us a reasonable greyscale response with Delta E’smostly under 5. We’d usually aim for 3 and under but sometimes you just have to take whatever you can get. Overall colour reproduction suffers because of the lack of effective White Balance controls too; with them we’d have got the secondary colours lined-up better and the chart below, demonstrating results at multiple saturation points show magenta is particularly effected. The results of the Green primary are the most damning. It’s badly over-saturated at 25, 50 and 75% giving grass and foliage an unnatural aspect and lack of colour definition. Bearing in mind the bug with the RGB gain controls we were a little worried that the improvement in the handling of 1080p24 Blu-ray content would also not have been implemented in the S8090-T but those fears proved unfounded and it was impressively smooth with that content. Scaling of standard definition signals was quite good with just a feint hint of ringing but, really, if you’re planning on a 55-inch TV, we’d advise feasting largely on a diet of high definition. Video deinterlacing was adequate rather than startling with some jaggies visible in finer detail under movement and the S8090-T was unable to pick up on the PAL 2:2 cadence meaning you’ll be best playing those old DVDs through an upscaling player.

From a quick perusal of the Finlux website we were presuming the S8090-T was going to be equipped with an IPS panel. For a manufacturer to quote a conservative 1600:1 contrast ratio is unusual enough but for the actual measured results to be higher than theirs, possibly a first. Using an ANSI checkerboard pattern to calculate contrast with mixed content, the S8090-T managed a very respectable 2030:1 figure with an On/Off number of nearly 3300:1. Averaged black levels from the checkerboard stood at 0.046cd/m2 with full screen black slightly lower at 0.038 cd/m2. Pretty good.

Input lag measured at around the 50 milliseconds putting the Finlux S8090-T in the low middle order in terms of responsiveness to controls. The Game mode measured a couple of milliseconds lower than the other modes but it takes some serious adjustment to stop it looking horribly garish so your eyes would probably enjoy it more in the Cinema Mode.

You know what, despite the limitations of the broken picture controls and errant performance of green, the Finlux S8090-T generally produces good pictures. Black levels, and therefore contrast performance, are convincing giving a nice punch to content and colour reproduction is accurate enough to convey believability although the green cast of the greyscale is sometimes quite noticeabke on skin tones, giving them an olive tinge. We’ve seen dozens of LED/LCD TVs with decent blacks only to be undermined by uneven backlighting and the S8090-T supplied for review did sometimes exhibit this trait in the dark scenes but we've certainly seen worse. We could, on occasion, notice the panel structure on panning shots with lighter colours but by and large it didn’t really put the mockers on things.

The VA panel variants, as equipped in the S8090, have quite a sharp look to them and, in fact, the Finlux looked heavily over-processed appearance at default settings. We’d advise anyone in possession of the 8090 to immediately turn down the Sharpness control to zero, as even at low settings it’s very aggressive. Equally uncompromising is the motion interpolating ‘Film Sense’ control which produced quite a lot of ghosting and picture artefacts even when used in its mildest configuration. Superficially it does help motion resolution but we settled to put up with a spot of blur rather than suffer its inadequacies. The Finlux S8090-T isn’t going to satisfy the hungrier videophiles out there but you wouldn’t think this 55-inch TV has a stock price of under £800 by looking at it.

It might be relatively low cost but the Finlux S8090-T certainly doesn't look low rent with a design similar to that of last year's Samsung flagship plasma. Connectivity options are impressive too and include 4 HDMI ports. The remote control has seen a small redesign but it's still huge and easy to use. Interfaces are quick to load and menus simple to understand but the malfunctioning calibration options meant we weren't able to extract the most from the S9090-T.

Despite not attaining the levels of picture accuracy we're accustomed to, this entry-level 55-incher still managed to impress. Finlux has improved on its handling of Blu-ray disc and with a decent contrast punch to back up the new fluidity we were, at times, looking at a big screen bargain. The S8090-T is not without its issues; screen uniformity could be improved, motion handling isn't all that and we couldn't shake a slightly olive cast to some skin tones but price has to be considered.

The Finlux S8090-T is definitely worth its asking price. It's not going to satisfy the more demanding viewers out there but it certainly more than justifies its position in the sector of the market it occupies.