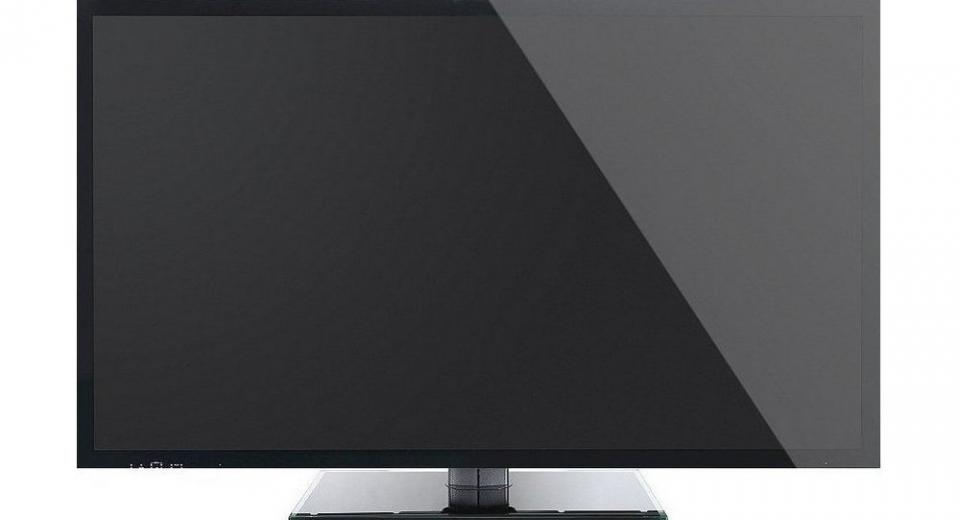 The Finlux F8090-T is available for around the £550 mark - for which you get 50-inches of screen real estate, a range of smart features including media streaming and internet apps plus a good set of connections around the back. So, prospectively, this might prove a bit of a steal if the picture quality can stand up to scrutiny. In all honesty, the Finlux’s we’ve reviewed to date have proved a bit of a mixed bag so let’s see how the cookie crumbles this time around. This Finlux is quite a stylish display. We like the dark, gun-metal frame which makes a nice change from silver or black and the panel feels fairly robustly constructed, too. Finlux have historically been generous with their connectivity options and the F8090-T is no different, sporting 4 HDMI ports, a couple of Scarts as well as composite and component video. An optical audio out will connect it to a receiver/amp or soundbar should you wish to boost the sound. And you will because these are some of the worst speakers we’ve heard in a flat panel television, which is saying something.


Some of the worst speakers we’ve heard in a flat panel television, which is saying something.

We do, however, really like the included remote which has a nice tactile, brushed feel to buttons and sits in the hand in a non-fatiguing way. Buttons are positioned well, with good spacing in between, so even if you have chubby fingers, there should be no issues. Finlux presents its menu system in gold and black which is, again, a break from the norm and they are nice and responsive. Some of the sub-menus feel a bit cluttered but item placement is logical enough, generally speaking, so usability is good.

The default Picture Modes include Dynamic, Natural and Cinema, with the latter giving the closest approximation of industry-wide picture standards. Quite how close we’ll discover further down the page but, at default, things do look a touch green-tinged. The Picture Menu contains some advanced options, including Dynamic Contrast, Film Mode and some basic white balance controls which, again, we’ll look at later. The F8090-T is one of Finlux’s breed of internet TVs, providing access to their online portal. Compared to the big boys, offerings here are fairly slim but there’s a sensible concentration on the most important (and widely used) smart tv services. Vis a vis, you are given BBC iPlayer, YouTube, Skype, Twitter and Facebook apps at your disposal. The upcoming models are also to play home to Netflix but presumably the 8090-T doesn’t have the processing prowess to run the user interface and profiles. There’s also a limited media player at your disposal which operates either via USB storage, plugged in, or over your network through DLNA. File support is pretty basic, however, and anyone with a large collection of mkvs or DivX files will need another solution. So, as a basic Smart TV, the F8090-T is perfectly serviceable but if that sort of thing is high priority, you’ll need to look more mainstream. It was totally unsurprising to see that the 8090 was over-emphasising the green channel, which is unfortunate for an ‘accurate’ mode, being the most visible error to the eye. It’s a trait we’ve become accustomed to in Finlux TVs and one that usually has a fairly easy fix. The gamma curve is far less desirable, however, and given the controls on-board, probably not something we’d be able to do much about. Colour performance is a tad better although, again, the under-saturation or red is almost certainly beyond the reach of the limited panel controls and, in any case, a natural trait of the panel, by the looks of things. Finlux’s RGB controls are coarse, in the extreme, but at least they’re not broken any longer. Simply by reducing the slider on the Green channel by one notch gave us the results shown below, which isn’t too bad in the mid-scale, in terms of balancing red, green and blue but the relative luminance of the greyscale (gamma) was still sub-standard. In simple terms, dark portions of the picture are unduly washed out, a problem compounded by the poor screen uniformity. More on which below.
. Of course we were unable to fix the saturation issues with the red primary with just a global Colour control to work with and dropping it to fix the universal over-luminance of the colours only shrunk the colour space further. Fortunately, getting the white balance in better order paid dividends with the secondary colours and, overall, it’s a reasonable result. As we can see from the chart below, which shows measurements of colours at less than full saturation, the 8090-T was actually quite impressive with its colour tracking prior to reaching 100% levels.

This isn’t going to make for great reading for any Finlux employees looking in but this TV is possibly the worst we’ve looked at in terms of screen uniformity. Any opportunities to deliver convincing dark scenes fell flat on its face, in pools of unforgiving white light, that polluted large portions of the screen. Truly shocking and had it been a product we’d bought at retail, returned in a thrice. And what a pity because native black levels are really rather impressive for a LED/LCD TV, with an ANSI contrast of nearly 4,700:1 but it’s all completely ruined by poor QC.

Scaling of standard definition signals wasn’t too bad but on a 50-inch TV, you really want to be viewing as much HD as possible. Video deinteralcing at 1080i50 wasn’t great with the break up of lines easily visible when watching sports with pitch markings and the F8090-T could not lock on to the PAL 2:2 cadence, meaning you’ll be best playing your DVDs through via a Blu-ray player. In terms of Blu-ray discs, themselves, 1080p24 encoded material shows the odd bit of skippi9ng so it’s not rock solid but adequate for the most part.

With games that are largely bright and colourful – which is quite a number – the F8090 is a reasonable budget, big-screen gaming panel. With an input lag that measures consistently between 33 and 35 milliseconds, you’re never very far behind the action so it is worth considering for this pursuit but you’re going to find it difficult to pick out enemies lurking in the shadows, given the poor uniformity and general lack of detail in the dark portions.

Energy Consumption
The following measurements were taken with a full screen 50% white pattern:

What a different story this could have been had Finlux’s Quality Control been on the case but as it is we’re left to bemoan the shortcomings of yet another edge-lit LED TV. Instead of talking about the incredibly impressive native black levels, we’re compelled to report the insanely bad light pooling which covered as much as 70% of the screen area. Furthermore, shadow detailing was near to non-existent which was not only as a result of the poor uniformity but just as much the poor gradation and washed out performance near black. If you haven’t got the message by now, this is not a TV you would want to watch anything containing a lot of dark scenes and, if you do so, certainly not with the lights down low which accentuates the problems. The colours, whilst nowhere near reference, are actually fairly impressive and there were times when we found ourselves forgetting the issues but, ultimately, this was an unacceptable television.
It all could have been so much better!

Considering the modest entry-price, the Finlux F8090 is certainly a reasonably attractive TV. Plain and simple, we grant you, but the dark gun metal bezel is a break from the norm. User interfaces are quick and responsive and mostly well planned and the recently made-over online portal is pleasing to the eye. It’s not exactly brimming with content but there’s iPlayer, YouTube, Facebook, Skype and Twitter amongst the big hitting apps.

The lack of focussed calibration controls meant we had to perform ‘make-do and mend’ adjustments to get the 8090 in to the realms of producing an accurate image. The charts aren’t particularly impressive although, on-screen, things certainly didn’t look too bad but reds were noticeably muted. In fact the picture would have been just great, for a TV of this price, had a bucket load of light pooling issues not spilled across the screen and spoilt virtually everything. We can make some allowances at this level, when all things are considered, but in this instance, the crimes are too grievous to be granted forgiveness.