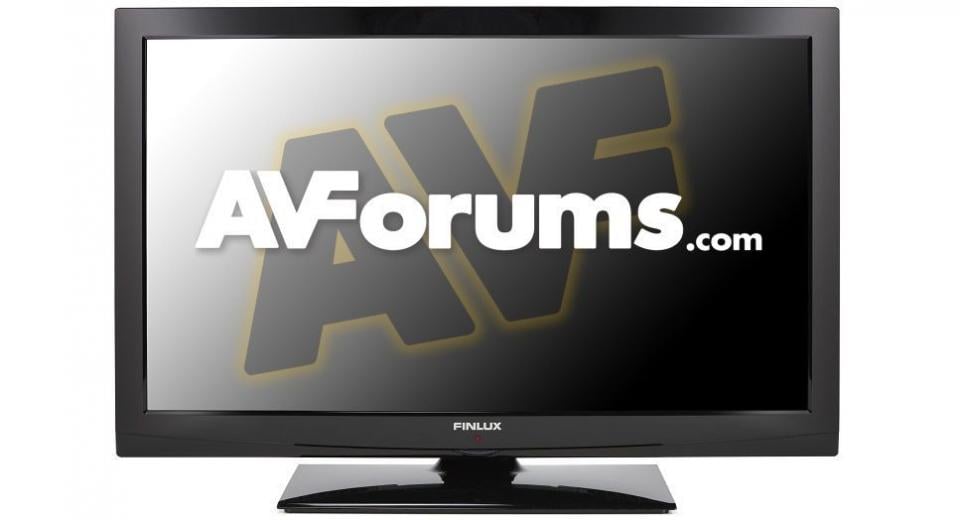 Finlux’s approach of taking their products direct to the customer through their own online store seems to be paying off, with new models regularly appearing thereon. The company has also been bolstering its smart TV capabilities with a launch of an iPad/iPhone remote control app and generally sprucing up their offer. The latest model they’ve sent to us – the 32F7020-T features a 3D HD Ready Panel and can currently be had for the unfeasibly low price of just under £230. We’ll say from the outset that the inclusion of 3D on a 32-inch TV is a brave choice as it isn’t really going to provide anything like an immersive 3D experience, unless you sit very close. Still, at the current asking price, it can still be judged as an entry-level 2D TV; not that we won’t check out the 3D presentation.

We think ‘basic’ would be a good description of the Finlux F7020-T but there’s nothing to be offended by in its black bezel approach and there’s even a little swoosh of designer chic by way of the curved power light that sits under the Manufacturers Logo that glows red when in standby. It all looks a bit 5 years ago but, to many, it will sit in their rooms just fine. Finlux’s new remote control is a little like the LG designs and we like it with its well conceived design and a good amount of space between buttons. It’s quite an attractive thing, actually, featuring a brushed design and a tactile, softened rear which sits nicely in the hand. Also in the box is were 8 pairs of 3D Glasses, should you ever need them.

Connectivity options are excellent for this market sector with four HDMI ports – 3 facing outwards from the rear and one close to the edge. There are also 2 RGB SCART terminals, a D-SUB PC connection, Component and Composite Video connections with accompanying L/R audio jacks, aerial socket and a LAN Port. There’s also a S/PDIF digital audio out and completing the connections, on the side, are two USB inputs and a CAM slot. The Finlux Menus are generally well planned, easy to navigate and extremely responsive to the remote; the black and gold colour scheme is also quite attractive. The Menus are split in to 6 areas – Picture, Sound, Settings, Install and Retune, Channel List and Media Browser. As ever, we’ll concentrate on the main Picture functions.

The Finlux 32F7020-T offers a choice of 5 Picture Modes – Dynamic, Natural, Movie, Game and Sports – which we’ll measure for accuracy later on in the Test Section area of this review. There are, of course, all the usual ‘front-panel’ controls of Contrast, Brightness and Colour as well as options for Low, Medium, High and Auto for the Backlight intensity. There’s some ECO modes for either switching off the video signal or setting to a low energy mode. Moving in to the Advanced Picture Settings and we have options for Dynamic Contrast, Colour Temp (Cool/Normal/Warm), Film Mode, Skin Tone, Colour Shift and RGB Gain. We’ll go in to further detail on almost all of these in subsequent sections. Being as the 7200 is a 3D model, there’s options for that in the Picture Menu with 3D Mode (Top/Bottom, Auto, Side by Side), Low Medium and High for the 2D to 3D Conversion, Left/Right swap to reverse the polarity for those experiencing uncomfortable viewing and 3D Depth Sense with a slider that runs from minus to plus 10.

There’s no really a lot to write home (or on the internet) about in terms of the F7020-T’s features set. All it really can boast is some limited playback of media files from USB storage. We found it unable to play any MKV files whatsoever and it also demonstrated some issues with mp4 files, where video would sometimes break up or not show at all. There is the ability to record from the internal tuners via USB and the interface looks nice, in keeping with the rest of the GUI.

As is generally the case with the Finlux TVs, both the Natural and Movie presets provide similar base accuracy, once their Colour Temperatures are changed to Warm in the Advanced Picture. In this case, the F7020-T was showing quite a noticeable excess of green in the greyscale, with Delta Errors approaching 10 near white. Gamma is tacking reasonably close to our 2.2 target and colour representation is actually quite good. In point of fact, this was where the Movie preset was demonstrably better than Natural, with a generally superior colour luminance performance. Luminance is the aspect of colour are eyes most easily detect problems with and the F7020-T acquits itself reasonably well in that regard. We’ve experienced a few hiccups, in the past, with Finlux’s rudimentary calibration controls. Contained in the Advanced Picture is what Finlux term the RGB Gain controls, which act as single point White Balance control. We’re more accustomed to 2 or even 10 pt adjustments so we’ll take what we can get and fortunately the F7020-T doesn’t repeat the ways of some of its forebears by not causing serious colour luminance errors by using the RGB Gain options. The controls are so coarse that it only took one click on the Green channel to gain delta Errors under 3, from black to white – which is pretty good. The only thing we could do with the colour was to knock down the global Colour control which saw most fall in to line, in terms of luminance, but green was decidedly yellow tinged and is a touch on the orange side, as we can also see with the graph beneath, which plots their performance at lower saturation. It’s OK, and for the price-point quite creditable, but having recently had a string of TVs that calibrated to reference performance, the errors were fairly easy to spot on familiar material. we saw improvements in the last few Finlux’s reviewed in terms of their handling of 1080p24 but unfortunately this 720p panel doesn’t’ handle Blu-ray brilliantly. Besides the scaling artefacts, there’s a definite judder which indicates the panel is internally converting to 60Hz. To be fair, neither issue is that visible on a screen this size and the target market probably wont care less. The F7200-T wasn’t able to detect the PAL 2:2 cadence but does detect the NTSC 2:3 cadence. Scaling performance from SD sources is actually quite good, with only just a hint of ringing to 576i pictures. Video deinterlacing is a little less impressive with some quite noticeable break up of fine lines and detail in motion.

With the Finlux F200-T sporting passive 3D technology there’s no doubt it’s using an LG IPS panel. Deep black levels and large dynamic range are not a trait of these panels and so it should come as no surprise to see the 7200-T well below the 1000:1 milestone for contrast ratio. Averaging a black level of 0.14cd/m2 against an averaged peak white of 109 cd/m2, on our ANSI checkerboard pattern; topping out at 810:1. We could have pushed the panel much brighter and seen a commensurate increase in contrast but we try and standardise a peak white of 120 cd/m2 on a full raster to keep the playing field level. We’ll give half a mark for the black levels owing to a very good level of screen uniformity and an effective filter that combats ambient light well. You can see from the checkerboard measurements that the screen is a fair bit brighter in the centre, but that was only noticeable in the really dark scenes. Thankfully, there was little to no clouding or light leakage from the corners.

The F7020-T proved quite a nifty little gamer. As we often find with fairly basic TVs, the lack of fancy schmancy processing overheads leads to lower input latency with this little Finlux clocking in at around 30 milliseconds in both 2D and 3D. The hyper-critical or those that sit very vose might spot a bit of smearing in high contrast moments but we’re prepared to forgive for the lack of latency.

For anyone with a diet whose TV dinner is largely a diet made up of broadcast TV, the Finlux F7020-T makes a pretty good choice, all things considered. The scaling down of standard definition signals is done very well and with a couple of minor adjustments in the Picture Menu, colours are believable enough, although skin-tones look a wee bit baked. The F7020T’s ability to go incredibly bright and its generous viewing angles would make it a very good choice for a conservatory or a room with lots of natural light. The excellent screen uniformity is also a major plus. As we’d expect from an older generation IPS panel, motion resolution isn’t the best and sports fans might just notice some ghosting and blur but, again, on a panel of these modest dimensions, you’d probably be hard pressed to notice at typical viewing ranges. The Finlux 32F7020-T is far from perfect but it is certainly watchable and we can’t forget the price-point at which we’re at.

We said at the outset that we couldn’t really understand the need for 3D in a panel measuring only 32-inches diagonally and nothing that we saw from the F7020-T really changed our minds about that. Blu-rays looked OK, in terms of brightness and colour but there was an unusual amount of crosstalk for a passive panel. The ghosting effects of crosstalk were also brought to bear, with bright objects on darker backgrounds and the handling of side by side material at 1080i also left something to be desired. Putting on our favourite testing of that format – the BBC’s Wimbledon Coverage – revealed a further increase of the amount of crosstalk and jagged edges to objects and faces. If 3D is of major importance to you, you’d probably be best served looking elsewhere and at something substantially larger. Mind you, with an asking price below £230, what could we really have expected?

The F7020-T is a pretty basic black box of a TV but there’s nothing wrong with that approach as not everyone wants or needs modern designer chic in their homes. We certainly are not complaining given the generous range of connections that include 4 HDMI inputs. The supplied remote is actually quite a chic handset with its brushed charcoal fascia and it navigates round the easy to understand and well-presented menu system in bright and breezy fashion. In terms of features, there’s not much to report here, although we guess it’s a sign of the times when a TV that includes USB media playback and PVR recording is regarded as lacking in smart features.

Finlux’s calibration controls have been cumbersome at best and useless at worst but at least what’s available in the F7020-T does function, to a degree. With the coarse controls we were able to eek out a very good greyscale performance and decent colour representation. Raw contrast performance has never been a strong point of the panels used in passive 3D TVs and so it proved here but at least the 7020-T can boast decent screen uniformity and wide viewing angles as strengths.

As a 32-inch TV, the Finlux F7020-T was never going to be a serious contender as a 3D model; it’s just too small to fit the bill and we could also see issues with some fairly obvious ghosting. That said, those looking for a 3D gaming monitor could do a lot worse as it’s very responsive here. It’s really as a straight 2D TV that we expect this little Finlux to be fighting it out in the marketplace and for broadcast TV and DVDs it’s perfectly adequate for purpose; and at less than £230, extremely competitively priced. If you’re not bothered about Blu-rays and don’t crave a TV with the absolute credentials a videophile demands, it’s well worth a look for those on a budget or looking for a TV for another room.