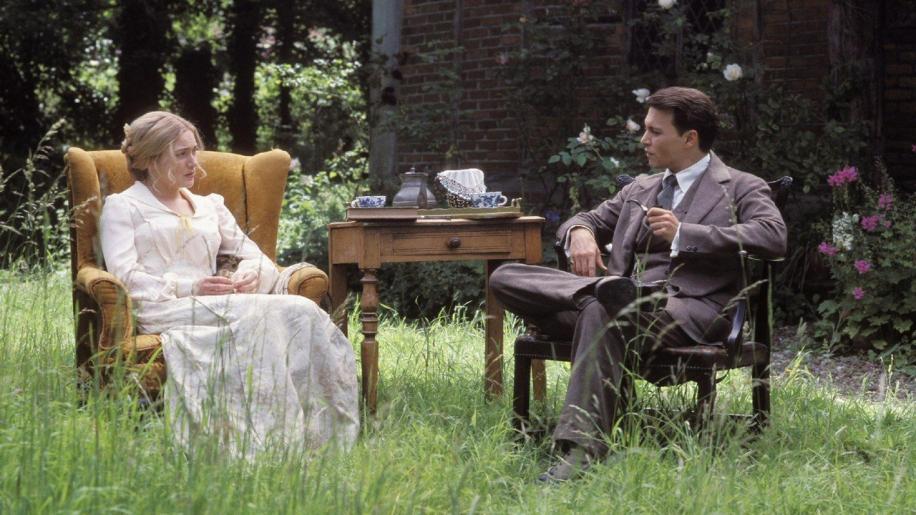 “You brought pretending into this family, James.”

Based on the play 'The Man Who Was Peter Pan' by Allan Knee, Finding Neverland takes a slightly fantastical look at how a small story about a boy who wouldn't grow old found its inspiration in the heart of a man who simply refused to. Whilst hardly pretending to be a dedicated biography of James M. Barrie, the celebrated creator of Peter Pan, the film's writer David Magee agreeably takes a crucial stage in the storyteller's life - the relationship struck up with widow Sylvia Llewelyn Davies and her four adventurous sons - and embellishes it with all the rose-tinted set dressing that he can muster. But the sprinkling of magic dust is left to the wonderful Johnny Depp, once again weaving a masterful spell with his enchanting, yet reserved, portrayal of Barrie. It's a role he seems born to play - he is indeed ageless, fanciful and imaginative and, much like Barrie himself, perfectly in tune with the child within. Really, it's hard to see anyone else take on the part with such obvious affinity. But let's remember, this is an extremely fanciful version of events, and the intention to enchant and move is displayed proudly upon its sleeve, so a lot of fact is nudged out of the way. No-one else but Depp could have reached so effortlessly, and convincingly, down into the heart and pure joy of creation without it feeling contrived and a touch fake. The earnestness of his performance and the delightful sensitivity with which he infuses even the merest of lines actually feels like Depp is sleepwalking through it, so good is he at fleshing out this type of character. And the Scottish accent is perfectly acceptable, too.

After a chance meeting with the boys in the park, Barrie, who seems to be at a crossroads in his stage-writing career, re-ignites the spark of inspiration that will lead to him creating his masterwork, Peter Pan. It is through the innocent bliss of playacting with the boys and transporting their minds to distant lands and adventures that allows his imagination to spin in a wholly new direction from the stuffy plays he had been writing. But although he needs the company of the children to ferment his fanciful seedbed they, in turn, need him. Having lost their father they now look to Barrie - who becomes less of a replacement and more of a favourite uncle - to bring the excitement and fun back into their lives. And, of course, the closer he gets to the family, the deeper the wedge he drives between himself and his somewhat brittle wife, played by Rhada Mitchell. Their relationship, however, had grown stale long before, and the scenes set within the gloomy marital home betray a dimming of Barrie's senses, almost chaining his creativity. The telling scene in which he and his wife retire forlornly to separate bedrooms - her's subdued and lonely whilst Barrie's door opens into a fairytale glen - shows just how far apart they really are. His wife is the one acting like a widow, leaving Kate Winslet's Sylvia enjoying the new lease of life that funboy Barrie brings with every visit.

“Young boys should never be sent to bed. They always wake up a day older ... and before you know it, they've grown.”

But the key to solving Barrie's fractured life is the Llewelyn boys' boundless desire to be entertained, particularly the young Peter whom, perhaps suffering the loss of his father the keenest, he strikes up the most resonant bond with. Played by Freddie Highmore, Peter is the emotional core of the movie and it is the awakening of happiness in his eyes that we long most to see. Barrie can see the germ of storytelling in him and gives him a book in which to compose his dreams. When annoyingly talented child actors seem to come along all too often, Highmore is actually a godsend. I don't think I've ever seen a more realistically vulnerable performance as his. Even if the scene at Barrie's country house about midway through - when Peter reasons that he is being lied to about his mother's illness and he rips apart the make-believe world that Barrie has offered him - feels a little shoehorned-in and an abrupt filmic mood swing, don't be put off. This little fellow is going to wring real tears from you by the end. To be honest, I wish somebody had warned me about just how devastating this element was going to be. The park bench sequence is such a choker it will imprint itself on your soul, I've no doubt.

Obviously, the attentions an older man exhibits for young boys - especially in view of another, more contemporary, childlike celebrity's troubles in his own Neverland - could develop an awkwardness in the viewer but, worry not, for Magee's script only makes the fleetest of references and Marc Forster's direction keeps the narrative graceful and innocent at all times. Forster, in fact, manages to walk another tightrope effectively, as well. In a story that quite plainly has tragic buttons to press and is fairly manipulative in terms of audience emotions, he nevertheless steers the film quite skilfully through its all-too-obvious course. Adult pain - Barrie's neglected wife and society's suspicions about his intentions with the widow Llewelyn and her boys - is conveniently downplayed and the precise nature of the writer's relationship with Sylvia is only alluded to once, and even then it is a moot point. But to dwell on such themes is actually missing the point by a mile. This is a celebration of innocence and how it should be clung to and never surrendered. Age and cynicism be damned. Life has far too many ill-fortunes to dish out and if fantasy is one way of dealing with them, who are we to say that it is not, in essence, the most effective. The many flights of fancy branching out from this film serve, not only to entrance with their theatrical beauty, but to let the story, itself, breathe. It's as though the movie, too, is dreaming. And the way that Forster weaves them in is gentle and enticing with the effects in keeping with the flair of their time - a stage-bound pirate ship with wooden waves and a shark raised on a wire, a wild west shootout with a painted backdrop. But their inclusion adds immeasurably to the pleasure of seeing young minds opened to the possibilities of the imagination. So it is wonderful to have the fantastic enter into a tale that, in reality, has none bar the whimsies of a few dreamers.

It's also great to see Depp reunited with a couple of his co-stars from Pirates Of The Caribbean, including The Office's Mackenzi Crook as the theatre usher. Even Paul Whitehouse appears as a butter-fingered stage-hand. But lending some extra Hollywood muscle we get what amounts to little more than a cameo from a bearded Dustin Hoffman and then a far weightier turn from Julie Christie as Sylvia's uptight mother. Christie, it seems to reveal, proves to be the genesis of Captain Hook in one of the elegant sleights of hand that Barrie's mind conjures up. The powerhouse triumvirate of Depp, the agonisingly tragic Winslet and the awesome Highmore take all the accolades though, with deliberately measured and understated performances that convey feelings soaring well beyond the sometimes trite dialogue. Mention must also go to the gorgeously lush score from Jan A.P. Kaczmarek that contains some lovely cues very reminiscent of James Horner at his most tender and gentle. It is a lilting score with a simple main melody unashamedly designed to tug on the heartstrings.

Despite some big names, Finding Neverland is really only a small scale movie that is quite sedate in pace and evocative in style. Content to allow the viewer to open up and let go, it wisely reserves the fantasy world it so tempts us with, to be one of our own creation. That it achieves its goal is testament to the child spirit within us all. Wouldn't you love to have your own Neverland at the bottom of the garden?