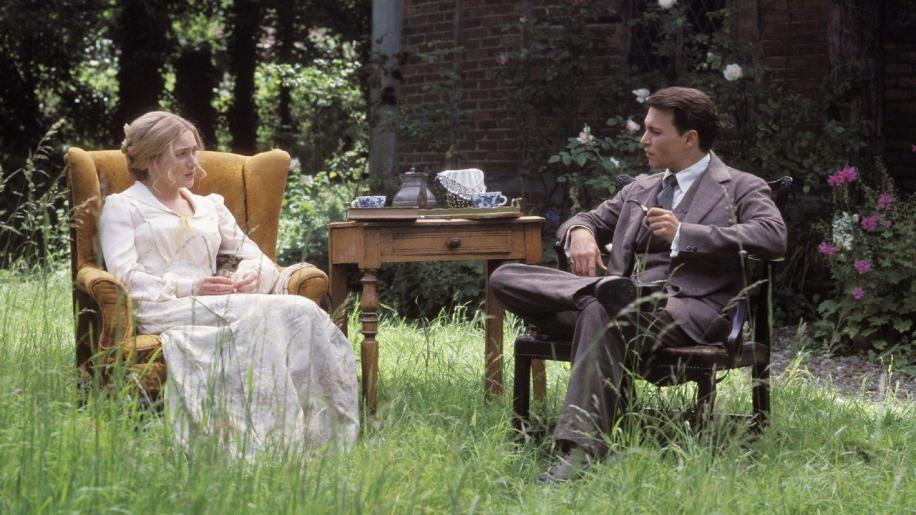 The story of Peter Pan is known to millions around the world. The story of the boy who never grew up is a legendary tale beloved of generations. This film is the story of a man who regarded it as a tragedy to grow up - the author of Peter Pan J M Barrie.

The truth of the story that inspired this film is one that shocks many people. It involves five tragic deaths (at least one of them suicide, possibly two), scandal, and disputed sexuality. It is a collision of circumstance and manipulation that almost takes ones breath away.

Marc Foster's 2004 film gets away with some blatant distortion of the truth by basing itself on a play and claiming only to be “Inspired” by true events. The film opens with the first night of one of Barrie's plays (his main occupation is a playwright). The play is a flop, and closes quickly but the actors are on retainers so Barrie has to come up with a play fast. He goes to the park to write, and whilst there meets four boys and their recently widowed mother.

He becomes enchanted with the boys, and they with him - apart from one of them, Peter, who remains aloof. Barrie is a fantasist and relates to the boys on an emotional level. He enchants them with his tales, and his abilities to bring them to life. The boys are fatherless, and Barrie very quickly becomes an almost surrogate father - neglecting his wife in the process. He gradually comes closer and closer to the family - until tragedy strikes.

The film is beautifully shot, and constantly blurs the lines between reality and the fantasies that Barrie weaves in a very clever way. When he is telling a tale of cowboys and Indians, for example, the film constantly cuts between the boys in their real garden, and them in the real setting that their imagination is providing for them. It is an extremely clever technique and fits the film extremely well.

The performances throughout are also uniformly excellent. Depp does a superb job as Barrie, capturing his stiff demeanour very well indeed. Winslet is less effective as the boy's mother - coming across as an early prototype for a tomboy. Julie Christie puts in a solid performance as the boy's grandmother, and the cast is fleshed out with an intriguing mixture of luminaries such as Ian Hart, Kelly McDonald, David Thewliss and a selection of comedians including McKensie Crook and Paul Whitehouse in serious roles. However, the main acting plaudits must go to Freddie Highmore as Peter, and Dustin Hoffman as Barrie's patron Charles Frohman. Both of these put in astounding performances, with Highmore in particular pulling the heart strings.

My main problem with the film is that it plays so loosely with the truth. When Barrie meets the boys in this film their father is already dead, but in reality he was friendly with the family long before this. The boy's father died a long painful disfiguring death, and had to endure watching his children playing with Barrie happily whilst he was confined to a wheel chair. The boys, too, did not universally accept Barrie into their lives. Although he cared for them all well throughout their lives, he was known to play favourites as they went through the formative years of puberty. The one surviving boy, Nico, denies any wrong doing ever occurred, and we have no evidence to deny this. We do know, however, that two of the boys died in mysterious circumstances. Michael, Barrie's favourite, drowned whilst swimming at midnight with another male student at University, and Peter himself eventually committed suicide by throwing himself in front of a train. George died tragically in the War.

None of these dark complications are mentioned in this film at all. Of course, the children's deaths occurred long after the time-frame portrayed in this film, but the airbrushing of the children's father out of the story is pretty cynical. Likewise, the film suggests that Barrie was not much of a success before he wrote Peter Pan - a fact that is clearly not correct.

Ignore this airbrushing of events however, and you are left with a winningly engaging and emotional experience. The presence of such great talent means that a tale that could become maudlin and overly sentimental is actually a moving experience. Forster shows a deft touch, handling scenes well and getting superb performances out of the cast, particularly the youngest.

The bottom line is that as a film this is a success, featuring a clever structure and great performances. As a biopic of Barrie, however, despite the performance of Depp this takes too many liberties to be considered definitive. If you wish to get closer to the truth, you would be highly recommended to pick up a DVD of the acclaimed BBC drama “The Lost Boys”.