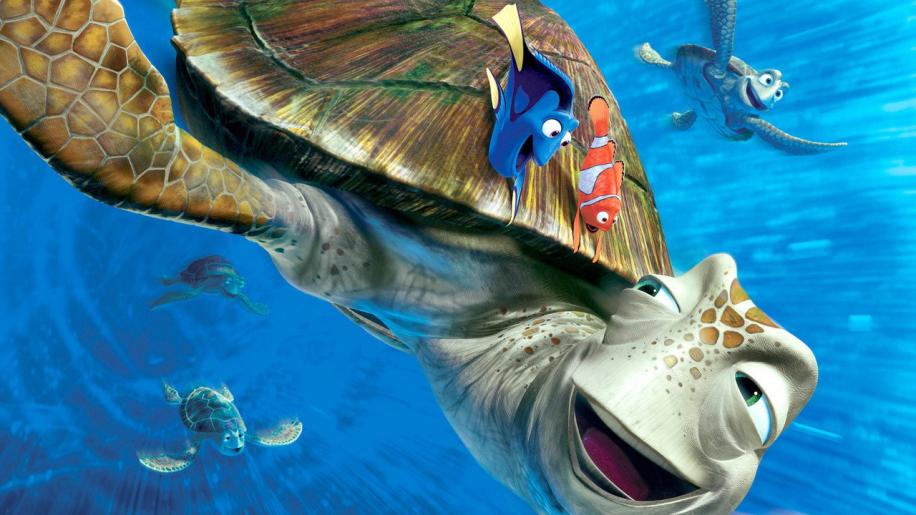 Marlin is a single parent Clown fish bringing up his only son Nemo and finding it difficult to venture into the real world. At the start of the film he has a wonderful wife a new home as well as hundreds of expected babies who are safely left in a small hole below the house waiting to hatch. Things however go wrong and the family are attacked by a barracuda, which kills his wife and eats all but one egg. Devastated Marin vows to bring up this last egg as his son and names him Nemo. Life would be great for the pair if Marlin would just let Nemo get on with growing up, but he is overly protective. This comes to a head when Nemo, playing with friends is told off by his father and rebels against his advice. Nemo is caught by scuba divers and taken away. Marlin then heads after his son and ends up running into Dory a regal blue tang fish. Dory aims to help find Nemo but there is one problem, she has short term memory loss which puts up many barriers to their journey. We meet vegetarian sharks, surfing turtles and seagulls (mate!) as Marlin and Dory head for Sydney to rescue Nemo.

Pixar are on a roll at the moment with every film they have released so far under their five picture deal with Disney, hitting the pay dirt. They made it big with their first film Toy Story in 1995 which gave us CGI animation to blow our minds, as well as a charming and funny buddy movie all in one. They followed this up with the equally successful A Bug's Life in 1998, Toy Story 2 in 1999 and then again with Monsters Inc in 2001. So the tried and test methods used to create these movies must be old hat by now and the stories not as funny as they used to be? I mean you can't just keep releasing movies and expect every one to be a hit can you?

Well when I first saw the early PR for this movie I honestly thought Pixar had lost the plot and they were doomed to fail. I mean look at most effects houses and their attempts at CGI water and Pixar want to base an entire movie under the ocean, I thought they were Crazy. Well funnily enough so did the production staff when they first started out on the project, it took time and skill to eventually make things believable, but they have managed to pull it off. In Fact they were so successful with test footage that it looked too life like, so they decided to pull it back a little and create a more animated feel. The under water scenes are breathtaking in their depth and realism, as a treat on this disc you can actually select from a number of backgrounds used in the movie as screensavers for your TV or Projector. The animation for the main characters is also spot on with the fish taking on human subtleties yet looking totally believable. The story also succeeds with it's main characters all having some flaw or other that they have to get over. Marlin is an overprotective father who needs to trust his son that little bit more and let go. Nemo has an underdeveloped fin which makes swimming difficult and Dory suffers from short term memory loss which causes all sorts of problems for her and her friends. But the story succeeds in showing us how the characters overcome these problems and provides a simple yet effective moral twist which doesn't hit you over the head.

The animation is stunning and the story wonderfully told with good action and humour. This is a movie for the whole family and can be viewed on enough levels to keep every age group happy, highly recommended.