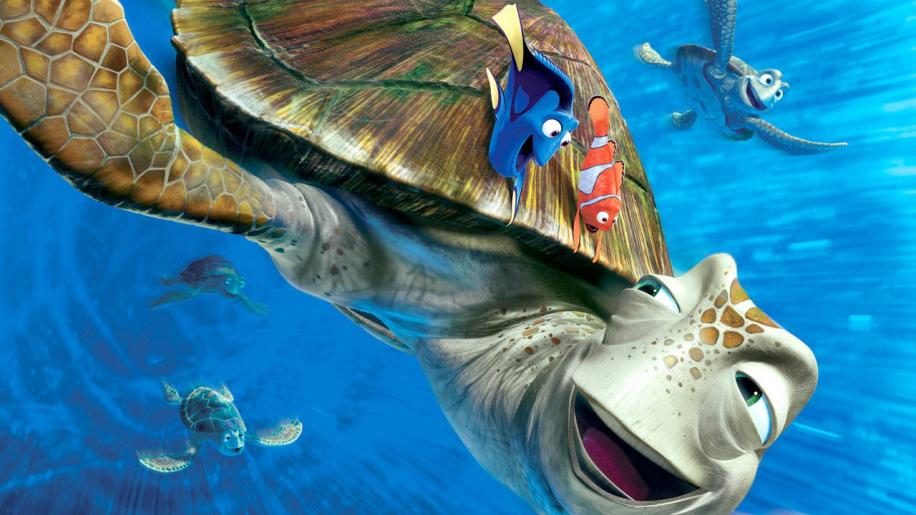 The picture is very nearly reference quality with the underwater world looking very realistic and with good detail on show. The backdrop to marlins home is stunning with the surrounding coral plants moving with the water and the light reflecting in a natural way. The characters do look animated and not as realistic animals but the facial expressions are detailed and look good. You soon forget you are watching computer generated images. Colours are rich and varied as we move through the ocean world, starting with rich tropical blues along with oranges and yellows which always look natural and do not suffer from any bleed. The open ocean takes on a deep mixture of blues to create a feeling of depth; you really believe you are far beneath the ocean.

The picture does not display the same encoding problems that were present on the R1 Disc, most noticeably in darker scenes with bright objects present such as the angler fish scene. The bright light looks good and the blocking effects seen on the R1 disc do not appear here.

Overall you will be amazed with the realistic and natural images which are superbly detailed and coloured, very good indeed and a marked improvement over the R1 encoding. Presented in Dolby Digital 5.1 EX and DTS 5.1 the soundtrack is again another work of art and works very well in creating the underwater world we inhabit for just over an hour and a half. But don't think this will be an aggressive surround fest like previous Pixar movies. The soundtrack is constantly present around you in every scene and working its magic when you probably don't even realise it is there. The constant feel of being underwater is mixed with great subtlety but turn it down and you soon notice it has gone and that feeling of realism goes with it. There are moments of split surround action such as the pelican chase across Sydney harbour, but the majority of this mix will do its job and you won't notice.

Dialogue is always rich and easy to follow and the music score is nice and dynamic. There are excuses to use the LFE channel to underpin some of the action on the screen such as the shark chase through the submarine where it all ends in the launch of a missile to devastating effect.

This mix will probably not be used as a set up disc like the beginning of Toy Story 2, but it is an excellent example of the very best in subtle soundmixing. There is very little difference between DTS and Dolby Digital soundtracks with the DTS mix welcome but not providing anything the DD track can't manage exactly the same way. The extras are certainly worth watching and actually go behind the scenes of the movie (unlike some PR featurettes which involve a lot of back slapping). There are a few games and one or two extras that are clearly based at the youngsters such as the studio tour presented by the kid who voiced Nemo and the character interviews and story time features. But there are some great extras to be seen such as the interactive commentary track where you get snippets from behind the scenes as you watch the movie. You can activate this as you watch the film or just go through the clips from a separate menu. The making of feature is fun and informative at 25 minutes and provides some useful information and behind the scenes content. There are a few features made for fun by the team such as the Exploring the Reef feature which although aimed at kids is humorous and fun for adults(well I laughed, especially every time he said his name).

Rounding off the disc are trailers and teasers, a sneak peek at The Incredibles, Design galleries, an encyclopedia of the ocean and the virtual Aquariums. Last but not least is the brilliant short film Knick Knack which is very funny. Well Pixar hit Gold again with this brilliant movie which can be enjoyed by anyone of any age. The AV presentation is also very good with some extras worth watching and a welcome DTS soundtrack is also included, recommended.