Die Hard in a Football Stadium 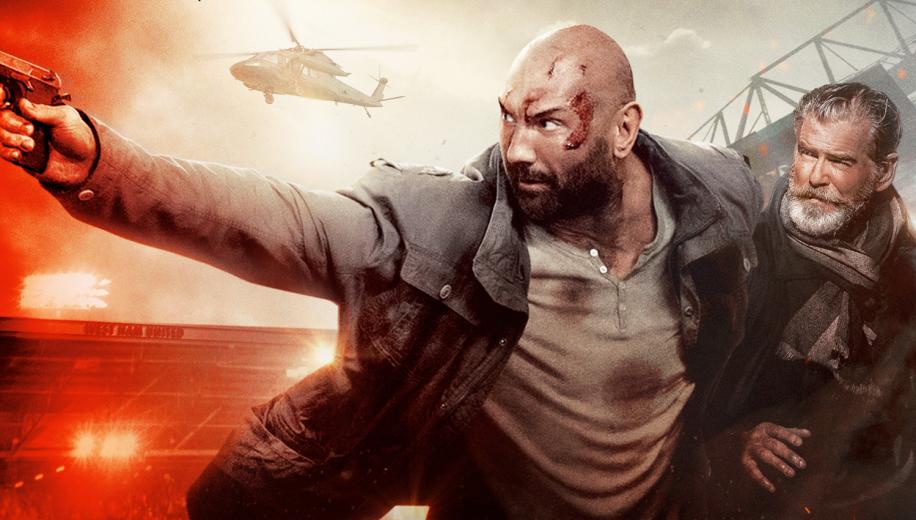 Back in the 90s, the Die Hard-on-a... formula was implemented numerous times with largely good results, whether on a warship in Under Siege, a train in Under Siege 2, a plane in Passenger 57, a bus in Speed, on Alcatraz for The Rock, and even on a mountain in Cliffhanger. Indeed, by the time 1994's Sudden Death came about, nobody even raised an eyebrow about the notion of Jean-Claude Van Damme busting terrorist heads in a hockey stadium during a match, a premise which turned out to be surprisingly good B-movie fun in the execution. Although the formula has not been used as often in recent times, a few throwback movies have made it to the Big Screen to remind audiences of how effective it can be; particularly Gerard Butler's strong Die Hard-in-the-White-House flick Olympus Has Fallen. The smaller screen, or at least the DTV market, has seen lesser but still modestly enjoyable efforts like Antonio Banderas' Die Hard-in-a-shopping mall actioner, Security, which probably affords a good starting point in terms of expectations for this latest offering.

Final Score is hardly new territory, perhaps apart from in the literal sense - by using West Ham's former home stadium setting - trading happily in all of the conventional Die Hard formula tropes it can muster, from the hapless accomplice, to the girl in danger, to the last resort explosives and even the disbelieving police. Improvised fights in kitchens, henchmen with a vendetta (the brothers in Die Hard), complications involving agencies working above the police, and crazy antics in high locations - Final Score wraps it all up in one competent and fairly action-packed package.


For a theatrical movie, Final Score is way out of its league, but viewed more as a DTV flick and it's actually quite good fun.

Whilst it's not original, the familiarity is curiously refreshing, played out in a surprisingly respectful fashion that honours the films that came before it, rather than merely retreads them. The simple but effective premise is explored well enough, affording a montage-driven opening scene-setter and a hint of welcome character background (that rings true with the girl) before we dive right into the mayhem. The action is effective, capturing the brutality of some of the fight scenes - which are all satisfyingly violent - and the scale of the bigger stunts and setpieces, notwithstanding the restrictive confines of the film's budget and setting (ok, so one explosion looks a little cheap, but it's otherwise never objectionably silly CG territory). Indeed, considering this stems from the same Sky Cinema Original Films brand which gave us the thoroughly derivative Hurricane Heist, and the modestly intriguing Anon, Final Score is something of a halfway decent result.

With Ray Stevenson not quite chewing enough scenery as the villain, and Pierce Brosnan hunting a paycheque, it's left to Bautista to take charge, with the scene-stealer from Guardians - who was also great in Blade Runner 2049, a mean villain in the unnecessary Kickboxer remake, wasted in Heist, and great in both the underrated gem that was Bushwick and the ensemble Hotel Artemis - making the most of this rare lead, even if the material is hardly taxing, and even if the end result will (hopefully) never be regarded as the closest he ever got to a Die Hard riff. For a theatrical movie, Final Score is way out of its league, but viewed more as a surprisingly competent DTV flick and it's actually quite good fun.

Signature Entertainment brings Final Score to Region B-locked UK Blu-ray complete with a solid 1080p/AVC-encoded High Definition video presentation framed in the movie's original theatrical aspect ratio of 2.4:1 widescreen. Hardly a glossy, big budget outing, Final Score is doubly disadvantaged by its British setting, but does its best to keep to the confines of its stadium centrepiece, and keep things modestly stylish within these limitations.

Clarity is reasonably decent, bringing forth injury detail, background textures and facial close-ups well, resolving the semi-gritty style with aplomb. There are some handheld-style action shots (like the halfway innovative bike sequence) which are a lesser grade, but still render well, and it certainly looks better than under the resolution limitations of Sky's current NowTV functionality.

The colour scheme is muted and surprisingly dour for this kind of piece - again, it's part-and-parcel with the UK setting, but then again the production embraces it and oftentimes goes for faux gritty instead, rendering decent, authentic tones with a few flashes of primary pizzazz. Black levels falter sometimes, but still provide mostly solid support. It's generally very good video - hardly demo - but still a decent presentation.

The accompanying DTS-HD Master Audio 5.1 track does a competent job with some healthy and occasionally even boisterous material, with an opening set-up segueing into background plotting before the terrorists take over and guns start cracking all around.


A very good aural representation of the material.

Dialogue remains well-prioritised, picking up the vocals even in the din of a football crowd - with the stadium backdrop affording the mix a strong and suitably atmospheric landscape to keep you immersed, occasionally even making you feel like you're at the match. Explosions are infrequent but still carry a hefty LFE edge, and gunshots are pretty punishing, with a generic but effective score pervading the piece. It's a solid offering which, whilst hardly demo, is still a very good aural representation of the material.

Signature's Region B-locked UK Blu-ray release of Final Score affords it strong video and audio - much better than you would have experienced watching the flick through Sky's outdated NowTV apps - as well as a single background Featurette, leaving it a solid release for fans to pick up.