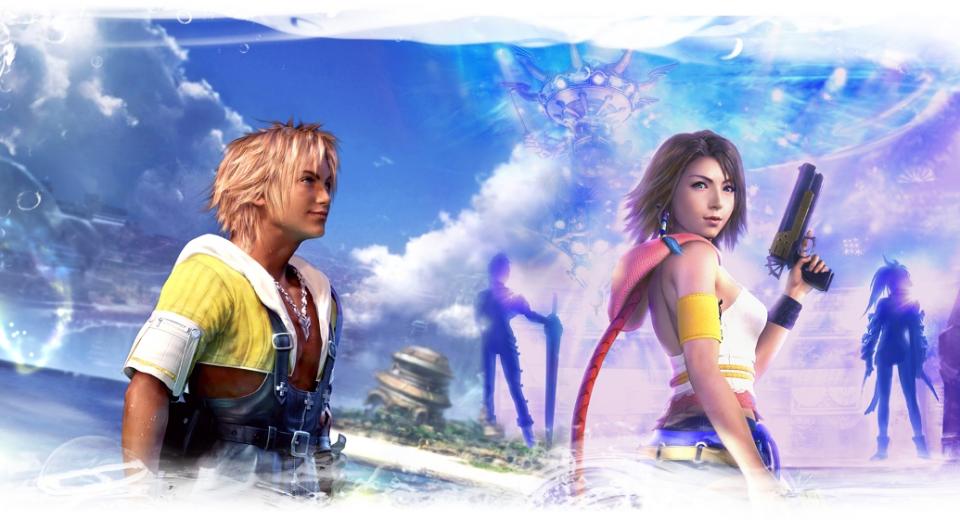 Final Fantasy used to do funny things to me, it made me feel funny inside.

Like standing on the edge of a diving platform, you held some trepidation before eventually diving off and knew, once you did, that you would find yourself immersed in a thrilling experience. But sadly those golden days have slipped us by and the PS2 games of old are something of a fond memory and the latest outings in the Final Fantasy franchise have been met with a frosty reception. As developers start to turn their attention to the new generation of consoles, there’s still time for a few final forays with the old machines before we set sail for what’s set to be a bigger and better future. Thankfully the HD remake trend hasn't been ignored by Square Enix, who have updated a number of their titles.
First they shipped out remakes of the various Kingdom Hearts titles and now we welcome in their latest effort - mastered HD versions of Final Fantasy X and X-2. FFX signalled a new era for Square as this was their first game on PS2 and also the first to feature fully-voiced characters, making this game somewhat of a technical achievement. But as many fans of the series will say, these two games were probably the last two truly great titles in the Final Fantasy franchise. It could be suggested that Square recognised this as they are treating us to both these titles in shiny HD on both PS3 and Vita so they have put every effort to make these games shine once again. The fact that we can even play these games on a portable device is something we could only have dreamed of when it first launched back in 2001. It’s hard to believe that they are over ten years old and Square have managed to make these game feel like they belong in 2014. This is something that other HD packages struggle with; making the nostalgic effect translate into the modern gaming industry without spoiling our memories. Thankfully, every single moment of FFX and X-2 can be cherished once more and not a single one has been spoiled. FFX follows the story of Tidus who is a famous Blitzball player from Zanarkand who suddenly finds himself torn away from his home into an alternate world where his home was destroyed some 1000 years ago. On his journey he joins a brigade of Guardians protecting the daughter of a summoner whose father was close acquaintances with Tidus’ father. It can get a bit complicated at times but given time, things get explained and come to light and it all begins to make sense. The being responsible for such events is Sin; a giant sea monster which attacks as a means of making people suffer for their previous sins in life.
Thankfully, every single moment of FFX and X-2 can be cherished once more and not a single one has been spoiled.
Taking place after the events of X, X-2 follows the story of Yuna as she investigates what happened to Tidus upon the completion of their journey in the last title. After having a continued interest in one another throguhout the game, Tidus and Yuna vowed never to be separated no matter what and she makes it her mission to be reunited with him once more. Controversially, the game featured an all-female cast which had never been seen before and was met with mixed opinions upon its release. However, it did feature interesting mechanics which made the game a somewhat more interesting experience despite the weaknesses that were highlighted within the story and script. Thanks to the voice acting this game really comes to life and the story is heart-warming and touching throughout with true emotions coming through the dialogue and cut-scenes. The added layer of detail through this re-release helps unquestionably and the transformation from PS2 to Vita is phenomenal. Sure it still looks like a PS2 game, with some character models still being blocky, but the sharpness and clarity of the image is truly a sight to behold. The video sequences were already of high quality beforehand but now, the picture quality on the OLED screen is superb and the jagged edges of old have disappeared for new, smoother lines and edges. The same treatment has been given to X-2 which was slated as the weaker of the two games, but it looks just as good as X and will make good use of your Vita’s capabilities. Both have been optimised for the Vita with the touch screen coming into effect as a means of making navigation a little simpler. A swipe from left to right during free-roam will allow you to quickly heal your team without the need to go through the menu screen. Doing the same action mid-battle allows you to change the Aeon summoning sequences which allow you to cut down wait time and get into the action quicker.
Special treatment has been given beyond that of the visuals in both titles as the audio tracks have been re-worked and mastered to give them more clarity and in some instances, bring them to the West for the first time. As is tradition with these Japanese titles, exclusive content is locked into the Eastern copies with us Westerners missing out. Now though we receive both games in their full form with no scrimping on content, making these games even more extensive if 50 hours or so until completion isn’t enough for you. As far as turn-based RPG’s go, this is probably still one of the best examples of the genre out there for your money and it doesn’t feel old. It still feels fresh, it feels snappy and manages to keep up to speed with the new players in the genre. There’s one thing for certain; you won’t find a story that’s as well-written and engaging in newer games as this is non-stop all the way through. You experience loss, love, anger and joy amongst many other emotions and you’ll want to see the games to their conclusion. Even if you pick up this package just for the first game, you won’t feel cheated as you’ll more than likely play this through time and time again. X-2 is the weaker game of the two, that’s for sure but even so it has been given such high treatment to make it shine on Vita that it would be rude not to even give it a go.

Makes a Hash of It

The X/X-2 HD bundle makes a very big claim for being one of the best, if not the best, HD bundle there has been to date. What's for sure is that if you enjoyed these games on PS2 you cannot afford to miss this package. Sure there are some weak and blocky textures still in there and X-2 may not have been as strong as X but the effort that has been put into these games to make them shine in HD is brilliant. Sadly though, the games aren't compatible with the Cross Buy scheme meaning you need separate purchases for the PS3 and Vita versions. X-2 is also a download only affair so don't expect two cartridges for your money and make sure you have enough space on your memory card for the pair beforehand. Minor issues aside however and this is a great outing for the two titles and proves that there is still life in the PS3 and Vita despite the arrival of the PS4. There is only one question; why haven't you bought it yet?