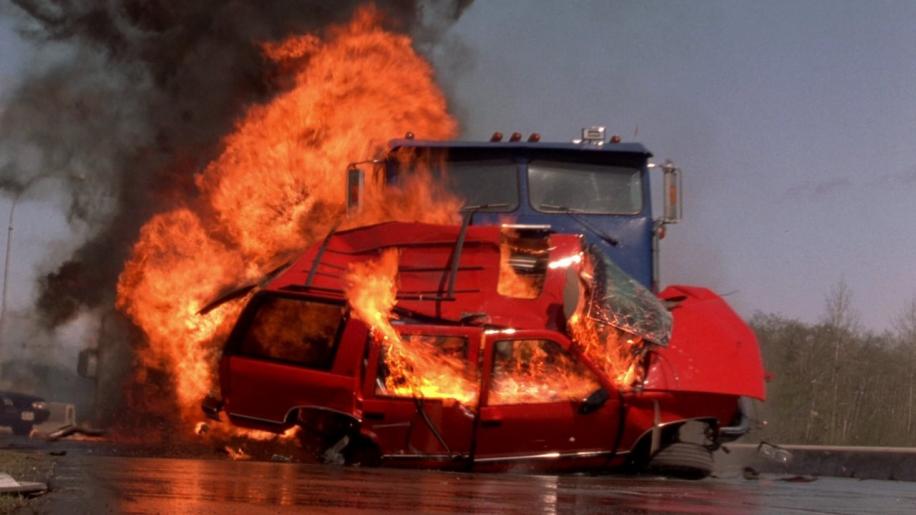 The first movie was an original take on the Teen horror genre where the villain couldn't be seen as it was death himself who was stalking the victims. The second movie builds on this premise with obvious rules laid out already and links back to the original movie.
Kimberly (AJ Cook) and her friends set out on a road trip and as they are about to enter the freeway from the on ramp she has a premonition of a huge pile up involving everyone on the freeway and the on ramp. As she comes around she is still sitting on the freeway ramp so positions her car to block the road and then tries to tell her startled friends what she has just seen. Of course they think she has lost it, as does the Police officer who arrives to see what is going on. Then on cue the carnage takes place a little further up the freeway, the on ramp vehicles and occupants have been saved from certain doom, but have also cheated death who will have to come after them again.
The second film is still fresh with ideas and some of the accidents that follow as each cast member gets what's coming to them are down right gore fests and very realistic looking. The plot is somewhat laboured with characters quoting the rules to each other now and again and discussing changes that occur along the way. The acting on show is not great, but is very good for this type of teen horror movie and keeps you interested in what is going to happen to them. The film is not as slick or as well developed as the first, but as an all out gore fest horror picture, it delivers the goods in original and sickly ways, with a few jumps thrown in for good measure.