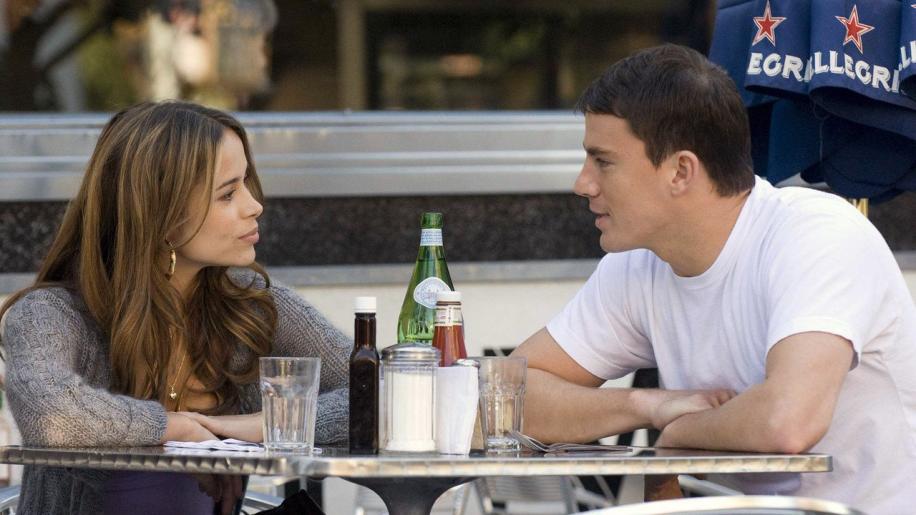 After spending almost half my life collecting movies - first on VHS, then on DVD and now on Blu-ray - I find it difficult to avoid being stubborn about the kinds of movies that I want to watch now. After all, I know full well that I am not going to like torture porn (a la Hostel), generic musical tripe (Hairspray, HSM), or anything with Orlando Bloom woodenly headlining in it, having experienced enough from each of those categories to have been put off for life. But if you allow yourself to get too set in your ways, you can sometimes miss out on those genre-breaking future classics which you would never normally have even noticed - after a decade of slating DiCaprio, I was amazed by his method-like performance in The Aviator, so much so that I have become a fan of almost every movie that he had made since. If I had stuck to my guns, and avoided his films ad infinitum, I would have surely missed out on some of the best performances of our generation.


My best friend is good for persuading me to see movies that would have normally gone right under my radar, like Open Range and There Will Be Blood, and - at the same time - I get him to watch some films that he - in hindsight - might have regretted missing, like Bring Me the Head of Alfredo Garcia or, more recently, The International and We Own the Night. Reviewing movies has also helped considerably - over the course of the best part of the last decade I have definitely had my fair share of 'random' films to review, opening my eyes up to things that I would have simply missed otherwise. Although I often get quite a lot of choice in what I want to review, sometimes my own choices can still be disappointing, and after a spell of movies that definitely fall into this category (The Informers, Duplicity) I decided that maybe it was time for a few wild-cards. Maybe I should check out a few movies that I would normally have never been interested in.


Fighting was suggested to me by someone who had not even seen it - and was definitely a movie which I would have probably stayed well clear of were it not for her suggestion. I have no idea why she wanted to see it - and pray that it was for a better reason than just to see topless sweaty aggressive buff men thump each other - but here I am, curious to see whether it does have any potential, and perhaps understand why this kind of film may have a following. So, did it break the mould and shatter my preconceptions?


Shawn MacArthur is busy trying to pay his way selling bootleg goods to unsuspecting customers. When he shows off his fighting skills, in self-defence, he draws the attention of Harvey Boarden, a shady manager of fighters working in the underground illegal fighting leagues. After MacArthur is recruited, he soon finds that he is in over his head, and that the league is underground for a good reason. Trying to get his life in order, address his anger management issues and get free of his new illegal fighting life, as well as perhaps find love in the process, MacArthur may just have to fight his way to freedom.


Fighting is essentially an illegal underground fighting movie dressed up to have the same appeal as a boxing movie, and pitched for a teen audience. It is AWOL with Rocky pretentions for the MTV generation. Now I have never particularly liked boxing, much less illegal street-fighting. Boxing is one of those quaint traditional pastimes - or habits - that society has allowed to survive intact despite the fact that it breaks all of the rules of modern social acceptance, and raises serious health and safety issues to boot. If it had been proposed nowadays, it would have surely never have been permitted, much like cigarettes and maybe even alcohol, but we have done it for so long that it seems to have escaped the law, now resting somewhere above it. As a student of the law, I never quite understood why it escaped an outright ban - the rules are quite simply when it comes to personal injury - you cannot sign an effective disclaimer against it, i.e. you cannot 'permit' another person to intentionally hurt you.


So, intentional physical violence towards another person will always be punishable at law, even if you consent to it. Except when you are boxing. When you climb into that ring, all of a sudden you are transported to another world, where you are allowed to intentionally and very purposefully ground-pound another human being into oblivion - and he you - without any fear of repercussions. You can give them brain damage; permanent injuries: break their nose, jaw, ribs, detach their retinas, all on purpose and all in the name of sport. Fair game?


Ever wondered where Mickey Rourke went during his acting hiatus between his glory days in the Eighties and his recent comeback hits? Well, let me give you a clue: it involved him transforming from someone lauded as one of the world's sexiest actors into being a man who often has to take roles where they can somehow work into the script a justification for why his face looks so messed up. What happened to him, you may ask. Oh yes, he went into that famous ring. And it was not as if he was even a bad boxer - he was pretty successful, on an unprecedented level considering arguably his first profession was as an actor - but that did not stop him having to have extensive reconstructive surgery on his cheeks, nose, mouth and jaw. For starters.


I have to say that I don't ever watch modern boxing matches - the display of such skills and such strength is not enough to justify knowing that somebody is getting permanently hurt out there: for my viewing pleasure. However, I have always had an interest in the life and the art of 'the greatest' himself, Muhammed Ali. Perhaps it was his way with words, his amazing poetry and philosophy - coupled with his graceful dancing feet and lightning-fast moves - that made him so much more than a vicious pit-fighter to me, but he was my sole weakness when it came to this bloodthirsty spectator sport. Yet, despite his being an idol of mine, despite my love and respect for the guy, and my fondness for his lyrical catchphrases in the face of adversity - was it really worth him wandering around, shaking, capable of only mumbling perhaps a couple words out of the hundred that come into his head due to the brain damage that he has? Parkinsons' disease. Of course, that can't have anything to do with getting hit in the head a few thousand times' by someone with a punch like a freight train. Sigh. Where is his poetry now?


Most nations have banned cock-fighting, dog-fighting, and there is a general abhorrence of this and the likes of bullfighting amidst much of the world's population. Why? Because it is, essentially, training animals to tear the hell out of one another for the pleasure of those who watch it and bet on it. So why do we still condone boxing? Fighting's tale of illegal, underground fights ignores the fact that - irrespective of whether or not they are legally organised, fighting for sport should have been banned some time ago.


Rant aside, there really isn't anything going for Fighting at all. It is a generic, glossy d-movie clone story, not even copying a prime Oscar-winner like Rocky, but actually reworking Van Damme's b-movie classic AWOL. Unfortunately, AWOL (aka Lionheart) never leant itself particularly to being highly regarded in terms of script or story, it ran entirely on the action side of things - seeing Van Damme in slo-mo doing the same spinning kick to somebody's face from 5 different angles. Fighting is the PG-13 family-friendly variation on this - i.e. utterly pointless. The story is extremely limited, the dialogue appalling, the characters clichéd and one-dimensional, and if you don't even have many fight sequences to entertain then, really, what is the point of it all? It is called fighting, isn't it? They might as well have called it bitch-slapping.


Terrence Howard. Why, oh why did you sign up for this mess? You did Crash, you were even quite good in Iron Man before the admittedly better Don Cheadle stepped into your shoes, but why agree to star in something as generic and vapid as this movie? Channing Tatum, I can understand. Your name makes me question what sex you are, you have the acting skills of Orlando Bloom and the biggest hit you have had so far is GI frakking Joe. Having done Step Up and Step Up 2, it is no wonder that you signed up for Step Up 3: Fighting. And Luiz Guizman? Wow, you've fallen pretty far from the glory days of Carlito's Way. Ah well.


The lesson from this film is twofold. A) Don't remake Van Damme movies, make them teen-rated, inject a few people who should know better than to act in this kind of movie and pretend that it is something with more substance than just your standard beat 'em up, even removing your most integral element - the punch - from the mix; and B) Trust my gut. When I heard bad things about this movie, got a bad feeling about this movie and didn't really want to see this movie, I should have just relied on all that. Not recommended, unless you enjoy being perpetually and severely disappointed.