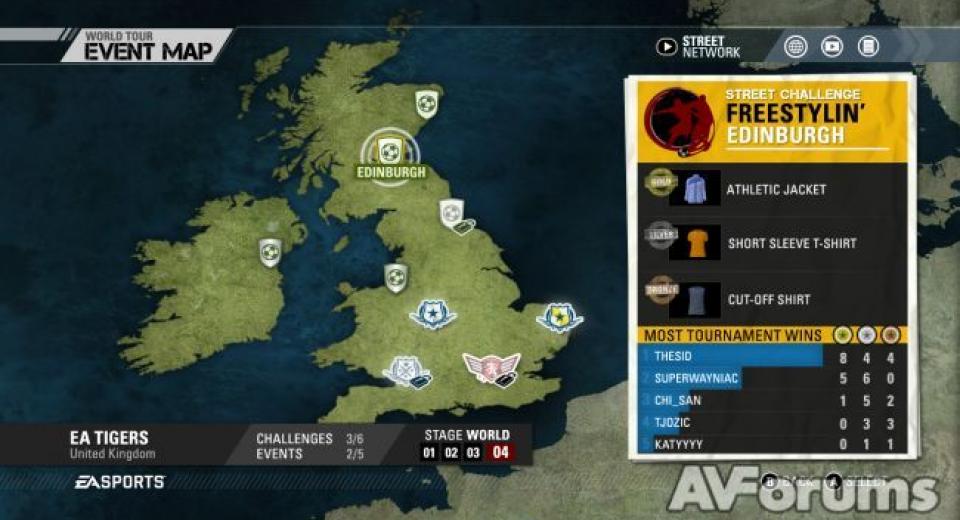 The core FIFA series has gone from strength to strength over the past few years, overtaking Pro Evolution Soccer as the definitive footie simulator in the eyes of many of the genre's fans. But FIFA Street, with its emphasis on close control and physics-defying trickery, never seemed destined to share the same success: three titles of diminishing quality resulted in the franchise being shelved. For a while it seemed that FIFA’s light-hearted little brother had been written off forever as a promising idea that never quite delivered, but now FIFA Street is back, with a new development team and a new philosophy.

The original games were distinguished by their colourful, cartoon-like art style featuring lanky representations of the world’s most famous footballers. This reboot has ditched that look entirely, a decision presumably necessitated by the shift to FIFA 12’s Impact Engine, which is designed to imitate ‘real world physicality’ - in other words, it’s supposed to make collisions between players look realistic.

And the alignment of FIFA Street with the core FIFA franchise doesn’t end there. Players are given the option of importing their ‘Virtual Pro’ (a user-created footballer) from FIFA 12 as their FIFA Street team captain, and a notable portion of the user interface and presentational style is lifted straight out of the main franchise too.

So it stands to reason that the players control in much the same way as in FIFA 12, with few notable exceptions. The right stick is still used to perform ‘fundamental tricks’ like feints and stepovers. ‘Special tricks’ like the Blanco Hop and the Rainbow Swirl can be pulled off by combining flicks and rotations of the right stick with various combinations of shoulder button presses.

A key addition to FIFA Street is ‘street ball control’, which is enabled by pulling and holding the left trigger while moving the left stick. While active, players plant a standing leg and move the ball around with their other foot. Intelligent use of street ball control lures defenders in, providing the opportunity to beat them with some of those skills.

Not that defending counts for much. Sliding tackles have been removed, so the options are to 'press' or to put a foot in. While the choice to favour the attacker is clearly justified in a street footie game, the Impact Engine makes challenging for the ball awkward and sluggish. On the full-size pitches of FIFA 12 there were relatively few issues, but in a tiny car park a moment of defensive hesitation that's supposed to reflect a slight loss of balance can feel more like an infuriating case of input lag. FIFA Street’s substance is in the World Tour mode. Players can import their Virtual Pro or create a new player to lead a team of unknowns to local, national, continental and ultimately world glory. The players in the squad begin with very few skills indeed, which can make the first few matches a bit of a grind. But beating challenges and winning competitions earn experience points that can be used to unlock new attributes, tricks, celebrations and kits for the team.

Unfortunately, the levelling system is woefully implemented. There’s no way to auto-level and squads can contain as many as ten players, so it’s easy to feel like as much time is spent buying skills as actually using them in a match.

The staple game modes are timed or goal-limited 5- or 6-A-Side matches. The most basic variation is Futsal, which is the same but with no walls surrounding the pitch. It’s intended to force players to be more precise in their passes and shots but in reality the stop/start effect of the ball going out of play tends to break up the flow of a match.

‘Panna’ is the only mode in which the tricks players perform are material to the outcome. It’s a 2v2 affair with small goals, in which points are accumulated by rounding opposition players in skilful ways, and ‘banked’ by scoring a goal (think The Weakest Link). It makes for thrilling and unpredictable matches in which a player's fortune can change in an instant, because a goal’s value varies depending on the trickery that went into the build-up.

The final mode is ‘Last Man Standing’. Both teams start with five players but lose one each time they score. The first team to have no players left is the winner. Penalising the team for scoring can be thought of as a kind of brute force approach to game balancing, but it works really well and leads to some frantic and exciting finales. For a game that requires a pass (costing 800 Microsoft Points if you buy a pre-owned copy) the paltry online offering is a real slap in the face. The main online options are to opt to play World Tour tournaments against human instead of computer opponents, Street Season in which you play online 'league seasons' with the aim of getting promoted (FIFA 12 players will be familiar) and Online Team Play, a 5-A-Side match in which all players are human-controlled.

The latter is interesting because after a few matches it's painfully clear that the chances of ever having any fun at all in this mode are very, very slim. FIFA 12's all-human matches are bad enough when played with strangers - it seems to be an indisputable law of online gaming that if every player in a simulated football team is controlled by an anonymous human being, at least one will try to score an own goal every time they touch the ball. And that's in 11 v 11 football, which requires team play. So imagine how it is in FIFA Street, a game focused solely on individual skill, that doesn't reward players for teamwork in any way at all. It's a valuable lesson about how developers' choices can disincentivise co-operative play.

And if defending is a chore in single player, it's downright infuriating online. Dealing with two human players often overwhelms the poor Impact Engine, frequently leading to the game's physics having a rather distressing emotional breakdown. Collisions are unpredictable, with no consistence players will either fall down with the slightest of touches or weather a shin-kicking from hell without so much as a break in stride. Of course, well-worked attacking play can look phenomenal, but all too often something in the players' movement will just seem off. All these criticisms stem from the same root: EA Canada’s mistake was to misunderstand the potential appeal of FIFA Street. Pared-down sports titles are a sub-genre in their own right that have more in common with each other than with the sports they represent. Take NBA Jam as an example. It worked because it cleverly balanced simple but finely tuned mechanics with an exaggerated, overblown style. The fact it was a basketball game was secondary to that core principle. The result was that NBA Jam had more in common with Speedball 2: Brutal Deluxe than one of the ‘full’ NBA 2K titles.

FIFA Street has taken a more serious path. But even if we accept the decision to go with the Impact Engine and move away from the series' arcadey roots, what’s really unforgivable is the developer’s imperfect implementation of the overhauled mechanics. The confined space and the emphasis on close control puts collision detection under the microscope and, unfortunately, exposes all the rough edges of the game’s engine.

This is never more obvious than during attempted ‘air beats’ (flicking the ball over an opponent’s head). Air beats are successful more often than not, but on occasion the attacking player will tangle momentarily with the defender resulting in an awkward stall in both characters’ animations. It's one of a number of moments of graphical silliness that happen too often to be ignored.

If only they had decided to embrace the genre’s traditional over-the-top mechanics, many of the oddities and smaller issues could have been overlooked, or swept up in the charm of a more casual experience.

Unfortunately, I'd guess that bringing FIFA Street in line with the core FIFA franchise was probably necessary in order to get the game made at all. The continuity between the titles has a double benefit: it rewards loyal fans who have ploughed hours into customising their Virtual Pro, are comfortable with the Impact Engine and FIFA 12’s general look and feel, while also presumably reducing EA’s financial exposure to the risk of reviving a struggling franchise.

Just like the earlier titles, FIFA Street is great fun in bursts. EA Canada have got a lot right here. Pulling off a slick chain of skills before burying the ball in the back of the net is as satisfying as delivering a high-quality combo in Street Fighter.

But a long list of tricks and kits to acquire should not be confused with depth, which Street Fighter has but FIFA Street is sorely lacking. Frustratingly, depth shouldn't matter; the only reason it's worth mentioning is because woven into the fabric of this game is an almost adolescent insistence on being taken seriously, or at least more seriously than its predecessors. This in turn demands from the player a level of critique that should be reserved for ‘proper’ sports simulators. FIFA Street fails to be a proper sports simulator, because no-one should have attempted to make it into one in the first place.

Someday, street football will get the game it deserves. Sadly, this isn't it.

The FIFA Street franchise was struggling, so after a fairly lengthy hiatus it’s no surprise we’re seeing a full reboot rather than a FIFA Street 4. Beyond the most superficial description of the game, there’s little here to remind players of the previous titles in the series. It’s out with the cartoon graphics and gamebreakers, and in with the main franchise’s technology and tone. If you’re after a distraction from FIFA 12, FIFA Street will provide some short-term entertainment. But gameplay frustrations and limited online options will see many copies gathering dust before the football season is over.