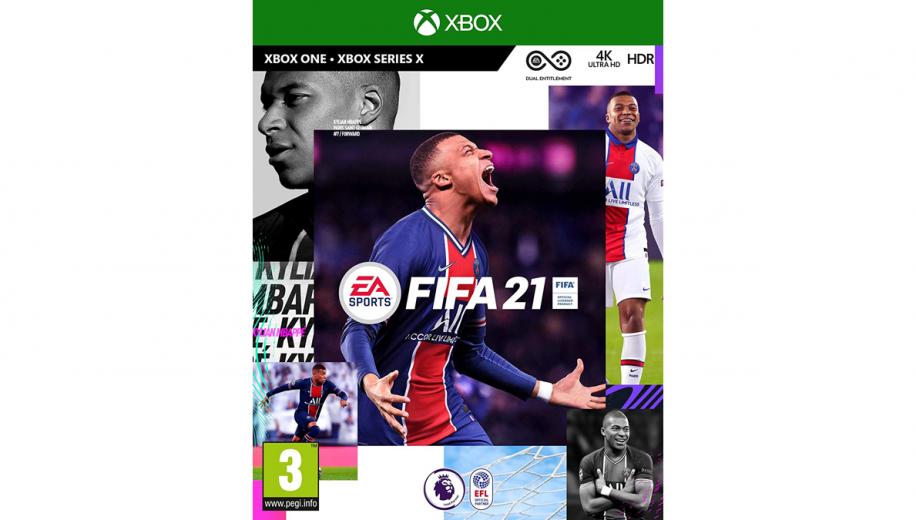 As sure as the leaves fall from the trees, so FIFA once again graces the early football season with yet another glut of footballing action. However, whereas previous years have had something notable to hang a few headline features onto, FIFA 21 may seem like rather more of an update, perhaps with one eye on the impending next-gen evolution. How much FIFA 21 will appeal may well depend on how seriously you take the game...

In fairness, the lack of something profoundly ‘new’ doesn’t mean that FIFA 21 doesn’t come without a host of very impressive improvements, and with a wealth of modes and playing options there can be few complaints about a lack of content. But, of course, the biggest argument against picking up this latest offering is how it compares to FIFA 20 or the last version you bought – and the truth is that how much FIFA 21 will appeal may well depend on how seriously you take the game, or at least how you play it.

Although there are no headline transformations, FIFA 21 does offer several welcome additions, most notably in terms of your online options and in Career Mode. Last year’s new arrival, Volta returns in a much more polished package and finally introduces full 5v5 co-op (an odd omission from FIFA 20), while the Featured Battles against AI teams gives a nice FUT-style progression to what is otherwise a massive exercise in arcade/street football with a hefty side-dish of frivolous style and customisation. There is something of a story element to it, although this is essentially just a two-hour tutorial with some cut-scenes thrown in but it’s enjoyable nonetheless. Speaking of FUT, that also sees the introduction of some new co-op elements, with plenty of weekly events and objectives to encourage more online teamwork (while the online Pro Clubs also now offers greater customisation to its squads). With Squad Battles against AI teams and Division Rivals against other players, you’ve now got plenty of ways to team up or fly solo and bag more points to level up your squad. One other welcome addition is that you can now customise your very own stadium.

Of course, there is still the scourge of microtransactions – or “surprise mechanics” as EA calls it when the gambling commission comes knocking – and that randomised, loot-based, play to win element remains, even if actually beating the opposition is still in your own hands. We all hate it, but as long as people keep buying into it and EA keeps raking in the cash it’s not like the company’s ever going to do the right thing without action being taken.

FIFA 21 does offer several welcome additions, most notably in terms of your online options and in Career Mode

On a happier note, Career Mode has been given a little bit of attention for the first time in a while. It’s not exactly a game-changer, and the Player mode is still much the same as before, but would-be Managers can now have a little more input and influence over the development of their team. This is largely due to a revised growth system that enables you to alter where players focus their training, or even what position they’re more capable of playing in.

A targeted approach to training can see bigger increases in a player’s growth, but in fewer areas than a more balanced routine – but it does mean you can easily turn a pacey winger into a clinical striker, or drop a CDM into your back four to fill a gap. Crucially age plays a factor, so sculpting a youth player is far easier than someone in their mid-twenties (and with seasoned pros you’re effectively fighting against their decline) and so you can feel a great sense of pride in bringing through a crop of young players rather than just churning through the transfer market as usual. You can feel a great sense of pride in bringing through a crop of young players...

For even more of a Football Manager vibe, there’s a new Interactive Match Sim system that lets you watch matches from an overhead perspective in speeded-up time, tracking stats, fitness and ratings as the clock ticks by. Best of all, at any time you can jump straight into the action yourself (for better or for worse!), whether it’s just to take a penalty or maybe try to turnaround a surprise 2-0 deficit. It’s still a few worlds away from the finesse of FM, but it’s a nice step in the right direction for that ‘hands-on’ managerial experience.

As always, the developer can lay claim to hundreds of gameplay improvements and, depending on your own ability or playing style, you may only notice a handful of them. One of the notable changes is the new Creative Runs which enables you to tap a shoulder and flick the right stick to send a player off on a run after playing the ball, making it a wonderfully ripe tool for slick one-twos and precision through-balls in the right hands.

An improved Agile Dribbling system offers up some quick-footed close control, allowing for some slick skills in 1-on-1 situations and, in general, the attacking play seems to a little faster and more fluent. Certainly the AI seems a bit more clued into an attacking dynamic, with wing play (and actual heading ability) coming back into our repertoire – although there is still a heavy onus on fast-paced strikers and well-timed through balls. We still suffered from our fair share of heavy touches, or delayed animations and button responses (pressing X to tackle but instead shooting two seconds after winning the ball first), but largely things seem more responsive. In contrast, defending seems a bit trickier, perhaps due to an improved AI for the opposition. Indeed, for serious pros there’s a new ‘Competitor’ option which makes even the most mediocre teams play like Barcelona in their prime – so approach with caution! Regardless, defenders still seem the least responsive to danger in the game, ignoring most attacks until they actually reach the 18-yard line and, perhaps in a more personal grudge, we’d find the player swap mechanic was not always the sensible choice (likewise the passing assist could be way off our intentions, but we’d mostly put that down to our own thumbstick woes).

Overall, FIFA 21 does seem a little slicker and quicker than last year. Much like in the current Premier League climate, we found ourselves scoring a bit more freely, while also leaking a few at the back – but who wouldn’t remember a 5-4 classic over a hard-fought 1-0? As a word of warning, though, we did find the game crashed a fair few times, especially when we tried to skip goal or post-match celebrations – having to replay one game three times, and suffering a few 3-0 online defeats for effectively ‘quitting’ the match.

As expected, there doesn’t appear to be a huge visual overhaul on the current-gen, presumably with attentions diverting to creating something far more drastic for FIFA 22 when the full power of the new consoles can be exploited (and with suitably higher expectations). That said, this Xbox One version looks as good as ever, running at 1080p and up to 60fps (dropping to 30fps when things get busy) – with Enhanced/Pro versions going up to 4K. On an aesthetic level, things do look much the same as last year, although some new interfaces make the likes of Volta and FUT seem a little cleaner and a bit more interesting to navigate around. However, the on-pitch action and intermittent camera shots seem largely familiar and, as always, the likenesses drop away pretty quickly once you get away from the bigger teams. However, the improved collision system works nicely, with players more actively riding challenges rather than clumsily falling over them and in general the games do look and play a little bit smoother than last year.

The ambient crowd noise can fill up a room and deliver a welcome sense of atmosphere...

Likewise, the audio hasn’t changed a great deal, although the Martin Tyler/Alan Smith commentary combo has been dropped entirely, so we’re left with just the Derek Rae/Lee Dixon mish-mash of awkward and often ill-fitting dialogue which grows old very quickly (we’re irked by Rae’s over-pronunciation of foreign names and Dixon’s constant criticism of keepers being beaten at the near post). However, as always, the game comes with a bumper soundtrack of licensed ‘trax’ for the cool kids out there and the ambient crowd noise can fill up a room and deliver a welcome sense of atmosphere into every match – albeit with effects that now sound very familiar to those we’re getting used to being piped into real world fan-free matches.

Each current-gen copy of FIFA 21 falls under EA’s ‘Dual Entitlement’ system which offers a FREE upgrade to the next-gen version – but it does come with some caveats. Primarily, you can’t upgrade a physical copy for a digital version if you buy a discless console (as in the PS5 Digital Edition or the Xbox Series S), as you need the original game disc, and subsequently a disc drive, to make it happen. But it’s fine with the standard PS5 and Xbox Series X, and also all digital-to-digital upgrades. This offer is in place until (exclusive reveal!?) FIFA 22 hits next year.

One other point of note is that while your unlocked Volta and FUT content and progress can be carried over, your Career Mode saves, Pro Clubs content and so on, WON’T – so ideally you might not want to invest too much time in building up those squads if you’re planning to get a new console in the near future. In terms of the specific upgrade details not a lot has been confirmed. That said, we’re expecting full 4K UHD as a minimum, and improved framerates up to a potential, if perhaps unlikely, 120fps, as well as much faster loading times. Similarly anticipated features would include improved lightning and rendering, along with enhanced animations and other on/off pitch nuances (players adjusting shinpads after a fall as one given example). Certainly it should provide an interesting glimpse into the future of FIFA on a technical level, but we’d imagine it will be some way off where we’ll see the series in a year or two.

Not For Me, Clive

Giving FIFA 21 a definitive verdict isn’t easy because it can mean something different to so many people. With the lack of bespoke new content, the casual gamer in us has no problem in dropping the score and pointing to how little it varies from last year. However, those who do invest a bit more time in the game will appreciate how even a few of the changes might improve and expand their own experiences of the game – though whether this is reason enough to splash yet another £60 on the game is up to you.

Perhaps most importantly to this particular take on things, regardless of the previous titles, FIFA 21 remains a largely incredible game of football, and with a wide variety of modes and almost limitless gameplay time we certainly can’t complain about a lack of content. The very big BUT, is that it does feel like something of a stop-gap between console generations, and one that definitely leaves room for improvement and genuine innovation.