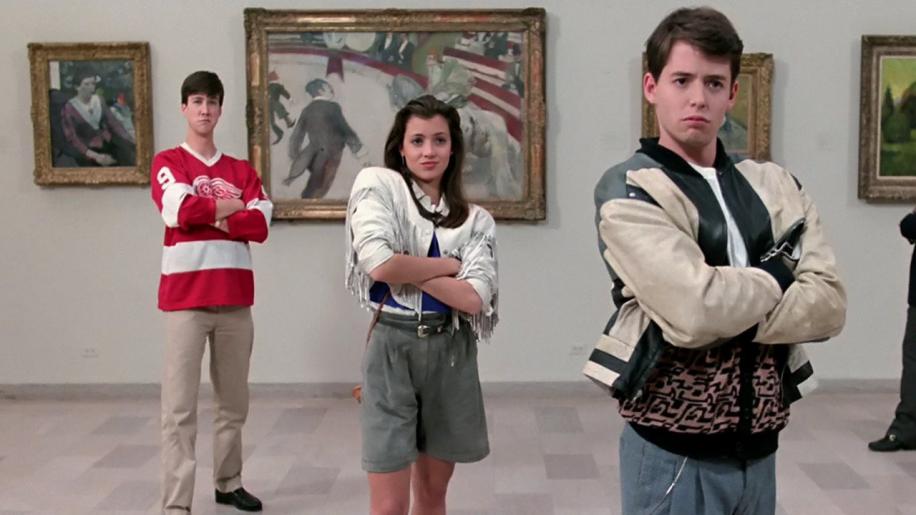 Fox has presented a theatrically correct 2.35:1 aspect anamorphically enhanced for widescreen TV's picture with an average bitrate of 6.60 Mbps. Wow, if it wasn't for the clothes that date the film I'd swear it was made a few years ago, the print is that clean. Through out the entire run time I spotted maybe two flecks of print damage, and I'm not sure about one of them. Colours are bold and suitably thick, contrast and brightness are set to give deep true blacks. The detail level is for the most part pin sharp, though it does soften ever so slightly in one or two places, and I don't mean the soft focus. Digitally there are no compression problems, though there was the merest whiff of edge enhancement in maybe two scenes. The picture is also free from grain. Like I say, it is difficult to believe that this film is over twenty years old looking at the quality of this print, quite outstanding.

I wish the same could be said of the sound tracks. The disc has been given three Dolby digital tracks, English 5.1, English 2.0 surround and French 2.0 surround. First up the 5.1, the good news is that it is clear, precise and free from hiss and distortion; the scene where Jean and Mr Rooney are 'stalking' each other in the house us beautifully silent. The range, however, is all rather in the middle, little top or any significant bass, except in two scenes. And it is precisely two scenes that we get any sort of surround action from the rears. The first and best scene is during the Star Wars theme with the Ferrari leaping over the camera, the second is the 'Twist and Shout' parade. Both had decent bass holding the score together and both made use of the rears to fill the track. Outside of these two scenes it is the front three, well actually the centre, that take care of the show. Now I realise that the film doesn't need a full on surround experience, but I must confess to being somewhat aggrieved by the distinct lack of effort made to the track, there are plenty of scenes that could have employed the use of the surround, and indeed the low frequency channels, to add ambience, but to no avail. Disappointing. The English 2.0 surround track is marginally better than the French as it has a fuller mid-range giving an overall better experience, though both are fairly flat with little separation; the 5.1 is the track to go for, as front heavy as it is.

First on the list is Getting the Class Together: the Cast of Ferris Bueller's Day Off featurette which reunites, though all in separate rooms, the major cast of the film for all new interviews. Exceptions are John Hughes and Mia Sara, both of whom are represented by archive footage. Also included are the casting agents Janet Hirshenson and Jane Jenkins. Without exception all have very nice things to say about Hughes, their filmic experience and what a good time they had. It is all a bit sugary but entertaining, somewhat light on content, none the less; padded out with film clips.

Next up is The 'Making of' featurette, this combines archive behind the scenes video along with interviews with cast and crew, all filmed at the same time as the above feature. Similar in tone and content but at least there is not as much film footage here.

On to the Who is featurette that again uses film footage and interviews filmed at the same time as the first feature, are we spotting a pattern here? These three features could have been made into one all encompassing 'making of' documentary, it would have been a lot more satisfying, rather than breaking it all up to give more listings on the back cover.

The Word According to Ben Stein, for me, is the best feature; it is an extended interview with Stein (of course filmed at the same time as all the rest) but in it he just talks about his life and experiences, also includes some archive footage. The man has in incredible dry wit, his anecdotes and stories are a hoot, the unofficial star of the film!

The lost tapes are a series of mock interviews conducted by Broderick with his fellow cast members videoed on the set of the film; extremely light on information but never the less quite fascinating to watch. Questions are all standard “what's you motivation” type stuff, but it is nice to see some interpersonal relationships between the actors on set.

The Class Album is a selection of wardrobe and publicity photos for the main cast members, use the remote to flick through them rather than a slide show.

Finally there are three trailers for other films available from Paramount.

The last word. The original DVD release had a scene specific commentary, so why it is missing from this set though is a bit of a mystery?

Ferris Bueller's Day Off seems to be one of those films that can endure the ages. It has universal themes that every generation can identify with and as such will continue to be watched and enjoyed for generations to come. As a DVD set Paramount has produced a reasonably good package, the print is stunning, the sound lacklustre and a set of new extra features should be enough to entice people to upgrade.