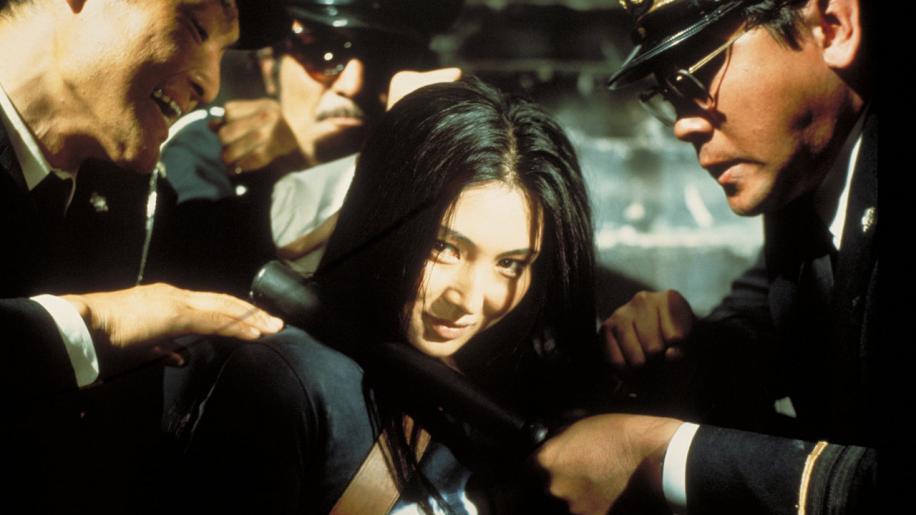 All of these films are presented in their original anamorphic widescreen 2.35:1 ratio using the usual standard definition MPEG-2 codec. They are some 37 years old, originating from less than spectacular film stock and with low production values in tow. Taking these on board though these transfers are not at all bad. Yes there is some minor print damage with specks of dust and hair floating across the screen once in a blue moon, especially in the first of the set, but in some way this actually adds to the presentation rather than detracts from it. There is grain and that cannot really be avoided. Exploitation has always had low production values but Female Prisoner Scorpion Trilogy raises its head above the parapet well.

Often shot at night or in the dim sewers the third film never shows any sign of blocking or other distracting artefacts. The shadow detail is excellent from the dark subway tunnels to the murky sewers beneath the city. Contrast is excellent and depth is more than sufficient. Much the same can be said about the first two with the dark dampness of the prisoners cells coming across well; there is some crush but nothing really to write home about. Some of the outdoor scenes in the first two are bight and colourful yet no blooming of the whites to speak of.

Colours are bold and brassy, often timed to present a feeling the director wanted to get across with the second often flashing colours between takes to produce a manic affair. The third offers a lighter palette and is used to achieve some pleasing effects. All of the colours on offer through the series are well defined and constrained with no sense of bleeding, banding or blocking. From an SD release this was indeed pleasant on the eye.

The encoding is fine, as is the case when comparing to Blu-ray this is indeed softer than I would like and perhaps softer than some other SD releases I have. That aside there is some minor enhancement on some objects, especially when starkly contracted against the crisp backdrop. Ultimately though none of these make watching this trilogy any less enjoyable. All offer a Japanese Dolby Digital 2.0 192kbps track, there is no English audio track but, as expected, the Japanese audio is backed up by a good set of easily read subtitles. Like the video, and in fact the genre, the sound is bold and up front. Expect your surrounds and LFE to have a day off for once. The spoken word is sparse in this film, especially from our heroine Nami, but when it is you'll never miss a syllable of the Japanese tongue.

The main focus of the audio comes from the enthralling sound tracks themselves and some of which you will undoubtedly recognise from Tarantino's Kill Bill double feature. A product of its era it's dramatic, enhancing the scenes on offer. During times of emotion or compassion the track becomes a little slower, softer almost haunting in its execution.

Panning between your front speakers is subtle, all of the dialogue and most of the track itself remaining firmly locked to the centre channel. At the end of the day though the audio track on offer here perfectly complements both the video and script. All of these films only give us a trailer as an extras package and this is somewhat of a disappointment. The trailers themselves are a good watch though as they do represent a sort of sub culture in themselves and were, at the time, well regarded in their own right. There is a French release of the first in the trilogy which does have some additional material, and it was a great pity that Eureka for whatever reason didn't or couldn't include that in this set. Please give these films your full attention, especially if you're a Tarantino fan. It's a perfect example of the genre at the start of the 70s from which so many have based their own works on.

As well as encompassing all of the usual exploitation characteristics, sex, violence, revenge, some dramatic stylised acting and odd camera angles, the director adds some loving touches of his own. Ultimately this is Nami's story; her initial capture and incarceration, her escape then her wandering in a world still full of exploitation and injustice. There are some interesting side stories to look at especially in the third, but it Nami's journey that we must concern ourselves with here.

With some excellent scenes, colours and camera angles, you'll have an enjoyable weekend looking back on this trilogy, then come to realise where so many of our current favoured directors gleaned some of their own inspiration. Fantastic cinema history for a genre which is perhaps only in recent years reaping its full rewards.