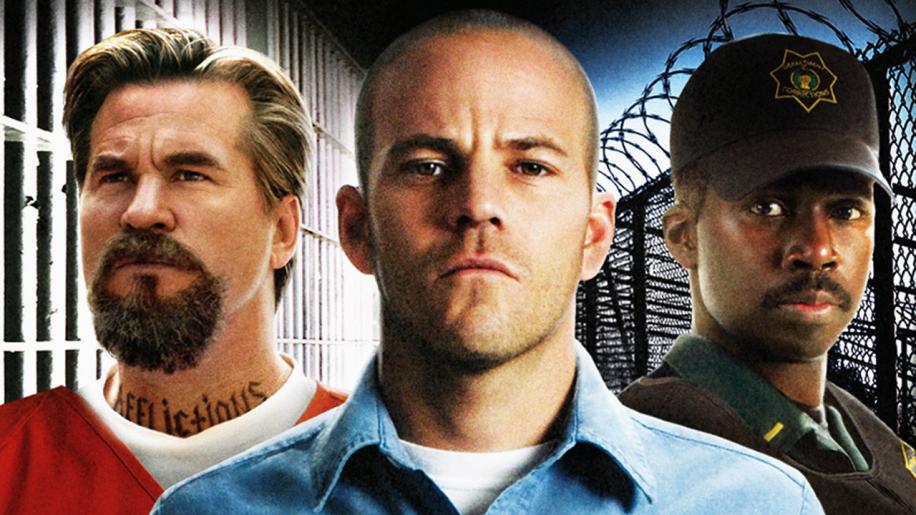 There have been some excellent prison based dramas throughout the years; the stunning tale of comradeship in The Shawshank Redemption Mervyn LeRoy's I Am A Fugitive From A Chain Gang, Papillon to list a few of some of the finer examples out there. In 2008 though Ric Waugh migrated from his usual stunt work to write and direct this story of a man incarcerated after killing a man who was burgling his family home.

Once convicted Wade Porter (Stephen Dorff) finds himself embroiled in a situation he has no control over and ultimately he finds himself not doing normal time but down in the modern version of 'the hole', now known as the Special Handling Unit or SHU for short. Broken and wondering how his life has come to this he finds it difficult to come to terms with not only the brutality of life inside but also the general disregard of some prison warders notably one Lt. Jackson (Harold Perrineau). With his life crumbling he finds some form of companionship with the most unlikely of people, another convict John Smith (Val Kilmer) now in the SHU as no other prison can cope with his destructive influences.

I can't say I've really ever been a fan of Mr Kilmer, his only noteworthy roles to date being Tombstone and The Doors; I have often found him wanting as an actor, I find he neither understands the nature of the role in question or proves to be aloof as though somehow the part was beneath him. His career never really took off in the same way as some of his other contemporaries and now although he still stars in some main feature films they tend not to be the blockbusters he was once offered. Stephen Dorff on the other hand whilst being a reliable and on my own opinion consistently pleasing actor to watch has never really made it into the main limelight. Here in Felon they seem to be perfectly cast against each other. Dorff yet again giving a performance which whilst not jumping off the screen is still more than adequate for the task in hand. It is Kilmer though who has the most interesting character, down played somewhat for Kilmer and for that in itself I enjoyed his performance. For the character he was playing I expected another grinning over the top performance but his character is almost a mirror for Dorff's in that he took the law into his own hands many years ago and now has almost become a jail prophet in the same vein say as Michael Peterson or at times a saner Charles Manson.

It seems to be vogue these days for people involved in the film industry to take the reigns and think they can become a director overnight. The Strause brothers tried it, and failed, with AVP2:Requiem and Ric Waugh now moves from the stunt world to both writing and directing. On the whole he hasn't failed at this choice but really he hasn't set any bushes on fire either. The deterioration of a man has been done before to great effect in such films as Falling Down and prison dramas are ten a penny with only a few reaching the top of the pile. Unfortunately Felon doesn't really make the grade in either of these two genres. There's nothing overly bad about the film as such it's just that there's nothing in there of any weight either and it seems as though you're just watching the film to kill a couple of hours.

The storyline itself is a rather weak affair stumbling form one cliché to another using stock characters we have seen all too often before. The ultimate direction and end of the film is telegraphed early on and from that point on it's a lot of repetition of how Dorff's life came to be this bad and a few gladiatorial beatings in the prison 'yard'. This really just doesn't gel after a while and becomes a little stale; the question of who really is the baddie is raised between the inmates and the sadistic warders but again that plot line has been done to death too many times before to much better effect that this rather anaemic affair. In what should usually be a character driven affair (and implemented to such a great degree by the earlier mentioned Shawshank Redemption) is never really expanded on to any degree within this film and this is where the film lets itself down in my eyes.

There are some initial early scenes after Wade Porter has been jailed which are quite unnerving, the initial time in the county jail, the first time in SHU as he realises just how insane his life has become and during these moments you begin to wonder what your own reactions to these events would be and from my own point of view I found myself thinking that I would survive about 5 minutes... an unnerving prospect if there ever was one. From this point of view it worked well but it never extrapolated that feeling. Similarly his fiancée is shown visiting and how her life and that of their son's life has deteriorated due to events. Again this is quite heartfelt but never played out too well or taken to any conclusion other than the too sugary sweet ending we all knew was coming a third of the way into the film.

I think that if Ric Waugh perseveres then he might come up with something a little more unique and original so it's not all doom and gloom, it's just that this initial feature of his ran out of steam very very early on into the storyline at which point it was replaced by standard plot lines and no imagination whatsoever. A better Kilmer than I have recently seen admittedly but in all reality that could have been due to the fact that his part is rather thin and not very demanding of any actor. Harold 'Lost' Perrineau pops up as the prison guard inflicting misery on the prison population but he's no Clancy Brown. Perhaps worth a rental if you like a little prison brutality but don't expect much more than that.