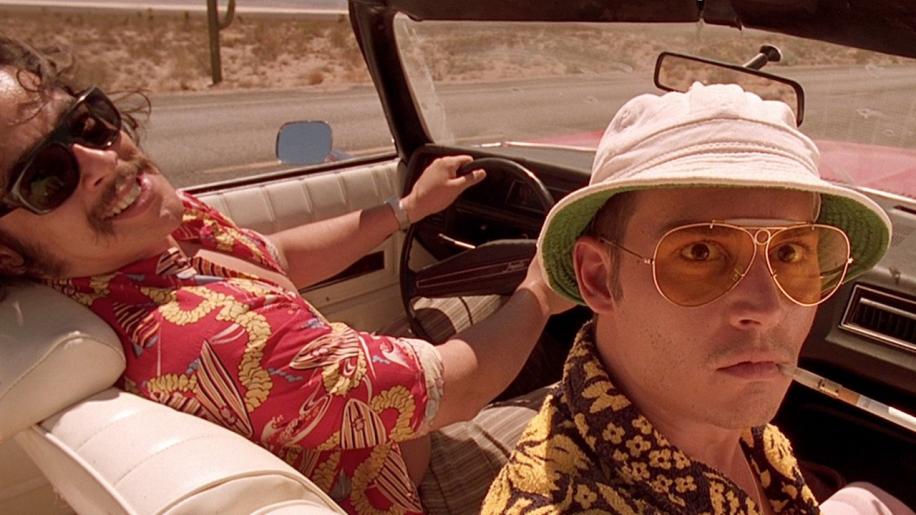 'Fear and Loathing in Las Vegas' was released in 1998 and was directed by everyone's favourite (American!) Python, Terry Gilliam. The movie was adapted from the novel “Fear and Loathing in Las Vegas: A Savage Journey into the Heart of the American Dream”, which was written by Hunter S. Thompson; a completely eccentric lunatic who publically dabbled in all sorts of narcotics (this probably explains why this movie is so off the wall). Although definitely a creature of the love generation (with regards to substance abuse), Thompson was also a highly respected journalist, with his seminal masterpiece first featuring in Rolling Stone magazine in the early 70's. "Fear and Loathing" (the novel) is an autobiographical piece and although I'm not too sure how much of the insane happenings are true, Thompson's infamous reputation leads this reviewer to believe in a high percentile of the content.

The concept of adapting 'Fear and Loathing' for the big screen had been kicking around years before Gilliam's incarnation came to light. Marlon Brando and Jack Nicholson were lined up to play the two main protagonists, as were Aykroyd and Belushi. While these productions would have been extremely interesting, it's the perfect combination of Johnny Deep and Benicio Del Toro who feature in the version which made it. Depp was approached to star as Hunter.S Thompson (under the pseudonym Raoul Duke), when Thompson himself decided that there was no other actor capable of capturing his persona on screen (perhaps a touch of vanity here!). Bruce Robinson was originally hired to take the helm but creative differences with Thompson lead to the 'Whitnail and I' director leaving the project. It became clear that it would take a suitably off the wall director, in conjunction with a cast who were completely open to new (and potentially career damaging) methods of acting, to pull off the adaptation in a convincing manner. Enter Terry Gilliam who, having previously delivered such mind bending and stunningly creative movies such as 'Twelve Monkeys', 'Brazil' and 'The Adventures of Baron Munchausen', was the perfect candidate. It's also worth noting that Gilliam wrote the screenplay as well (even though he was forced to share credit with other screenwriters). So, after many years, the perfect crew were assembled to do 'Fear and Loathing' justice.

The movie opens with a fantastic line:

We were somewhere around Barstow, on the edge of the desert, when the drugs began to take hold

Raoul Duke, a journalist, and his Samoan attorney, Dr. Gonzo, speed down an interstate freeway in a fire red Chevrolet convertible. Duke has been given an assignment covering the prestigious Mint400 motorcycle cross-desert race in Las Vegas. Obviously realising that a trip to Vegas is no joke, Dr. Gonzo advises his client that they must arm themselves to the teeth for their journey. Following this sound piece of legal advice, the Chevy's trunk contains the following; two bags of grass, seventy-five pellets of mescaline, five sheets of high-powered blotter acid, a saltshaker half-full of cocaine, a whole galaxy of multi-coloured uppers/downers, a quart of tequila, a quart of rum, a case of beer, a pint of raw ether, and two dozen amyls! Armed to the teeth indeed! Smoking potent spliffs and taking copious amounts of acid on the way, the two finally find themselves in Vegas. Realising that camping in the desert and documenting 400 or so dirt bikes as they scramble for position is not what Vegas is about, especially with access to copious amounts of drugs, Duke abandons his coverage of the race and heads to The Strip with Gonzo in tow.

There's no plot per say in 'Fear and Loathing' but rather a narrative driven expedition into the depraved underbelly of Vegas. There are plenty of standout segments throughout that offer some incredibly dark humour as well as some great slapstick comedy. A standout for me is the crazy Bazooka Circus sequence, wherein trapeze artists above the casino floor “deliver” a space baby while Gonzo and Duke, off their faces on ether and mescaline, attempt to get off a revolving bar. Although this sounds completely bizarre it sums up the overall feel of the movie pretty accurately! The andrenochrome sequence is equally as memorable but for different reasons - it offers a horrifically realistic and psychotropic recreation of a hellishly bad trip (even though the actual drug is made up), with Duke's face reddening (and perspiring) to the point of explosion as the mutated Gonzo (complete with six breasts on his back) utters the immortal words:

The pacing is manic, with Gonzo and Duke taking turns to step over the line of insanity, one seemingly just teetering on the right side of his senses to keep the other in check. As they run a savage burn on one hotel and abandon coverage of the Mint400, they simply drive across town to another hotel; that's the beauty of Vegas I suppose! Duke's recorded narrative lets the viewer know what's going on and also explains the many flashback segments, wherein Duke hazily recalls their degenerate behaviour, the remnants of which are strewn all over their flooded and annihilated hotel room(s). The movie takes a much seedier downturn in the second half of the movie, when Gonzo leads a young teenage girl astray (having spiked her drink with acid) and threatens a beat-up waitress at knifepoint when the pair find themselves in uptown Vegas (the area you go when even the minor casinos off the strip won't tolerate your behaviour). While the majority of the movie is fun and light-hearted (in this reviewer's twisted opinion!) these scenes are always a little more difficult to stomach.

Gilliam has created a fantastical and debauched vision of The Entertainment Capital of the World circa 1970, wherein its denizens are party to the antics of Gonzo and Duke, who are completely ripped off their faces for the duration. He uses many different filters and techniques to recreate the Sunshine Acid (and other drug) induced trips and introspective nightmares which Duke and Gonzo experience. His camera is constantly roving and panning, capturing the on screen insanity from many different and unusual angles. The camera moves and sways in an off balance manner, accentuating the narcotic fuelled staggering of the two main characters and serves to really draw the audience into the drug induced microcosm of Duke and Gonzo. The picture is incredibly busy, with enough background activity to make repeated viewings a rewarding activity (especially on BD). On a technical and creative level I rate this movie as Gilliam's finest work (let's hope that the 'The Imaginarium of Doctor Parnassus' can top it). In perfect complement to the director both Depp and Del Toro deliver career defining performances in this movie. Depp in particular is stunningly good as Duke - he even borrowed some of Thompson's clothes, which he wears in the movie. He literally becomes an overblown caricature of Thompson, walking in a bow legged manner (check out his walk when he's on ether) and moving with a jerky mannerism that is reminiscent of Jack Sparrow on crack! The range of facial expression which Depp pulls off is astounding, each one building on the madness that is Raoul Duke. Del Toro, having put on 45 pounds to play the overweight Dr. Gonzo almost (but not quite) matches Depp's performance. His wild portrayal of the reckless, highly volatile knife wielding Gonzo is very impressive and at times his performance is very intimidating; the type of guy you would not want to meet in a Vegas elevator! The madness in both these fine actors' eyes in many of the scenes lead me to question if they were actually after consuming illegal substances (the most enjoyable method acting ever perhaps!). The movie also features a large amount of cameos from new kids on the block (at the time), namely Christina Ricci , Cameron Diaz and Tobey Maguire. Some seasoned veterans, such as Ellen Barkin, Gary Busey and Katherine Helmond also pop in for a scene or two (as does Gilliam himself during the dirt bike scene) to add to the madness and then casually disappear. Keep your eyes peeled and you will also spot Flea (from the Red Hot Chilli Peppers) and Lyle Lovett! The two incredibly memorable central performances are backed by an outstanding ensemble cast and form the perfect package.

At base level, even after countless viewings, I'm still not too sure what this movie is about. The political aspect never really held any water with me, with the included shots of the Civil Rights Movement and the Vietnam War only mirroring the hellish like scenes in Vegas rather than conveying any “make love not war” message. I believe the core of the movie revolves around the concept that the world is moving on and steadily changing and no amount of hallucinogenic drugs will hold onto the American ideals of the 60's. I have given up in trying to interpret Thompson's social commentary on the continuous failed search for the American dream and just enjoy this movie for what it is; a completely wacky journey into 1970's Las Vegas, with two of the most undesirable tour guides on the face of the planet. The depraved and twisted mind of Gilliam makes this movie work on so many levels (as do the stellar central performances) and it's a masterpiece of modern cinema. The pages of Thompson's novel contain some very difficult scenes to shoot and there is not one instance during the (relatively) hefty run time where Gilliam's confidence in his vision falters. Sure the movie has aged a little and some of the special effects (such as the lizard orgy) are a little dated but the movie retains its cinematic impact and zany charm (hard to believe that it's twelve years old). 'Fear and Loathing' is without doubt an unpleasant experience the first time around but with repeated viewings its appeal increases and so it has gradually clawed its way into this reviewer's top ten over the years. When released at the box office the movie flopped, not even recovering its modest budget. However, as is the case for many great movies, the subsequent DVD release (especially the Criterion Collection Special Edition) saw sales skyrocket, earning this movie “cult classic” status. I think that Thompson's homage to Gonzo perfectly sums this movie up to a tee:

There he goes. One of God's own prototypes. A high-powered mutant of some kind never even considered for mass production. Too weird to live, and too rare to die.

Highly recommended, but this will most definitely not be everyone's cup of tea so approach with caution!

For fans of Thompson's work, there's the screen adaption of 'The Rum Diary' on its way later this year - a movie I'm looking forward to immensely; with Depp once again starring and the director of 'Withnail and I' (Bruce Robinson) at the helm.