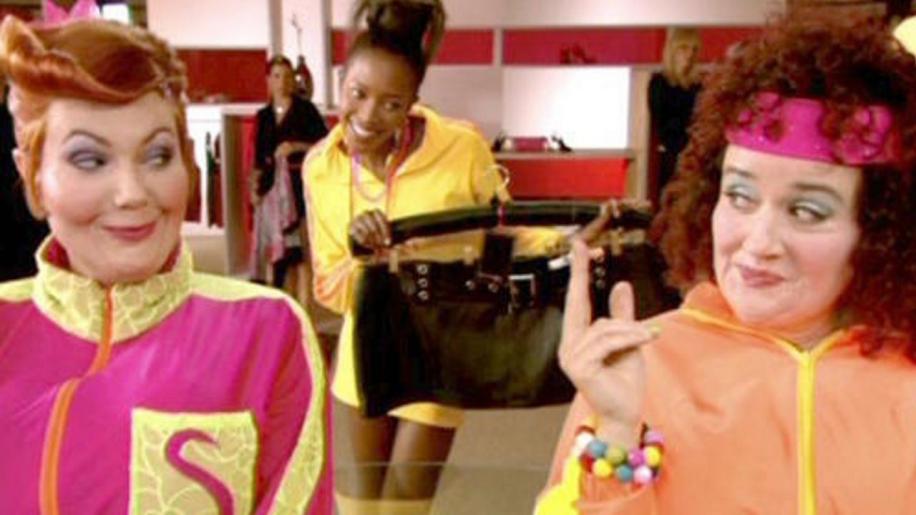 The Fat Slags need no introduction to the readers of “Viz”, but if you haven't heard of them, or read the comic, let me enlighten you. They are Sandra and Tracey, whom one can only describe as lardy, shagging, boozy, brain dead females who, after losing their jobs, head to London to basically do the aforementioned boozing and such to gain fame and fortune. On the day they arrive in London, Sean Cooley (Jerry O'Connell) gets struck on the head with a flower pot (seriously, I couldn't make this stuff up), rendering him temporarily insane. After seeing Tracey and Sandra on a TV Show, he falls in love with them and their attitude. In his quest to make them stars, he recruits Fidor Constantin (James Dreyfus) to focus his next collection on them. Somehow (only in the movies thankfully) the Fat Slags take the UK by storm, however jealousy drives a wedge between them (I'd guess the wedge would be a tree in fact) as they both vie for Cooley's attention. Once Cooley regains his sanity, he soon turns against them.

Some movies are great, some movies are bad and some movies are just plain awful. This has set a new benchmark. This is so bad that I wished blindness and deafness were thrust upon me. You can still see the scars on my wrists, this is without hesitation the worst movie I've ever had to endure and I've seen Catwoman and Batman & Robin. For a comedy, it's just plain unfunny, which is obviously a problem for starters. In terms of its humour, it's low brow, revolving around fart and belch jokes, fat gags, the incomprehensible Northern accent and seriously obvious punch lines. We expect better from the director, Ed Bye (Red Dwarf) because of his pedigree, but this material is weaker that a watered down shandy. It doesn't help that you throw as many “stars” to try and save this abomination, from Dolph Lundgren to Geri Halliwell (insert your own joke here), it is unbelievable anyone managed to get work after it, or maybe they just removed it from their CV. The only positive thing I can say is that it only lasts 73 minutes, but that's 72 minutes and 59 seconds way too long still. It has almost the feel of a Carry On movie, but without Kenneth Williams, the humour or the classic feel. How on earth this got the green light is beyond all comprehension. Like the Black Plague, avoid.