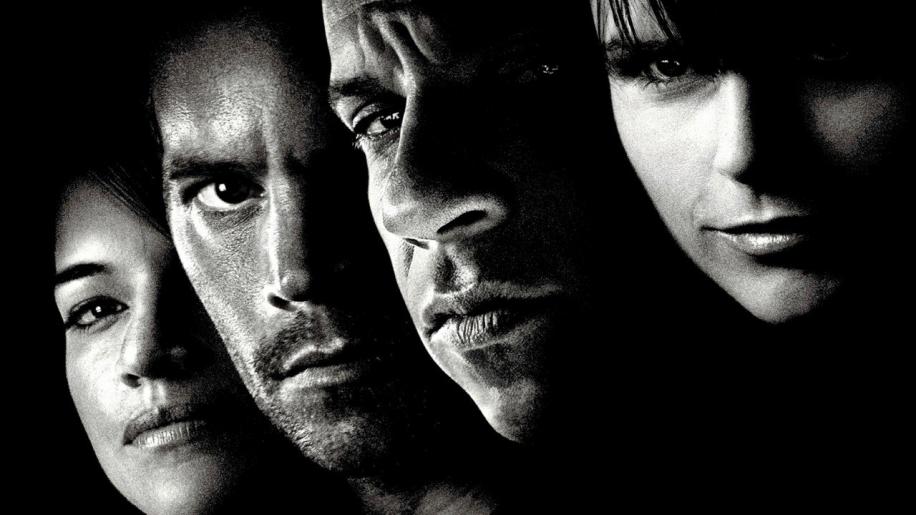 The Fast and The Furious came out in 2001, a bit of a sleeper hit, raking in a significant profit for its fairly reasonable budget and introducing a few new faces to the mainstream - the grizzly-voiced ex-bouncer Vin Diesel, the daft surfer-dude Paul Walker, the feisty latino Michelle Rodriguez and the young and striking Jordana Brewster. The movie was daft, a patent rip-off of Point Break - only with illegal street racing as the extreme sport - complete with undercover FBI Agent and complicated love interest involving the lead suspect. Point Break wasn't exactly moulded on its story, however much of a classic action-thriller it has become, but copying it - whilst no doubt profitable - also diluted it somewhat. And whilst Diesel made a decent enough anti-hero, neither he nor Walker were comparable substitutes for their counterparts from Point Break, Patrick Swayze and Keanu Reeves, respectively (and to say that Walker is not as good an actor as Reeves is quite revealing about just how bad he is). Still, the movie was successful enough to green-light a sequel, which saw the return of the lesser of the two central stars, Walker, who had an entirely forgettable second trip around the streets in sports modified cars and nearly destroyed the franchise.


One might say that this would have probably been for the best, but Director Justin Lin soon took up the mantle, and ported the street-racing story over to Toyko for a third movie which some regard as being the best of them all. Although it dropped all the familiar names from before, it did feature an epilogue cameo from the original star, Vin Diesel, prompting a fan interest in seeing whether he would return to the franchise for another run. In actual fact he wasn't the only one due to come back and so, eight years after the original, all four original stars reunited for Fast & Furious (note the barely significant rewording of the title), the fourth instalment in the popular street-racing saga.


Not a lot has changed over the last few years since LAPD Officer Brian O'Connor went undercover for the FBI to break up an organised crime ring that was hiding within the illegal street-racing underground, and ended up helping his arch-nemesis - the very person he was hunting - renowned racer Dominic Toretto, to escape custody. O'Connor is now back in LA working for the FBI to bust as drug dealer who is hiding his operation to run heroin across the border behind the cover of the street-racing circuit; whilst Toretto is still stealing things by day and racing cars by night, only now he is out in the Dominican Republic, trying to stay one step ahead of the authorities who have him on the Most Wanted list. But when a person close to both of them is murdered, they are forced to make an uneasy alliance to find the culprit. Getting themselves recruited into the drug-running operation, the pressure is on for O'Connor to get results and bring Toretto in once and for all; while all Toretto wants is pure revenge, and he will do whatever it takes to get it.


Kicking off with an outstanding opening blast, which first introduces Toretto's positively explosive petrol tanker-truck stealing antics out in the Dominican Republic via a tremendous pre-credits sequence, and then O'Connor's adrenaline-fuelled foot-chase across and off rooftops to apprehend a suspect soon after, Fast & Furious grabs your attention right from the outset, pounding at your senses with adrenaline-fuelled excitement. The loss of a key character motivates the lead duo, and the subsequent trouble they get themselves into allows for plenty of superb racing antics, from a Sat-Nav-led jaunt around the bustling LA streets - to prove their worth in the drug-running operation - to a ridiculously fast run through a secret cave tunnel to move the heroin. It all moves at a breakneck pace, seldom letting up to give you time to pick holes in the anorexic excuse for a plot, or criticise the fairly one-dimensional characters, and delivers enough high-speed action to keep fans of the franchise extremely happy.


If you were to take a look under the hood of this fast-mover, you would see that it was not really designed to stand up to close examination. The implausible set-up (why would they ever trust O'Connor to bring Toretto in after what happened last time?), the crow-barred-in twists (O'Connor's involvement with their dead friend is revealed far too late) and occasionally ludicrous set-pieces (how exactly do you drive through solid rock?), it all amounts to a pretty shallow speed racer. But, for a franchise that kicked off with a vapid, unabashed Point Break rip-off, this instalment is a marked improvement, and arguably the most entertaining entry.


Vin Diesel's return to all the franchises that made him famous (XXX: Return of Xander Cage and a new Riddick movie are supposed to be on their way) certainly proves the old, if it ain't broke, don't fix it adage, but it also shows that Diesel was just not able to get beyond those initial breakthrough roles. It is a shame because his early performances in both Boiler Room and the claustrophobic first Riddick instalment, Pitch Black, proved that he did have something interesting to offer audiences, and was more than just another dumb muscle-bound thug, whilst his subsequent film choices simply did not follow through on this promise. The second Riddick movie was mostly just a big, messy ego-trip, The Pacifier was a mere excuse to cash in on younger audience sales, and Babylon A.D. ended up being a botched sci-fi actioner which displayed not even a hint of the Fifth Element-style potential that it had on paper (although arguably, this last entry was not entirely Diesel's fault, but indeed the studios, who defiled Mathieu 'La Haine' Kassovitz's original vision).


I'm not surprised he's agreed to do further instalments for all these franchises, they are easily his biggest cash cows, and his every attempt to diversify appears to fall flat. Returning to the 'Furious movies gets him back in the limelight, but his character here seems a little less energetic than in the first instalment, where he at least had some presence and charisma. Here his journey of revenge offers up about as much visible emotion and 'acting' as you might expect from Steven Seagal. That said, it was undeniably nice to see him back, an extremely clever move from the Studios, and I hope he puts a little more effort into his next few productions (even if many are franchise instalments) and reminds us of the potential we saw back when he was working for next to nothing in Saving Private Ryan.


Paul Walker. Honestly, this Pinocchio of an actor makes Keanu Reeves look positively thespian. His perpetually constipated Orlando-Bloom-style trademark glare is simply too limited to allow him to really be taken seriously. Both of his first two 'Furious outings proved this, and his subsequent film career cemented the fact. Into the Blue? Well, all this showed was that he was as dumb a pretty-boy actor as Jessica Alba was a vapid hottie-girl actress - the front cover marking arguably the best aspect of this ludicrous music video of a movie. And his recent Life and Death of Bobby Z was a career-low, even for him, which truly is saying something. Coming back to the 'Furious franchise was really a very good move for him, and his reunion with Diesel actually works quite well: whilst either of them on their own may not have been successful for the series, the two together do remind you of the entertainment factor that was established some eight years ago. Dare I say it, Walker even has a few good moments in the movie, having aged a little bit and coming across marginally less like the dumb surfer-boy entity that he was always known for being.


This fourth instalment also sees the return of Michelle Rodriguez and Jordana Brewster, as Toretto's lover and sister, respectively. Whatever happened to Rodriguez's career? Her debut movie was the outstanding indie offering Girlfight, which instantly proved that this girl could act - as well as punch. Fairly high profile roles in the first 'Furious movie, Resident Evil and the slightly disappointing SWAT should have at least given this feisty chica more options, but aside from a season's worth of Lost, she has done nothing of any significance. Her extended cameo in this (and later in the likes of Avatar and Predators) only rubs salt in the wound, reminding you of the wasted talent in this girl. And Brewster? Well apart from her performances in the enjoyable and oft-overlooked Robert Rodriguez flick The Faculty, and the pointless prequel to the recent Texas Chainsaw remake, she has practically nothing significant to her name. Surely she was at least distinctive enough to get her career off the ground? Clearly not, and her return here as the love interest (after so many years, the chemistry still remains somewhat between her character and Walker's) is marginally pointless, but completes the welcome cast reunion, which does work well as a whole.


Rounding out the cast we few other vaguely memorable contributions from the likes of John Ortiz (who, to me, will never escape his purposefully irritating performance in Carlito's Way as the cousin), striking newcomer Gal Gadot (a slightly crowbarred-in vague love interest for Diesel's character) and cameo actor Jack Conley (Payback, Angel).


One might think the cars would be the true stars - it may have even been intended for it to be that way - but Diesel and Walker manage to keep their heads up for the most part, a few nonsensical PG-13 fight scenes notwithstanding (including a ludicrous moment where Walker takes a pounding only to barely register getting hit). The cars are great: Toretto still favouring muscle cars all the way, while O'Connor has his fun with modded imports. The chases are also quite ingenious (from the opening gambit to the Sat-Nav race) with the stunts varying from average to pretty special, that opening segment managing to retain a certain tension not seen since the dramatic truck-stealing sequences in the first outing.


Fast & Furious may be little more than a slightly older, grizzlier big brother to 2001's dumb Point Break rip-off, but it offers up quite a nice little reunion for all the original cast members, some good action, all strung together just about by a fairly standard but nonetheless enjoyable revenge plot. The script is basic, the acting still dubious (ironically it feels like Walker's got marginally better, whilst Diesel has dumbed his act down a lot) but it is no more or less than you would expect from a decent, stylish and well-produced fourth instalment in this franchise. And the overall product was far beyond my expectations, leaving me wondering whether a fifth entry - as Diesel is apparently keen to do - would be such a bad thing. Enjoyable, frivolous fun.