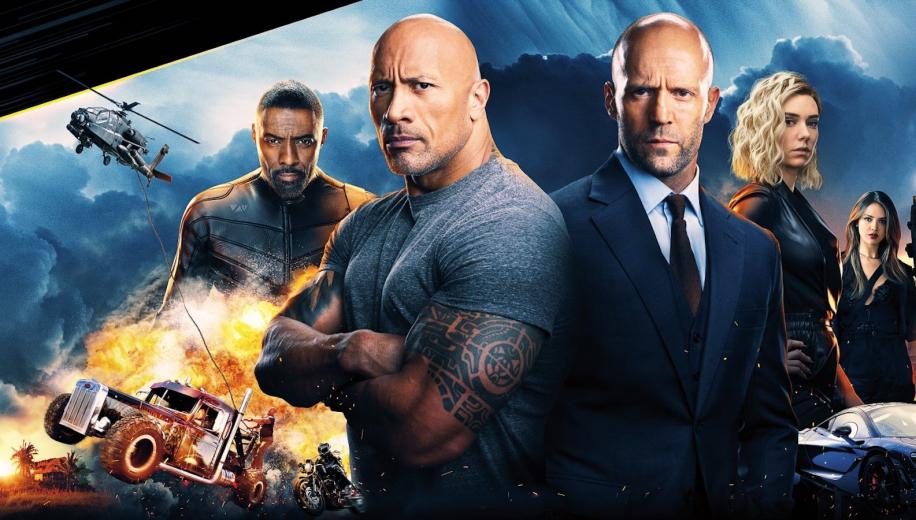 Doing what it says on the tin, few will be disappointed by 2019's answer to Tango & Cash, even if it is ludicrously overlong and arguably a few decades too late.

Eight movies into the Fast & Furious series and few will argue that the scenes with both Dwayne Johnson and Jason Statham were an absolute high point, particularly when they were butting their bald heads together in a gloriously over-the-top alpha male put-down match. Seeking to capitalise on this chemistry - or friction- Hobbs & Shaw is the first of several planned Fast & Furious spin-off projects, attempting to see how much mileage the franchise gets from features which don't involve the original stars, and it is certainly a lot of bang for your buck, taking a few minutes of witty skit between the two leads and seeking to transform it into an epic running gag.

Clocking in at a rather unforgiving 135 minutes, the epic action extravaganza often feels like it's fitting into a pre-ordained slot with a specific running time, content to throw in a half a dozen montages just to meet expectations; serve up multiple scenery-changes in a bid to live up to its globe-trotting big brother franchise, and hammer home the overarching themes of family and vehicular mayhem, even if it means adding a whole fourth act to the feature just because... who needs one forty minute long ending when you can have two?

For many, this is just what it says on the box - and then some - and the added bang for your buck is just an opportunity for further grin-inducing insanity, but Hobbs & Shaw has a remarkably laissez-faire attitude when it comes to almost anything but action, with even the jokes occasionally hit and miss, and things like efficient storytelling, characterisation and plot all utterly surplus to requirements. It also struggles to offer up any genuine tension; its indestructible leads charged with fighting a slightly more indestructible opponent whilst dealing with a human ticking time bomb threat that has been done better a dozen times before - even in Woo's Mission: Impossible II.


It's in-line with the franchise as a whole, selling spectacularly stupid as a grin-inducing positive, and almost getting away with it

It's a moot point though; this is Tango & Cash for the new generation, pushing the boundaries of 12A violence (but still unquestionably 12A, which is a shame given what the director has previously accomplished with a harder rating in John Wick, Atomic Blonde, and Deadpool 2 - the fighting, but for perhaps in the final, final conflict, seldom has genuine impact, and is blisteringly fast-cut) and going full 80s in its sensibilities, even - at its height - showing some self-awareness over the whole macho male setup, whilst it delivers a succession of increasingly preposterous, but still frequently entertaining action setpieces. And it comes up with the concept of cyber-genetic-enhancement, which earns it an extra point right off the bat.

Johnson and, perhaps in particular, Statham deserve this kind of epic Big Screen payday (apart from The Meg, Statham has never had it this big) and they make for a solid updating to the Sylvester Stallone/Kurt Russell union back in the 80s, even if the script here is hardly on fire, stretching their running animosity gag thin over the first two hours of the movie, and seeking far too much help from star cameos to keep the jokes flowing - including one who completely overshadows the leads. Idris Elba too tries his hardest to do something with his role even if - for good or bad - he's little more than the best Bond henchman not from a Bond film, whilst Vanessa Kirby expands her action repertoire post-Mission: Impossible - Fallout, and delivers a stunning audition for a potential upcoming Catwoman lead. She's certainly one to watch.

Few who love the Fast & Furious series will be able to resist the insanity of Hobbs & Shaw, both a no-brainer in terms of obvious spin-off after the last film, and also clearly a no-brainer in realisation. It's in-line with the franchise as a whole, selling spectacularly stupid as a grin-inducing positive, and almost getting away with it. Some judicious editing, and maybe a modicum of plausible peril (something, curiously, which the greater franchise whole seemed ever so slightly more capable of delivering - crazy as it may sound, this one may actually be missing the Diesel factor) would have pushed this higher up the ranks, but Statham and Johnson still clearly had a lot of fun flying around the world blowing stuff up, and that kind of thing is scarily contagious, when you're in the right mood for it.


Fast & Furious: Hobbs & Shaw makes its UK 4K Ultra HD Blu-ray debut in the wake of a preceding, likely identical, US release, turning around an upscaled 4K presentation ostensibly technically limited by a 2K Digital Intermediate but - in realisation - absolutely stunning with its Dolby Vision and HDR10+ accoutrements.


Absolutely stunning with its Dolby Vision and HDR10+ accoutrements

Digitally shot at higher resolutions, the 4K presentation still defies its upscale labelling and pulls a tangible amount of extra detail from the image, bringing that added bit of clarity and refinement to the presentation, over and above its SDR 1080p Blu-ray counterpart, resolving facial subtleties more impressively on close-ups, and lapping up the nuances in the various colourful (or not, when it comes to the UK) locations.

Of course it's the HDR and WCG that really make the difference here, with Dolby Vision (or HDR10+ if you are so equipped) being the cherry on top of a very vibrant presentation, rich with fiery, eye-searing explosive pops, bursting with yellows and oranges, and absolutely revelling in its jaw-dropping fourth act Samoan locations. Black levels are rich and deep but still promote wonderful shadow detail with no signs of crush, nor any other digital anomalies, and Hobbs and Shaw's 4K release ends up being a late entry for one of the best looking releases of the year.

The Dolby Atmos track is also absolutely stunning
Unsurprisingly, the accompanying High Definition 3D Object-based Immersive Audio Dolby Atmos track is also absolutely stunning - which is no real shock to those who have enjoyed the immersive audio mixes on previous entries in the larger franchise (c.f. The Fate of the Furious 4K). Dialogue remains firmly prioritised across the hectic proceedings - lapping up the frantic banter between the two leads, even in the most explosive circumstances - whilst the score keeps the momentum going, hardly distinguishing itself, but nevertheless suiting the action movie model, and giving the surrounds plenty of fuel to keep engaged throughout. Of course, it's the effects which define the track, bringing lifts crashing down, tearing through traffic at impossible speeds, or blowing up Samoa, with superb directionality, and all within the confines of your living room-turned-veritable war zone. There's more than enough LFE to give the track guts, and round out an excellent aural offering.

The 4K Blu-ray release of Fast & Furious: Hobbs & Shaw enjoys a pretty impressive extras package, headlined by an Audio Commentary from the Director which is supported by over a dozen mini-Featurettes which, despite only being 2-4 minutes in length each, still get the job done through sheer quantity, dipping into background for the characters, action sequences and cameos, with the package bolstered by a whopping 45 minutes of additional footage (which is somewhat surprising considering how long the movie already is - as if they shot two movies back-to-back and then cut an hour to make one long one). The Deleted, Extended and Alternate Scenes - including a complete Alternate Opening - afford a few nice additional touches, and round out a fairly comprehensive selection.

Few who love the Fast & Furious series will be able to resist the insanity of Hobbs & Shaw, both a no-brainer in terms of obvious spin-off after the last film, and also clearly a no-brainer in realisation
Does Hobbs & Shaw justify the bump to 2020 for Fast & Furious 9? The jury is still out. But if it gives Diesel's crew more time to fuel the rocket that will take their cars into space, then you can hardly complain. There's at least 85 minutes of high octane blistering action and snappy hilarity in this 135 minute movie so, if you've got time to kill, it's worth checking out, and Universal's stunning Dolby Vision and HDR10+ enhanced 4K Ultra HD Blu-ray provides tremendous video and Atmos-enhanced audio to make for a hell of a show.