Next stop: Moon Charger, or GT(F)O. 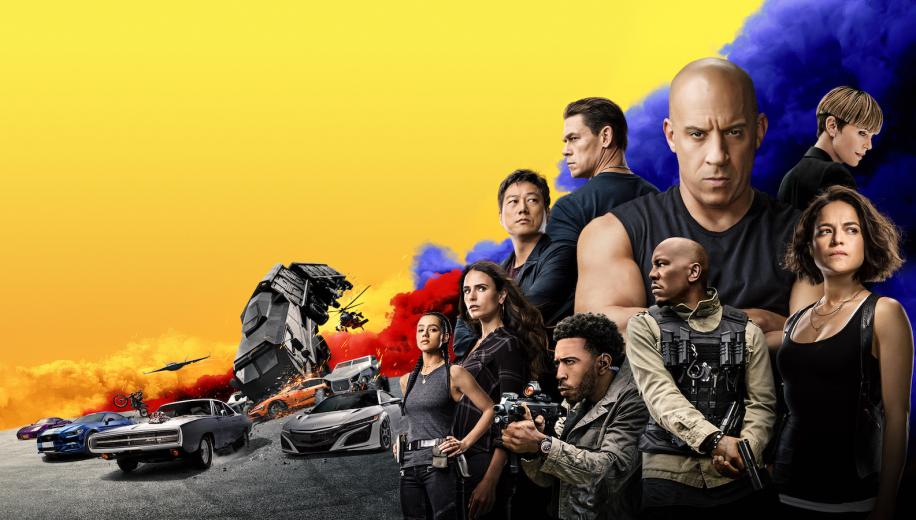 10 films into the larger franchise and this Fast Family Fast Saga thingy just won't die, but fans should still have a blast with the OTT insanity of it all.

Many regard Fast Five as being the pinnacle of the Fast and Furious movies - which it is - but it was also the point where the franchise pivoted completely from rebel robber racers to elite super spy chasers, with the subsequent journeys each increasingly fantastical pedal-to-the-metal rides into physics-smashing mayhem. As the characters themselves called it, this is not Mission: Impossible, it's "Mission Freaking Insanity" and, with that in mind, Fast 9 is a welcome addition to the fold and just about as good a ninth movie you could possibly expect from any saga, let alone one which started off about street racers in a low budget riff on Point Break.

Suffice to say, there are a couple of things which will likely ruin any watch of Fast 9. Firstly, if you haven't seen or enjoyed the preceding 8 movies (degrees of enjoyment are acceptable) then there is nothing here for you, the ongoing character arcs and revelations will do a Drax on you, and the craziness has hardly abated, so don't bother complaining they didn't magically get the formula right ninth time out, just walk away. Secondly, if you've seen the trailer then don't expect to watch a single setpiece and be surprised. The trailer IS the movie. That bit at the end of the review. Don't click it. It's the movie, and it spoils every bit of insanity you might get to explore. You can pretend it didn't or that you would have rolled your eyes anyway. But whatever WTF tricks F9 has up its sleeve are totally ruined by that trailer, as with all previous Fast trailers, only here dialled up to 11.

Still on board? Well Fast 9 is one of those movies - tangentially, not wholly unlike Bond's No Time to Die - which gets a LOT of things wrong in terms of story, characterisation and runtime, but still comes out on top in the escapist enjoyment realm, which is really where this franchise belongs. The stuff it gets right? Well, the stunts are still insane (and, you'd be surprised just how many are practical - from the circuit crash to the mines to even some of the magnet stuff) and this entry adds a very cleverly realised flashback character arc about a young Dom and his - previously never mentioned - younger brother, which, sure, only makes old Dom seem like a bit more of an idiot, but is still compelling retconning/fleshing-out, allowing new characters to be added, and more fun to be had. Cena, who normally has a blast not taking himself seriously (The Suicide Squad, even Bumblebee), has a real problem even walking normally, and seems utterly befuddled by any witty or cutting remark anybody else delivered, to the point where he comes across like an utter moron. But that's kinda ok, cause you know where this franchise is going in terms of his - and every - character, and Cena's plankedness does make Vin Diesel's superhuman Samson-like Dom fractionally less overtly dull (c.f. Fast 8).

Stringing together a bunch of internationally flavoured setpieces has become par for the course with this saga, but Fast 9 makes it an art form, barely letting up as it tears through minefields, over bridges, and across the clearly surprisingly mountainous landscape of Edinburgh for the Best Zipline Scene Evah and the most insane bit of eternal vehicle surfing since, well, the eternal runway (Fast 6). And who would have ever thought they'd have bested the last film's zombie cars with MAGNETS. Outstanding. It is supremely enjoyable at a very basic level, scoring points because whenever it's not intentionally entertaining, it's certainly unintentionally entertaining, a madcap combination of OTT crazy and so-bad-it's-great moments. More fun than the last outing, Fast 9 can't really be conventionally critiqued in any way, with a couple of closing past-characters-come-back scenes which, if capitalised on, may well leave this saga going out on an unexpected high with its two-parter finale.

Fast & Furious 9 - also known as F9: The Fast Saga - is the latest entry in the franchise to include an Extended Director's Cut which runs around 7 minutes' longer, adding a few unnecessary exchanges peppered across the already protracted 150 minute runtime, but also some extended stunts, including an insane sequence involving an upturned truck and an unfinished building (some of which was actually done practically, even if it looks a bit silly in finished form). It hardly improves the movie to any significantly noticeable degree, but fans will find it the preferred cut to watch at home.

Fast & Furious 9 will hardly surprise fans of the franchise who already have the 8-film Fast & Furious Collection in 4K, maintaining the kind of build quality you expect from the increasingly big budget country-hopping stunt-tastic effects-laden blockbusters, which comfortably defy that 2K Digital Intermediate to deliver excellent detail, textures, background nuances and clarity throughout, without any signs of softness or unnecessary digital tinkering. Of course, the Blu-ray already looks exceptional, so it's hard to see the 4K as head and shoulders above it, but this is a more refined picture, even if pixels alone aren't going to win this race.

HDR, WCG and Dolby Vision make the real difference, which absolutely no one will find surprising, bringing the neons of Tokyo to life, providing a more rounded tone to the sun-kissed, sepia-tinted flashbacks, providing vibrant green jungle canopies with blisteringly intense explosions to sear the screen, and delivering impeccable black levels. Sky's 4K digital version was already trounced by the 1080p Blu-ray, which is almost impossible to fault, but the physical 4K - with DV - just about has the edge.

... one of the best Atmos tracks of all time

The Fast & Furious 8-Film 4K Collection is arguably the best 4K set on the market for demo-ing soundtracks, and Fast 9 not only makes for a welcome addition to these top tier AV productions, but lands right towards the head of the pack, delivering a pretty-much non-stop aural assault defined by a thumping score, plenty of boisterous song tracks and some ear-splitting effects that are frequently sold on sonics alone. The stunts may be ludicrous but the soundtrack really goes the extra mile with them, from the steel cable twang during the bridge jump to the thrusters firing small bursts on the rocket-car, with LFE wallop booming with every mine detonation and tearing through your living room for the juggernaut-flipping finale. Drone missiles, cliff jumps, and high powered magnet-humming, it's all spectacularly rendered, and easily one of the best Atmos tracks in this entire Fast Saga, and thus arguably of all time.

Universal's 4K release of Fast & Furious 9 maintains the tradition of almost every one of the last 4 entries with an Extended Director's Cut in 4K (and, unlike the 8th entry, not just in digital form), but it also rather pleasantly crams all of the rest of the pretty comprehensive extras onto the 4K disc proper too.

The headliner - beyond the alternate cut - is a Feature Commentary with Producer/Writer/Director Justin Lin, but there's also a fun gag reel, a slew of mini-Featurettes taking an overview of the production, looking at the practical stunts (again, as covered-up as these are by effects, there's a surprising amount of practical work here), the locations and returning characters, and even a little focus on returning director Justin Lin and new boy John Cena's love for supercars.

A previously unmentioned brother, a character returning from the dead, a plot McGuffin involving hacking the world, a rocket-car, a minefield, and a whole lot of impossibly powerful magnets - Fast & Furious 9 is arguably everything and more that fans want from a ninth (or tenth, if you include the Hobbs & Shaw spin-off) entry in this kind of blockbuster franchise, setting the stage for likely a tremendous 2-part victory lap with the final two films. If you jumped off the train a while back, there's little reason to return, but long-time fans should lap this up.

... arguably everything and more that fans want from a ninth entry in this kind of blockbuster franchise

Universal's 4K Ultra HD Blu-ray release of Fast & Furious 9 is a fabulous addition to the 8-film Fast & Furious 4K collection, with superb 4K DV-enhanced video and a top tier Atmos track, as well as a surprisingly impressive selection of extras including an even longer Director's Cut. Fans will find it a must-have.

Fast & Furious 9 with the extended Director’s Cut is available to own on Digital now and 4K UHD, Blu-ray and DVD on 11th October.