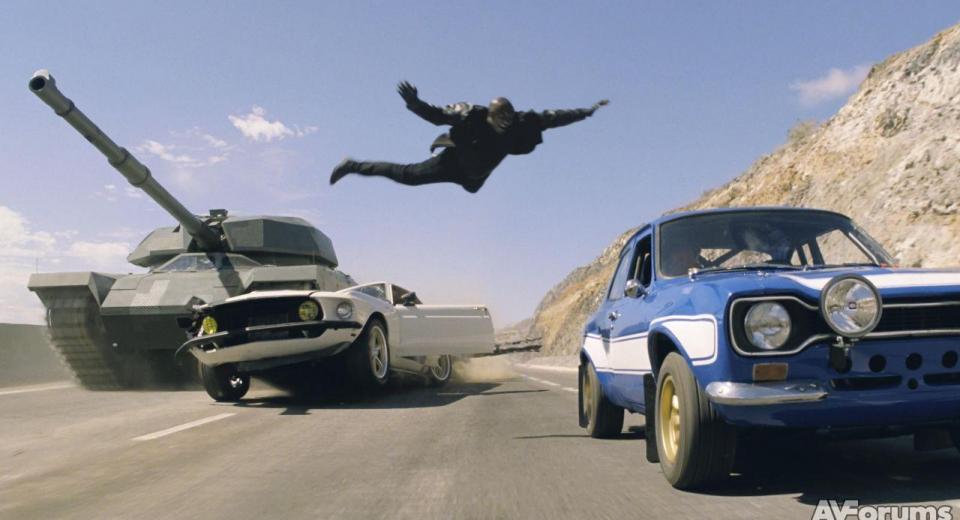 Another impressive entry in the series earns another near-perfect reference-quality video presentation, with this UK Region Free Blu-ray release – out several months before the US counterpart – boasting an excellent 1080p High Definition rendition in the movie’s original theatrical aspect ratio of 2.35:1 widescreen.

Detail is excellent throughout, whether it’s skin textures, clothing weave, fine object detail or wider background observation; all on offer with no sign of any excessive DNR application, overt edge enhancement or other digital defects or manipulation, and no softness whatsoever. The colour scheme is broad and strong, threatening to burn hot, but still delivering some fantastically vivid and vibrant tones

The cars themselves provide some of the brightest primaries, whilst ever single player sports a ‘healthy’ tan. Black levels are strong and deep and allow for solid night sequences and shadow detail, with no sign of crush. Overall it’s a hard-to-criticise, near-perfect video presentation that easily makes the demo grade. The accompanying audio track is expectedly bombastic; a thumping DTS-HD Master Audio 5.1 track that promotes the material very well indeed. Dialogue hits you front and centre, clearly and coherently, emanating from the frontal array and taking precedence wherever necessary, although this is – understandably – far from a dialogue-driven affair. Effects are largely loud and in-your-face, with everything from roaring engines to juggernaut tanks, squealing tyres to thundering transport aircraft hurtling down seemingly endless runways. Each specific car has its own distinctive sound, whether it’s Diesel’s guttural old school muscle cars of choice, or Walker’s racing imports, not to mention Dwayne Johnson’s booming military truck, all of them tapping into the LFE channel with wanton fury. And the buzzing ramp-car allows for not only a whizzing F1-style noise


but plenty of car-flipping and authentically painful crashes.

Explosions deafen, a variety of assault weapons will make you duck and cover in your own living room and the surround soundscape is wonderfully realised and perfectly configured for an immersive, furiously action-packed assault on your senses. Even the score knows when to hit; when to enhance the momentum and when to drive the climax home, mirroring the tremendous highs of the piece at all the perfect moments. It’s an impressive track, perhaps it won’t be renowned for its subtlety – and therefore doesn’t earn a perfect score – but it is demo-worthy nonetheless.

As with the previous release, Fast & Furious 6 goes above and beyond to provide a wealth of behind the scenes material, perhaps more than ever before – covering all the bases, from Commentary to Documentary, to multi-part Featurettes on the Stunts, Fights and Cars, and Deleted Scenes (not to mention the more violent extended cut). Great stuff!

Commentary
Feature Commentary with Director Justin Lin, only available on the Extended Cut, is a very interesting addition – right from the outset where he discusses the arguments they had over the title of the film (the cuts on this home release are called Furious 6, which was the title they always wanted – to match up with Fast Five – even though the marketing department pressed for Fast & Furious 6), to the character development and sum-up montage. He talks about the stunts shot, the ideas behind his ‘trilogy’ and how they always wanted to end with the plane sequence, as well as the characters they brought back in and the arcs told over the series. It’s a great shame Lin isn’t going to be a part of the seventh film, as it’s clear that his work on the franchise, over the best part of a decade, has been the determining factor in its success beyond all expectations.

Documentary
The Making of Fast & Furious 6 totals just under half an hour in length. It is a 4-part Documentary that is split into four distinct sub-sections – The Fastest of Them All, Reuniting the Team, Letty’s Return and The Mastermind and the Mole – which, in turn, explore the desire to best Fast Five, the returning characters, Letty’s re-appearance, and setting up a decent pair of adversaries for the team. There are plenty of interview snippets with the cast and crew members as well as a fair amount of behind the scenes, b-roll fight shots and green-screen footage, although there’s also a fair amount of final film footage back in there.

Featurettes
Take Control is a 20 minute Featurette that feels like it should have been a part of a PIP track (and is basically introduced as such) but works instead like a fast-running mini-video-Commentary which has the cast and crew charting the development of the series across the 6 films, from the characters (how Dwayne Johnson, a friend of Diesel’s got a role that was originally designed to be for a more Tommy Lee Jones type) to the cars; from the movie titles (including the fact that this was supposed to be Furious 6 to match Fast 5) to the chronology and placement of Tokyo Drift. It’s a very interesting offering, perhaps the most information-and-trivia-packed of all the extras, including the Commentary, and it is well worth checking out.

Planes, Tanks, and Automobiles is another 4-parter, spending 5-10 minutes with each of the key sequences – The London Chase, Highway Heist: The Convoy Attack, The Antonov Takedown and Dom and Letty Race Again – with each sub-section speaking for itself, dissecting the relevant sequence and showcasing plenty of behind the scenes footage of the stunts being prepped (using toy cars is a moment of genius) and then performed; mostly for real!

It’s All About the Cars is 3 parts – On the Set with Vin, Gearhead’s Delight and The Flip Car – which look behind the various vehicles chosen for this particular outing, the most interesting of which is, of course, the Flip Car that they specifically designed for the movie.
Hand to Hand Fury spends a final ten minutes looking at the key fight sequences, from the prison brawl to the girl-on-girl fight, the Joe Taslim fight (he was too fast for the camera) and the final fight combos. The choreography looks extensive, and it really pays off because the fights are largely very satisfying, far more so than on Expendables.

Deleted Scenes
Here we get a total of only 100 seconds of extra footage, with a little more set-up dialogue between Carano and Dwayne Johnson at the beginning, a smidge of further character development between Sung Kang and Gal Gadot and an absolutely pointless fraction-of-a-second addition with a prison guard. Not really worth bothering with.
Furious vehicular warfare. Pure escapist fun.

Blending just the right amount of thrilling action and practical stuntwork with competent – though admittedly fairly predictable – interweaving story arcs; featuring a huge ensemble action cast of returning characters and colourful additions who each get their moment to shine; and injecting the perfect dose of pure over-the-top frivolity into the mix, Furious 6 is by far the best entry in a franchise which, unfathomably, just keeps getting better.

Whilst newcomers, or those who jumped off well over a decade ago after the first film spawned an inexcusably poor first sequel, will struggle to catch-up – or fully enjoy – the full-circle story-arcs which work so well to deliver this satisfying sixth chapter, those who have enjoyed the last few entries will be rewarded for their faith and loyalty to the franchise. As pure escapist fun goes, it doesn’t get much better than this.

With excellent video, audio and extras, and released – inexplicably – months ahead of its US counterpart, fans should already have this on pre-order. New to the series? Or thrown by the fact that the first few were so flimsy? Well pick up a cheap 5-film box-set, catch up, and then marvel and this outstanding piece of escapist heaven. Recommended.