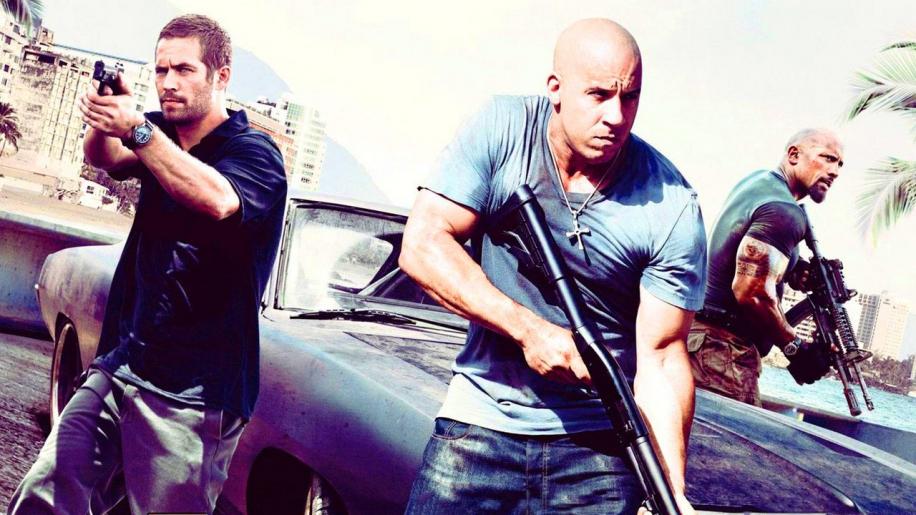 Well I never really expected to see another Fast and the Furious movie at the cinema. A decade ago I remember enjoying the first instalment at the flicks, a fairly modest budget Point Break-lite production which was both a sleeper hit and also a breakthrough vehicle for some of its relatively new talent. It was bristling with macho posturing, had plenty of frantic races, and made enough money to guarantee a sequel. Unfortunately, the second movie dropped the biggest, best star of the original – a young Vin Diesel fresh from his cracking debut Pitch Black – and headlined the lacklustre, wooden co-star Paul Walker instead. It was terrible. Still, the franchise somehow lived on, moving the setting to Tokyo for the third instalment and dropping all of the familiar faces. But it did feature a cameo from Vin Diesel, teasing fans with the promise that the man may return to the fold.

Two years ago it happened, with the fourth film in the franchise (the third chronologically, as Tokyo Drift is actually set after all of the rest of the movies) being released – simply titled Fast & Furious. It saw all of the key cast from the original hit return, not just Vin Diesel and Paul Walker, but also Michelle Rodriguez and Jordana Brewster. I still remember the great teaser trailer, which featured a frantic foot-chase across the rooftops and streets: it actually made me quite interested in returning to the series. And, sure enough, I really enjoyed it. Yes, it’s throwaway silliness masquerading under a pseudo-serious revenge plot, and peppered with increasingly ludicrous stunts, but it was a whole lot of fun. Clearly the biggest recent success in the careers of all those involved (okay, so Rodriguez had a supporting role in Avatar, but she’s done little else of note), it soon became apparent that this was not the end of the series, but actually a new beginning. A few Facebook and Twitter teaser posts later and fans found out that they were in store for not just this one new movie, but a whole new trilogy. Boasting almost all of the cast members from all of the previous movies, as well as the addition of Dwayne ‘The Rock’ Johnson, welcome to the second outing, Fast Five.

If you haven’t seen any of the Fast and the Furious films since the first one then it’s well worth checking out Fast & Furious. I know that plot may not seem all that important in these kinds of action-orientated outings, but kind of a lot happens in that last film, and – as stated – it’s the start of a new trilogy, so there’s plenty of overlapping story arcs. If you want a more comprehensive recap, read my review here, but basically Fast Five (also known as Fast & Furious 5 or Fast & Furious 5: Rio Heist outside of the US) picks up right where the last movie left off. Paul Walker’s former undercover FBI agent Brian O’Connor, now reunited with Jordana Brewster’s Mia Toretto, pull off an insane prison bus hijack in order to free Mia’s brother, Dominic Toretto (Vin Diesel). Fleeing to Rio, the three of them take a dangerous job to steal some high-end vehicles from... a train! After another ludicrous stunt it becomes clear that there is more going on than they first thought – the cars contained a chip which revealed the locations of where a Rio crime lord stashes all of his money. And, funnily enough, he wants his chip back. With a determined Diplomatic Security Service Agent Luke Hobbs (Dwayne Johnson) on their tale, and all of the corrupt cops in Rio out to get them, Dom and Brian have to put together a team in order to pull off one last heist and, hopefully, buy their freedom.

Kicking off with a double-dose opening salvo of totally over-the-top, utterly impossible stunt sequences, Fast Five certainly delivers in its promise to be bigger than anything before. I can only imagine how it would have all looked in IMAX (it’s the first of the series to be presented this way) but it certainly blows you away on the big screen. The craziness is contagious, the insanity may well be regularly unintentionally humorous, but that only adds to the enjoyment factor. It really is a blast. And, after a frenetic foot-chase across the Favela rooftops you think you’re in for a real treat with this latest entry. Then the script gets in the way and things start to go pear-shaped. I’m not sure who decided that this movie should be 130 minutes long, but it was a bad decision. All of the rest of the series fluctuate around the 107-minute mark, which is perfect for this kind of action-driven outing, but Fast Five pushes the boat out to well beyond the two-hour mark, and there’s just a whole chunk of wasted time in the middle.

From the point at which Dom assembles his new team everything starts to go wrong. Sure, it’s nice to see everybody return – Tyrese Gibson and rapper Ludacris (from 2 Fast 2 Furious), Sung Kang (from Fast & Furious and Tokyo Drift), the funny Latino duo and the gorgeous Gal Gadot (from Fast & Furious) and Matt Schulze (from the original The Fast and the Furious) – but what they get up to has no relevance to the plot here. They steal cars, and test drive them around a warehouse in a pointless montage which becomes yet more painful when you realise that it’s not going anywhere. The plan changes several times, and all of these scenes thus become redundant. There’s a good twenty minutes of nonsense in here which could easily have been trimmed to make a more enjoyable, streamlined actioner.

Things do, eventually, get back on track, with an expected mano-a-mano confrontation between Vin Diesel and The Rock which is like watching two Terminators battle it out in a confined space, and then an enjoyable ambush sequence which sees the team’s motivations change from money, to revenge. From there on out it’s all action, and we get a truly over-the-top climax which involves more cars getting destroyed than arguably all of the rest of the movies put together.

Acting? You came to the wrong place. Vin Diesel is still growlingly supercool, and I’m glad he’s returning to the trilogies that made him famous (a new XXX and a new Riddick movie are due next); Dwayne ‘The Rock’ Johnson, fresh from another similarly-themed actioner, Faster, sports what I can only describe as a redneck goatee, as well as an unconvincing Southern drawl (he also has some of the worst lines in the movie), but is still fun in the action department. Actually the person I was a little disappointed in was Paul Walker. He’s a poor man’s Keanu Reeves, with thoroughly wooden acting to boot, but he has grown into a more grizzled variation of his former self, and it worked well in most of Fast & Furious. Here he has let it slide again, and almost beats The Rock in the ‘painful lines’ ranks. I was also surprised by some of the dynamics of the romantic subplots – the leggy Gal Gadot from the last movie, who definitely had something chemistry with Vin Diesel’s Dom, returns here but doesn’t even touch on that spark. Instead we get an entirely new character with an entirely new background.

With a few too many cooks in the kitchen, Fast Five comes across like the Ocean’s Thirteen of the series. It’s enjoyable fun seeing everybody back together, and is far better than the lame second movie, but it still doesn’t quite fire on all cylinders, coming across as more of an ensemble-based, cash-orientated outing than a truly organic development of the saga. Some careful pruning could have tuned this baby to be running much more smoothly, and wouldn’t leave you physically and mentally numb by the two hour mark. Still, there’s an enjoyable action romp at the centre of it all, and it’s worth seeing just for the outrageous stunts and the brutal fight between two of Hollywood’s last remaining musclebound brawlers. Be prepared though, a few minutes into the end credits (after a Lord of the Rings-style drawn out series of epilogues) and you realise that we’re not done yet: these guys will return – along with even more characters from the previous movies. I’m still not sure it’ll draw me in to see it at an IMAX theatre – or any theatre for that matter – but it probably will, and it'll no doubt turn out to be another fun cinematic blast.

Anybody who has seen 2009's Fast & Furious should know exactly what to expect from this latest entry in the seemingly unstoppable franchise. I certainly enjoyed that movie, it was a strong contender for the best of the bunch, and this year's sequel, Fast Five, manages to deliver an enjoyable, flashy, often unintentionally funny, stunts-laden action-vehicle, whilst catering for a massive family reuinion of pretty-much all the actors ever involved in the series. Dwayne 'The Rock' Johnson makes a welcome entry as the new dumb muscle in town, chasing down the underground racers-turned-bank robbers around the streets of Rio as they take on a nasty crime lord and the corrupt cops on his payroll. Unfortunately, even for a brainless blockbuster, the plot is hampered by a highly unnecessary and immensely slow segment in the middle - which could have easily been left out - but it's still bolstered by some fun foot- and street-chases, a plethora of increasingly over-the-top stunts and a welcome showdown between Vin Diesel and The Rock; and the end result should leave most Fast & Furious fans satisfied.