"This just went from Mission: Impossible, to Mission-freakin'-Insanity." 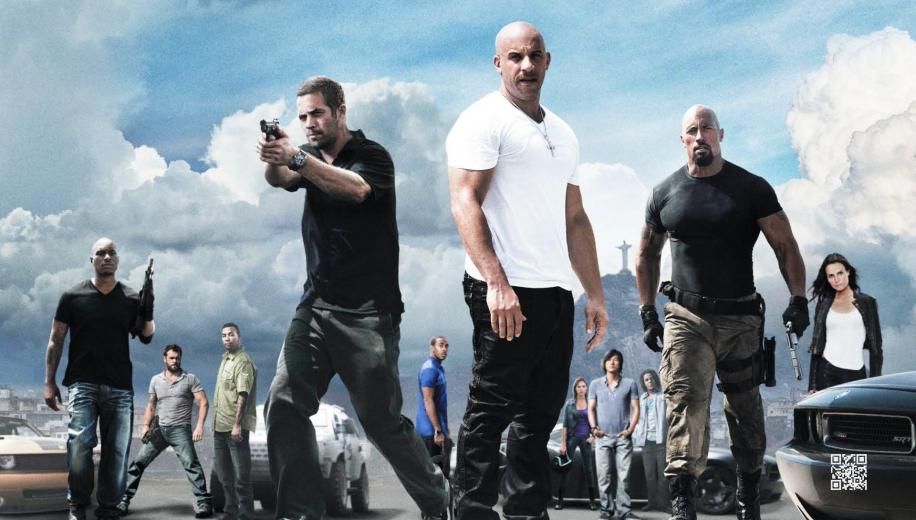 After the massive Box Office success of the fourth entry - which reunited series leads Vin Diesel and Paul Walker - a further entry was inevitable, with two actually envisaged, and Fast & Furious, Fast Five, and Fast & Furious 6 (originally more appropriately called just Furious 6) planned to come together as a prequel trilogy predating the events in Tokyo Drift, and bringing back the whole damn crew - and more!

With a considerably bigger budget to play with, and Justin Lin now very settled in the director's seat - and happy to ride with writer Chris Morgan's trilogy ideas to close out the four films that he would ultimately helm - this chapter ran with the welcome return of the leads and, now peripheral, characters and cast, united them as a family of sorts, and successfully transformed the street racing (and nascent heist) action of the first movie into more unequivocal team heist antics. It was like throwing The Fast and the Furious, Ocean's Eleven and Mission: Impossible into one big melting pot, and the results were - unbelievably - near-perfect, gelling into an epic action vehicle that provided defiant entertainment around every corner.


It was like throwing The Fast and the Furious, Ocean's Eleven and Mission: Impossible into one big melting pot, and the results were - unbelievably - near-perfect

The real magic ingredient added to the mix, however, is the introduction of Dwayne Johnson's Diplomatic Security Services Agent Luke Hobbs, a man-mountain with an inexplicable Southern drawl who drives a vehicle that appears to have similarly been chipped out of granite. Johnson may have since outgrown the franchise, and his clash of egos with series head honcho Diesel was always an Alpha Male explosion just waiting to happen, but the door swings both ways on this - he was undeniably a perfect addition to the franchise, which thus owes him for adding that spark, but the franchise also helped make him the star he is today; this was easily the biggest film he'd starred in until that point despite having spent a decade, post-wrestling, trying to crack Hollywood. It's a shame that their series' high one-on-one in this chapter didn't sort out any beef, as they have both proven integral to the success of the franchise.

Fast Five was the perfect mix of ingredients, and the perfect balance on the action/stunt front, where they had the budget and enthusiasm to do spectacular practical stunts enhanced by decent enough CG (the train sequence has got some true insanity to it), but where we were still a way off jumping the sub. The slightly darker, more serious feel established in the fourth film continues here, allowing for Rio-based action setpieces that have some genuine impact, delivering more body blows and firing more bullets than in the entire franchise thus far, and expanding out way beyond the simple racing themes previously allowed, giving us an exciting foot chase across the Rio rooftops, that superb clash between Diesel and Johnson (which is even more brutal in the extended cut); a brilliant street ambush (the series' answer to the memorable setpiece from Clear and Present Danger), and then an Ocean's/Mission: Impossible-twinged finale, which goes full tilt with its approach to literal safe-grabbing, but still pulls it off largely thanks to some series-topping stunts and some serious vehicular destruction.

Indeed, the series certainly has that Mission: Impossible vibe to it in terms of progression: after a successful first entry, and a cheesy sequel, the lacklustre Box Office response to the third film almost derailed the franchise, before a surprise fourth win allowed them to come back and go bigger than ever for the fifth film; pulling off some unexpected world-building in the process as the fifth (and in both franchises, the sixth films as well) brought back earlier characters and uncovered overreaching arcs, paying superb fan service to all that have gone along for this tremendous ride.

Fast Five comes to UK Ultra HD Blu-ray courtesy of Universal, who deliver an outstanding rendition of the 2011 fifth film which defies the ostensible limitations of its 2K DI.

Watching them in quick succession and it is amazing just how much they tailored the 4K colour grading for the original The Fast and the Furious to match up with the later chapters - this one in particular. Fast Five was, of course, always very hot, running with a saturated palette and unanimously tanned skin tones, and this is a faithful rendition of the same, giving the film - which always looked pretty impressive - a gorgeous upgrade in 4K. Detail does its best to draw out more than you get on just the upscaled Blu-ray, with HDR and WCG adding that extra bit of texture, and a wonderfully filmic sheen of grain which is almost unnoticeable, but still gives the film a wonderful texture.

Black levels are deep and inky, affording a near-perfect backdrop over which to play out the vibrant tones which don't just enjoy the popping car colours, but give added depth across the range. It's a contender for the most impressive presentation out of the first five movies - rivalled only by the first film's excellent native 4K presentation - and rounds out the new-to-4K entries nicely.

The accompanying DTS:X track is also a high point in the 4K releases for the set, providing some seriously reference high definition 3D immersive audio; no doubt assisted by the biggest budget thus far, and the most bullets fired, blows landed and explosions the franchise has ever seen.

Dialogue remains a firm priority across the duration, afforded clarity and coherence throughout, even when everything is exploding all around, whilst Brian Tyler (who's done every entry since Lin took over) delivers a strong score that knows just how to heighten the action sequences whilst also taking its time to add weight to some of the moments in between.

It's obvious that anybody would be really here for the effects, however, which take in the crash-tastic prologue, a stunning early train setpiece, a nice array of racing sequences, and that Rio rooftop chase, which boasts a serious amount of spent ammo. The Clear and Present Danger-esque ambush is an absolute high point, with grenades and RPGs devastating your living room, and bullets whizzing all around you on the soundscape, afforded visceral LFE impact, and the thunderous finale, with its safe-bashing demolition derby, is similarly heavily weighted, rounding out some real demo excellence.

Aside from the porting of the director's commentary, nothing else makes it over to the 4K disc itself

Aside from the now-compulsory porting of the director's commentary (the third in a row from Justin Lin), nothing else makes it over to the 4K Ultra HD disc itself, with the remaining holdover extras the same as on the previous release, and featured on the accompanying Blu-ray disc.

NB. The complete 4K Collection also comes with the same Blu-ray bonus disc that the 7-film Blu-ray collection sported a couple of years back. A surprise fourth win allowed them to go bigger than ever for the fifth, pulling off some unexpected world-building, and paying superb fan service to all that have gone along for this tremendous ride

Fast Five, arguably the best of all 8 of the films released thus far, makes a hell of a bow on 4K, with excellent video, an extended cut (in 4K), and a superior lossless DTS:X track (which actually bests the lossy tracks for the next two 4K entries), as well as all of the preceding extras.

If you're a dedicated fan of the franchise, you can probably consider adding a +1 to the score for all of these movies. This is a very inclusive universe, and outsiders may just shrug it off as little more than Bay's Transformers - only with cars - but blockbuster action movies (which are not part of the MCU) don't come much better than this, nor get any more rewarding for their fanbase, with the journey here not wholly different from the progression of the Mission: Impossible series, which similarly changed up its formula to become epic blockbuster entertainment, whilst tying in its core characters to the world-build and create a working family of sorts.

For those who wrote the series off after the first couple, there's no better time to give it another shot, but don't stop until you've finished Fast Five; if you're not sold by then, you never will, but if you jump off before getting to this peak fifth entry, you won't ever realise just how far this franchise has come.