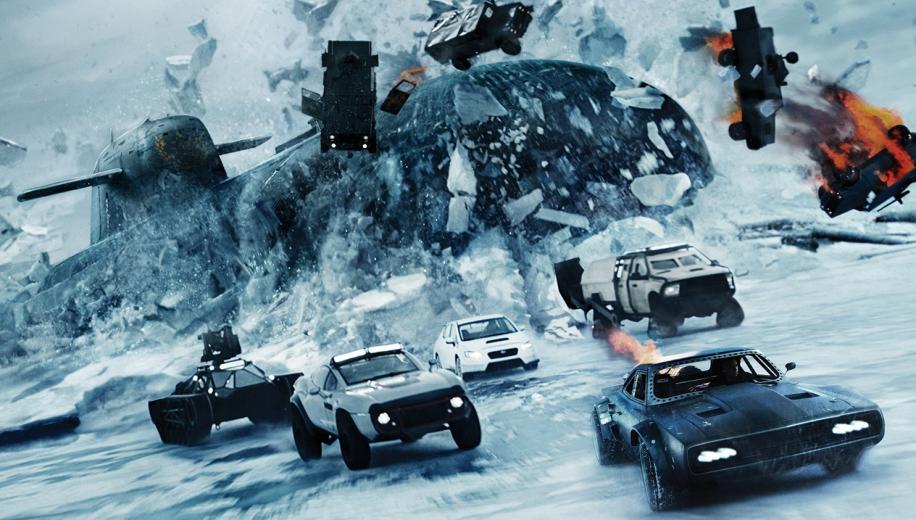 Although newcomers won't stand a chance, and although Fast & Furious 8 isn't the strongest entry, franchise fans are still going to have a blast with this nuclear sub chase action epic.

If you're going to see the eighth - yes EIGHTH - entry in this massive multi-billion dollar franchise, then you should know by now EXACTLY what to expect. Check your physics lessons at the door because, where we're going, a mile takes ten minutes to drive at 100 miles an hour; a car doing 200 miles an hour can board a plane and come to an instant stop; and a nuclear submarine can chase cars doing over 100 miles an hour despite probably maxing out at 20 knots.
It's all good though, nobody could make a better movie about car chases involving submarines. It defies logic, and that's what the franchise is all about now - defying logic, taking itself seriously, but sweeping you up in this mad insane-budget insane-stunt escapade so that, come the end of it, you feel satisfied in a way that itself defies logic. It's everything that the Transformers movies wish they could be; that every blockbuster action franchise wants to be.

The plot - based upon the off-screen faux feud between Vin Diesel and Dwayne Johnson - has Diesel's Toretto 'going rogue', and teaming up with Charlize Theron's supervillain who wants to be her own nuclear power. Whilst the team scratch their heads wondering what the hell is going on, Kurt Russell's Mr Nobody comes up with a plan to recruit the least likely player to help track Toretto down - Jason Statham's incarcerated Shaw brother.

Again, none of this really follows much logic, but it works within this wonderful Fast & Furious universe. The same universe where Letty came back from the dead, working for the villains, and turned out to have amnesia. The same universe where Dwayne Johnson's Special Agent Hobbs could be trading fists with Toretto in one scene, and best friends with him in the next. With those themes from prior movies in mind, everything makes total sense here. And fans who've followed it for the last seven films should have no problems with that whatsoever. In fact, it was arguably the next logical step to give the franchise - and Toretto himself - some direction after the tragic loss of Paul Walker's right hand man.

More than this, the narrative holds together enough to allow for 136 minutes packed with truly spectacular setpieces - right from the over-the-top street-racing throwback opening sequence to the zombie cars scene (think World War Z, with cars) - with any Toretto vs. the gang moments proving a whole lot of fun too. Sure, the film lacks the one-on-one Johnson vs. Statham, or Johnson vs. Diesel, or Diesel vs. Statham fight sequences that the last few instalments have made the most of, but it still provides each requisite player with more than enough kick-ass action to work with. Fans probably yearn for the highs of Fast Five, which really reset the playing field, or even the craziness of Fast & Furious 6, which brought Letty back into the fold, or Furious 7, which introduced the franchise's best villain with Statham, but Fast & Furious 8 (or The Fate of the Furious depending on which country you're in) still earns its place amongst them.

And the cast play it straight, despite clearly having a blast themselves, and it's that kind of self-aware but still committed performing that gives the fans what they want. Dom's gone rogue? Does that make any sense? No, but let's just go with it. The film has to tread so close to parody but never become it, and that's a tough ask given just how perpetually over-the-top this series is, but it somehow manages to pull it off.

It's also one of those rare franchises where they actually make the ever-burgeoning ensemble cast actually work. Diesel, is - oddly, given the quite personal narrative for him - somewhat lacking this time around (think back to when he first stepped out of his busted-up car at the end of the first movie, and he displayed more vulnerability and emotion in that one scene than in this entire movie) but the all-star cast more than fill the void, with Statham and Dwayne Johnson an absolute joy in every scene they have, and Theron proving a tough enough villain. And Diesel still delivers on the car-stunt-crazy-action front, headlining the piece and driving it home when it counts.

As stated, nobody could expect more from an eighth instalment in any franchise, action or otherwise, let alone one that was spawned from little more than a low budget rip-off of Point Break with cars, and then went downhill for the first two sequels. This is everything fans could have hoped for, and arguably more. It's gone so far over the top that it's redefined the term jumping the shark almost exactly forty years after it was first coined. The Fast & Furious franchise is the only franchise where jumping the shark is a badge of honour. And the rumours are not wrong about where they could possibly go next: the only thing left to conquer is space. Hopefully, with two more chapters still in the works, we'll eventually get there.