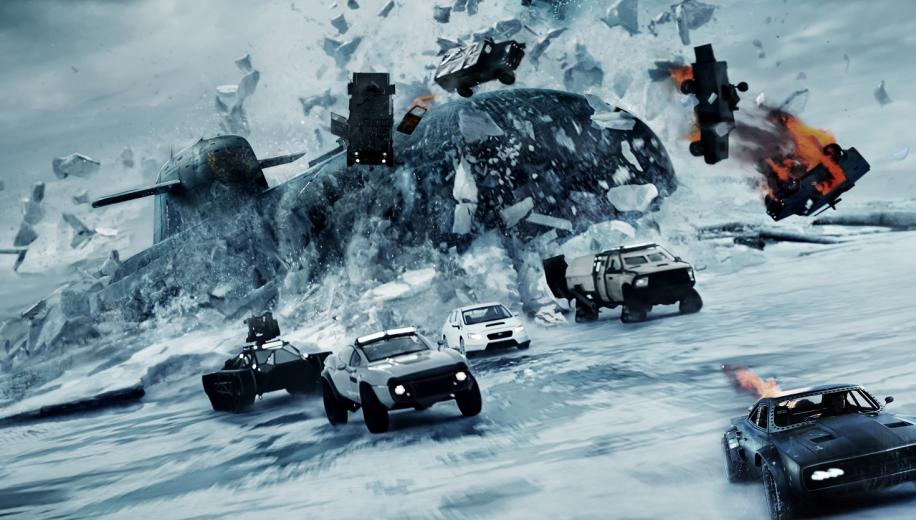 Although newcomers won't stand a chance, and although Fast & Furious 8 isn't the strongest entry, fans will have a blast with this nuclear sub chase action epic.

If you're going to see the eighth - yes EIGHTH - entry in this massive multi-billion dollar franchise, then you should know by now exactly what to expect. Check everything you knew about physics at the door because, where we're going, a mile takes ten minutes to drive at 100 miles an hour; a car doing 200 mph can board a plane and come to an instant stop; and a submarine can chase rocket-propelled cars despite maxing out at 20 knots. It's all good though, nobody could make a better movie about subs chasing cars. It defies logic, and that's what the franchise is all about now - taking itself seriously, but sweeping you up in this mad insane-budget, insane-stunt escapade so that, come the end of it, you feel satisfied in a way that itself defies logic. It's everything that the Transformers movies wish they could be and what every popcorn blockbuster action franchise wants to be.
With a narrative just strong enough to allow for 136 minutes packed with spectacular setpieces - right from the over-the-top street-racing throwback opening to the World War Z zombie cars - the twisted in-movie 'logic' allows for some fun rogue Toretto moments and some great Johnson and Statham banter (you can see why they are fast-tracking a spin-off movie). It's gone so far over the top that it's redefined the term jumping the shark almost exactly forty years after it was first coined. Indeed the Fast & Furious franchise is the only franchise where jumping the shark is a badge of honour. Fans may yearn for the highs of Fast Five, which reset the playing field, the craziness of Furious 6, which brought Letty back, or Fast & Furious 7, which was defined by its losses (Walker) and gains (Statham), but Fast & Furious 8 (aka Fate of the Furious) still earns its place in the franchise.

Universal finally deliver the UK Ultra HD Blu-ray release of Fast & Furious 8 more than three months after its US release and thankfully it looks great. Whilst it stems from a 2K Digital Intermediate which ultimately prevents us from fully appreciating the higher resolution digital film sources, it still makes for a nice 2160p presentation nonetheless, framed in the movie's original theatrical aspect ratio of 2.40:1 widescreen. The disc uses 10-bit video depth, a Wider Colour Gamut (WCG) and High Dynamic Range (HDR), as well as Dolby Vision, and is encoded using the HEVC (H.265) codec.

Despite the 2K Digital Intermediate putting a stranglehold on fully realising the potential of the source material, there is still a nice little uptick in detail here on this Ultra HD Blu-ray disc, especially when compared directly with its Blu-ray counterpart. Clarity is more refined, with stronger shadow detail, better skin textures, more nuanced clothing weaves and finer flourishes on the shiny cars. The difference is admittedly subtle, particularly in motion, but it is still there.

The colour scheme offers further distinction, bringing depth to the colour tones on offer and the wide colour gamut is richer and more refined, with a vibrancy that brings forth deeper tones than the Blu-ray is capable of. The shift can be disarming in some respects, because the Blu-ray presentation does make for a fun little colourful affair, whilst the Ultra HD Blu-ray, by comparison, is ostensibly more reserved, however the richer colours are ultimately more satisfying and when HDR implementation picks out the neon lights and specular highlights, it pops in a way the Blu-ray has no hope of achieving. Black levels are strong and deep, rounding out a very good presentation that doesn't quite make for as clear-cut an upgrade as fans would have hoped for - it almost comes down to taste - but it's a refined image nonetheless.

After reviewing a number of Dolby Vision releases we have come to expect an improvement in image quality when compared to the HDR10 version and so it proved with Fast & Furious 8. The improvements aren't huge and are sometimes quite subtle but there's no denying that the Dolby Vision version is the superior viewing experience. There is better definition to the specular highlights as sunlight glints off the highly polished cars in the opening Havana scene, whilst the colours pop with a more nuanced sense of realism. The night time sequences benefit from the use of dynamic metadata, ensuring that whilst highlights retain their impact, there is still detail in the shadows. The same is true of explosions which retain all their detail and appear to have more depth in their colours, whilst during the snow-set finale the tone mapping is precise and the highlights and detail in the snow are better defined. In fact its a gorgeous presentation with every drop of sweat on The Rock's forehead and every bit of stubble on Jason Statham's chin perfectly demonstrating the potential of Dolby Vision when compared to HDR10.


The DTS:X soundtrack certainly provides the fury into furious

Cas Harlow reviewed the audio using a standard 5.1-channel setup – Whilst dialogue remains firmly prioritised across the frontal array, rendered clearly and coherently throughout, and the thematic, now-familiar Fast & Furious franchise score does a capable job providing an engaging backdrop to the proceedings, it's the effects that truly dazzle. The guttural roar of the engines hits you right from the opening race, where they somehow manage to make the engines strain in new and impossible ways, and similarly redefine their corresponding sonic output. It's a throaty, LFE-tastic affair, and this pervades all the numerous car-dominated sequences, arguably over and above even the frequent thunder of gunfire and boom of explosions. Subtlety isn't the track's strong point, mainly because it's seldom called for, but in the few, infrequent, quieter moments - like aboard the plane - there's still a persistent hum from the surrounds, giving a constant, consistent atmosphere, within which to disseminate the more discrete, distinct components. Exceptional sound design and perfect fuel for the fire, leave this a demo and reference track through and through.

Steve Withers reviewed the audio using a 7.2.4-channel DTS:X setup – As you would expect from a Fast and Furious film the soundtrack is as souped-up and turbo-charged as the cars, with a DTS:X mix that delivers a highly immersive experience. From the opening street race in Havana the sound design is dialled up to eleven, with extensive use of the surrounds and precise positioning and steering of effects. The use of the LFE channel is particularly effective, not only in terms of the engine noises, gunfire and expositions but also in giving every punch that The Rock throws the impact of an earthquake. The overhead channels also get a thorough work-out, with cars literally raining from the sky in one sequence, and in the numerous scenes set on a plane in flight, the mix creates an immersive atmosphere and a nice sense of environment. The nuclear sub chase allows the sound designers to use their full box of tricks and is simply a masterclass in immersive audio mixing with surround and overhead effects and plenty of bass. However, within all this sonic chaos the dialogue remains clear and focused on the screen, despite Vin Diesel's constant mumbling and Charlize Theron's frequent whispering for dramatic effect. Overall this is a superb soundtrack that perfectly compliments the ridiculously over-the-top visuals and is reference all the way.

Perhaps the most frustrating part about this package is that the extended cut - a feature which has become a mainstay for every single Fast & Furious release since the fifth entry - is rather randomly restricted to a digital copy only. It's bad enough that the last two instalments recently re-released on Ultra HD - 6 and 7 - suffered with inexplicable soundtrack deficiencies on their extended cuts, rather than fix the problem, Universal appear to have elected instead to just jettison the extended cut almost entirely (here labelled 'director's cut' only to add salt to the wound, because if this is the cut the director wanted to see, then this is the best way to make sure than nobody does).


Annoyingly the extended cut is restricted to a digital copy only

In terms of the additional, 'hard copy' extras, there's a decent enough set, headlined by an Audio Commentary from Director F. Gary Gray (who previously worked with Diesel on the flawed A Man Apart years ago), with a strong, Featurette-driven selection of features which, whilst a little bitty, still colour in the background to this production, focusing on the cast and characters in the 4-part In the Family, looking at the unusual Cuban setting in The Cuban Spirit, looking at the vehicles in Car Culture, and the stunts in All About the Stunts, as well as offering up two brief but engaging Extended Fight Sequences (Statham vs. The Rock and Statham's excellent plane fight sequence).

Fast & Furious 8 stuns on Ultra HD Blu-ray with refined Dolby Vision-enhanced video and stunning, immersive DTS:X audio, as well as a strong salvo of extras let down only by the fact that access to the 13-minute longer extended 'Director's Cut' is restricted to digital download. Still, as an overall package, fans will find this a great release.