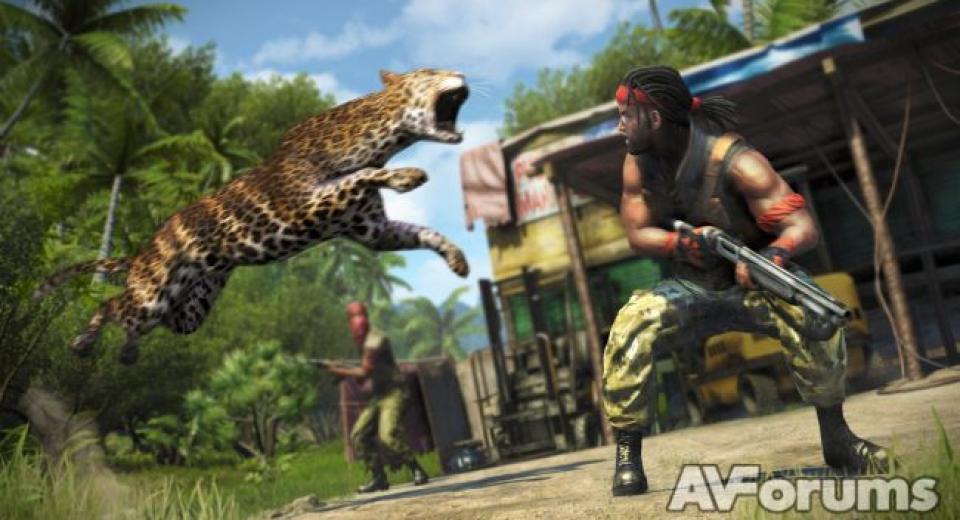 A quick update on the PC version of Far Cry 3, which is available now on Steam or through all the usual videogame outlets.

As my take on the PC version of Far Cry 3 broadly jives with Leon’s 360 writeup (which you can find here), I’ll not add too much to his text other than to say that Ubisoft Montreal should be commended for turning their maniacal island adventure into something that - at the very least - gets people talking.
Questions may well be raised surrounding the functionality and depth of Far Cry 3’s plot (and the critical and public interpretation thereof), but ultimately those bizarre narrative interludes failed to significantly impact the lasting impressions I took away from the game. Sure, Vaas was a brilliant character that I’d like to have seen more of, but it was the stalking, crafting, chain-assassinating, buggy-driving, C4-planting, hang-gliding carnage that kept me coming back to those beautifully-crafted islands, and there was more than enough variety and home-grown entertainment packed into its open-world charms to justify a 20-hour investment.
And as you might expect, the PC version is really the place to soak up the atmosphere. Playing on a modest i5 3570k and 660ti combination was an absolute joy, with the frame rate rarely dipping below 60fps at 1080p even with nearly every setting maxed out. Unsurprisingly, it looks absolutely staggering at full-whack, with the verdant jungle housing a beautiful day/night lighting cycle with a fantastic splash of colour around sunset or dawn. The excellent motion-captured character models and subtle post-processing effects make for in-engine cutscenes that blend naturally amongst all of that engineered beauty, and if you’re looking for something to show off the visual horsepower of the PC format as a whole, there are few better examples on the market at the moment than this. There is, of course, ample room for visual tinkering if your system is either exotic or undercooked, with the usual options for resolution, anti-aliasing (MSAA only), draw distance, geometry detail, post processing and texture quality flanked by the likes of full FOV controls, choices between SSAO and HDAO methods, DirectX renderer, shadow quality and more. The lack of AA options might disappoint some, but if you can afford the GPU headroom then Far Cry 3 is another game that benefits hugely from downsampling to remove those jaggies and improve overall visual quality. Even on the modest setup outlined at the start, I was able to get away with running a resolution of 2560x1440 (post processing set to medium and AA disabled, everything else cranked to maximum), chalking up a steady frame rate in the 40-60fps region.
And just to reiterate, if you can get away with it, there are few experiences on the PC (and therefore, any platform out there) that look as visually resplendent as a downsampled Far Cry 3, and it’s absolutely worth the time and investment to get it working if you’re in the mood to tinker.
On a technical level, other than the rather obnoxious uPlay front-end (which continues to be a pointless hassle), there are few other causes for complaint. Both mouse and 360 controller work without any tinkering, and you can handily swap between the two on the fly if you wish. Mouse acceleration and sensitivity can be tweaked to your desired level, and there are no problems with remapping the majority of keyboard controls. Crashes to desktop were rare (maybe two during the entire time, both of which happened when in downsampling resolutions, which may have been a factor), and micro-stuttering never reared its head on the Nvidia card that was used.

All in all then, there’s little (aside the aforementioned uPlay) to specifically dissuade PC owners from picking this up. Far Cry 3 is an absolutely beautiful game with solid open-world mechanics and a playful sense of hunting, exploration and crafting under its hood. Though the plot lurches from one point to the next without a clear ‘voice’ (and eventually fizzles out entirely), there’s more than enough enjoyment in the trappings of the jungle to lose yourself for hours at a time. That, alone, is worth the purchase, and the fact that it's a well-crafted PC port is an excellent bonus.