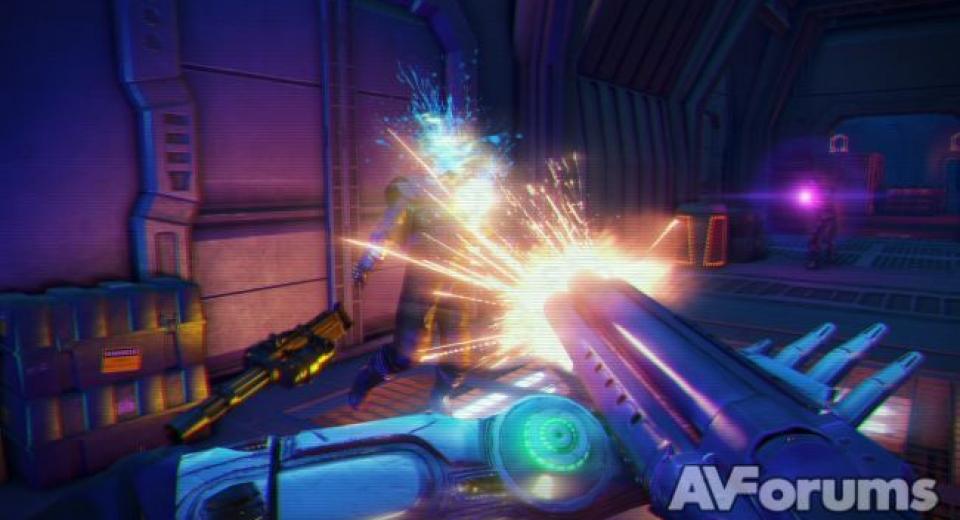 Far Cry 3: Blood Dragon is unashamedly, bombastically 80s. It's a relentless seven hour romp bookended by a laugh-aloud opening and an epic conclusion, and infused with the testosterone and humour that made action movies of the time so great.

Although Blood Dragon carries the name of Far Cry 3, there are no similarities other than the underlying game engine. There’s no need to have ever played, seen, or even heard of the Far Cry series before.

So if not an extension of Far Cry 3, what is Blood Dragon? It’s not quite an expansion but it’s not a full game in its own right. It feels like an AAA title, but it’s cut-price and there’s no retail version. I’m not sure there are many comparators - perhaps Portal at a push, but here the mechanics haven’t been overhauled to anywhere near that extent. You can see why the name ‘Far Cry’ was kept, but it’s less clear why the ‘3’ is in the title. Blood Dragon sets out its stall from minute one, kicking off with a nod to Predator's classic Long Tall Sally chopper scene, which Ubisoft have enhanced with lots and lots of shooting (interestingly, not dissimilar to the opening of Spec Ops: The Line). It's big, loud and can't fail to raise a smile -- much like Arnie and co back in the day.

From there you're thrown into a wonderful tutorial. The screen prompts: Press X to demonstrate you can read. “Man,” grunts protagonist Rex ‘Power’ Colt. “I hate tutorials. And this one is terrible!” Except it isn’t; all in all it’s one of the best openings to a game I’ve played in a good while.

Blood Dragon’s plot is... well... difficult to hold on to, and completely irrelevant. Much of the story is told through 16-bit style cutscenes so should in theory be easy to follow, but in truth it’s hard to focus on what’s going on when the narrative is so deliberately preposterous and there are so many distracting one-liners. Essentially, in an 80s vision of the future (where, magnificently, “the apocalypse has had an apocalypse”), Colt’s former cyber-commander has acquired some kind of bio-weapon-rocket-thing and must be stopped from firing it. There’s a love interest called Dr Darling (Blackadder, anyone?), and a load of crazy objectives including my favourite: ‘Punch the nuclear reactor’.

Where Blood Dragon falls down is in its presentation. Everything is viewed through a neon filter, which of course completely fits the 80s cyber-action vibe, but makes the game incredibly difficult to play. There were many driving sections where I found myself repeatedly crashing into trees I couldn’t see until it was too late. I didn’t find adjusting the settings helped either.

The audio goes some way towards compensating, however. Michael Biehn of Terminator and The Abyss does an impeccible job of voicing Colt, and the game's relentless but perfectly apt electronic synth music never wears thin. As I said, it’s not necessary to have played previous games in the series, but for those of you who have played Far Cry 3, the gameplay will be very familiar: predominantly shooting with (mostly) optional stealth elements. A new mechanic allows you to effectively chain stealth kills but I found it easier and more satisfying to go in all guns blazing in most cases.

The range of weapons are essentially the same (standard shooter fare), right down to Rex’s neon-lit bow. A key difference is that almost everything you spend hours unlocking in Far Cry 3 is available from the start in Blood Dragon.

As you’d expect, this kind of simplification of the source material is repeated throughout the game. Notably, the forking skill trees are dispensed with and replaced by a linear levelling/reward system, a change that I found to be a welcome improvement.

The titular Blood Dragons play a huge part in the game. These giant beasts will attack on sight and can decimate the enemy forces in no time flat. The idea is to lure one to the bad guys with Cyber Hearts, which can be harvested from the enemies you kill and thrown for the Blood Dragons to ‘fetch’.

The mechanic works well, although occasionally the dragons will ignore a Cyber Heart, and typically at the most inopportune moment - I had this problem repeatedly while trying to fight two Blood Dragons in one particularly fraught section of the game, and it was beyond frustrating. The main missions are supplemented by those familiar base-clearing missions, which unlock quick travel points and further side quests. The variety is fairly limited: there are quite a number of ‘kill the bad guys before they kill the hostages’ set-ups, and I found I lost interest in pursuing anything except the main quest by around the halfway point.

Ultimately, Blood Dragon is something of a one-trick pony, never fully escaping the trappings of being a reskin of a recent release. The missions become repetitive and the neon-soaked graphics are a pain to squint at, but at less than seven hours it’s never likely to outstay its welcome. Moreover, there are few games I can think of that have made me laugh quite so much, and for that alone Blood Dragon is probably worth the price. The first and last hours provided the most entertainment, but every line of dialogue or piece of text is worth your time.

Far Cry 3: Blood Dragon is a rare breed of game. Related only to its predecessor by a shared game engine, it's neither an expansion nor a full price release. It succeeds to the extent that it's clearly supposed to be a fun, over the top side-project, but the graphical overhaul makes it difficult to play and there's little in the mechanics that will capture the imagination. However, if you're a fan of cheesy action movies, you shouldn't let Blood Dragon pass you by.