The magic is running a bit thin with this one... 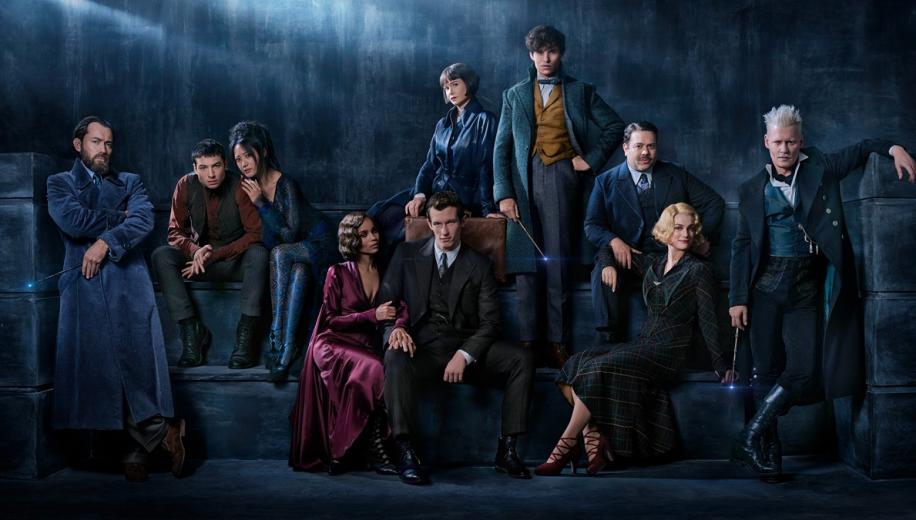 The Fantastic Beasts sequel goes big on its ensemble cast of characters but doesn't really go anywhere, losing some of its magic in its quest to turn this into a massive film franchise.

Rowling's 7-book Harry Potter series was famously founded on the fact that the author knew the ending right from the outset, mapping out years of school soap drama as the story built itself up to the grand confrontation that was telegraphed at the very outset. It could be argued that this more considered plotting worked well for the novels, even if it did not universally translate into compelling movies.

The Fantastic Beasts series was always intended to be more than just a one-shot prequel, but ultimately it's the Box Office that determines the future of these things, leaving it a less certain future until - of course - the first one proved that love for all things Harry Potter was far from dead. Its first sequel could have been the Empire Strikes Back of the series, going large in the consequences department, and putting the introduced characters on the back foot as they face a new threat.

However the notion of making a memorable trilogy has been sacrificed in favour of making a more protracted - but, equally, more financially lucrative - five-film series. Whatever Rowling has in store for this new series (acting as screenwriter now, without a pre-written book to base it off), we know for sure that we're not going to get to it for quite some time.

Crimes of Grindelwald gets off to a great start, with a lightning storm mid-air escape for Johnny Depp's Dark Wizard, who sets about hunting down Ezra Miller's Obscurial, Credence. Why? Because there's only one person who can stop Grindelwald, and that's his best friend at school, now headmaster at Hogwarts, Jude Law's Albus Dumbledore. And there's only one thing that can stop Dumbledore, and that's Credence.


Whatever Rowling has in store for this new series, we know for sure that we're not going to get to it for quite some time

Although the unnecessarily convoluted narrative structure of Grindelwald undermines even its core story, tying Dumbledore's hands with a further twist which appears purely designed to delay the inevitable confrontation which, at this rate, probably won't happen until the fifth movie. It also spends the majority of its bloated runtime trying its best to obfuscate that same basic narrative, as if simply throwing dozens and dozens of intricately detailed characters at the viewer equates to building a rich and compelling universe.

This might be more forgivable if it was the first film, but Crimes of Grindelwald has started the ball rolling with the main threat - unleashing Depp's antagonist on the world, and leaving the magical authorities desperate to stop him at any cost. Once you've pressed that button and started the countdown, having bumbling side-plots about escaped beasts and several romantic confusions thrown into the mix - and a protagonist who appears to forget his ultimate goal from scene to scene, whilst the antagonist(s) hang on a rooftop in Paris, waiting for him to find them - leaves this a very frustrating watch.

There is a good film in here, or at least a good first third of a film, which is what this two-and-a-half hour film could be boiled down too - keeping the opening threat-setting, and the fantastic closing confrontation, both of which would have made for a great first act to a sequel, but ditching the perpetual misdirection, and unabashed padding, along the way. Depp is actually on good form for the first time in what feels like decades, whilst Law struggles with an inconsistent accent but otherwise does well stepping into the shoes of such a beloved character. And the magic on show is through the roof, doing prequels in that Star Trek: Discovery style, where you wonder where all this sky-splitting magic was back (or forward) in the days of Harry. Ultimately, though, the fight isn't with Grindelwald; it's with the Studios who don't want to give us that bout quite yet. Not until we've spent a lot more money getting there.

Fantastic Beasts: The Crimes of Grindelwald comes to UK Ultra HD Blu-ray courtesy of Warner, who offer up what appears to be the exact same excellent 4K disc that their US release was afforded, with the digitally shot footage - captured at resolutions of up to 6.5K - given a full fat native 4K presentation here thanks to the full 4K Digital Intermediate that was used.

Technically, this is just about as good as it gets - higher than 4K capture, 4K pipeline, native 4K disc, HDR, WCG and Dolby Vision as the pearlescent cherry on top - and whilst that does not always translate to the picture perfection that it should clearly equate to, thankfully here it comes pretty damn close, rendering a demo and reference presentation that stands apart as one of the best in the entire franchise, sitting comfortably alongside (and perhaps even besting) the fantastic presentation that adorned the first chapter in this prequel series.

There's a noticeable uptick in detail here, with pin-sharp clarity and warm texturing, adding finely resolved detail to the weaves of clothing, and bringing close-ups and even mid-range shots to picture-perfect life. HDR, WCG and Dolby Vision really distinguish the piece, however, with black levels staggeringly different in terms of depth, affording far more impressive shadow detail to the 4K vision, whilst the magic powers showcased take the stage with their own eye-popping intensity. The early lightning storm is a marvel of flash contrast - searing whites against raging darker tones - whilst the finale runs a wondrous blend of screen-filling yellows and oranges clashing with intense blue-white flames, bursting to get out of your screen. It's absolutely demo quality in and of itself, rounding out an excellent video presentation.

The 4K disc's accompanying Dolby Atmos track (which, it should be noted, is also available on the standard Blu-ray discs, for both cuts), is an equally excellent affair, marrying up to the stunning visuals, with this bracing and engulfing, full High Definition 3D Object-based audio track conjuring up a storm to immersive you even within the confines of your living room.


The Atmos track is an equally excellent affair

Those familiar with this universe - as you should likely be given this is the tenth film - will know full well what to expect, with the magical realm rife with spell-casting and consequent ground-shaking, utilising the full expanse of the surrounds and letting the LFE channel weigh in on the mix, affording it a satisfying depth to the more exciting moments.

Dialogue remains well-prioritised, and crowd-based sequences and quorums come to live with a sense of 360-degree immersion, putting you right in the thick of things. The score maintains the Fantastic Beasts (and grander Harry Potter) signatures, affording the track yet more excellent material to handle, well, excellently. It's a great track.

Although the UK package appears to match up to the US 4K release, this time around we may have actually scored an extra point, with a third disc adorning the UK release, complete with an Extended Cut of the film. The Extended Cut is only a few minutes' longer, and hardly helps the already bloated narrative, but since the US package purportedly only allows viewers access to a digital download copy of this second cut, it's nice that they went the extra mile on this side of the pond. Oh, and it's even got an Atmos track too. Sure, in an ideal world they would have used seamless branching to stick this on the actual 4K disc itself, but we're still ahead in the game with this release.

The extra features themselves are relegated to the accompanying Blu-ray, and include a trio of reasonably substantial Interview-based Featurettes, primarily looking behind Rowlings' world, with the second featuring a couple of the cast members waxing lyrical about their involvement in the universe, and the third focusing on the return of fan-favourite character Dumbledore. A further segment, running at a hefty near-hour in length, offers a breakdown of six key effects sequences, and we get a quarter of an hour of Deleted Scenes to round out the disc, and complete an impressive package.

Fantastic Beast: The Crimes of Grindelwald had the potential to be pretty special, hitting the ground running with a clearly defined threat on the loose, but then not only dropping the ball, but actually just going and getting a cup of tea whilst we wait for the protagonist(s) to finally confront the antagonist(s).

It's poor plotting, robbing tension with every one of the myriad side-plots that help fill its over-indulgent runtime, and it's ultimately more interested in setting up the potentially taut and memorable trilogy as a much more financially lucrative 5-film package instead.

The UK 4K Ultra HD Blu-ray release appears to be even better than its US counterpart, boasting the same spectacular Dolby Vision-enhanced full-fat 4K visuals and the same outstanding Dolby Atmos track, as well as the same healthy selection of extra features on the accompanying Blu-ray, and also including the Extended Cut, but - instead of just giving you a Digital Code (as the 2-disc US release provides) for this slightly longer cut, we actually get a third Blu-ray disc, with an Atmos track on that one too. Fans - and completists - will certainly want to pick this package up although given how we haven't really made it much further into the plot with this second chapter, it might be prudent to consider waiting until all five movies are done with to see if it actually goes anywhere special.