It's not ideal that you have to warn people to stick around past the halfway mark to see a very different tale evolve, but that's what you have to do. 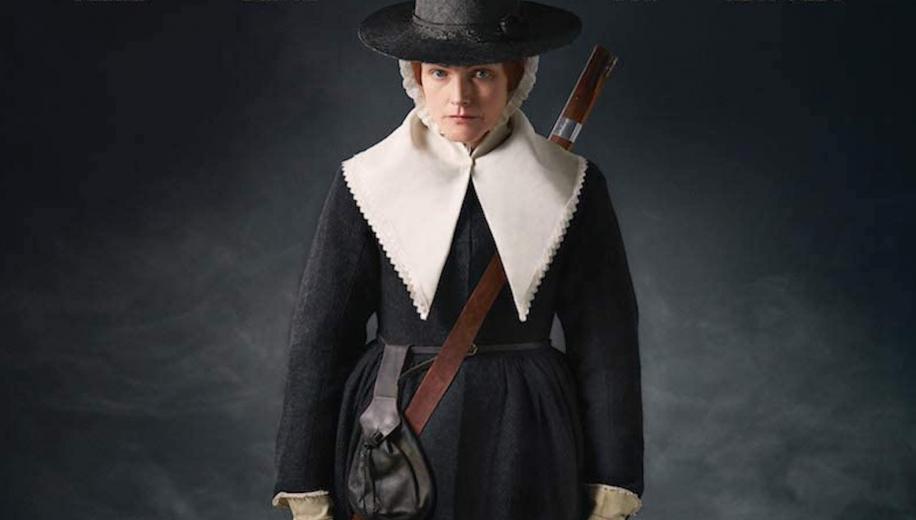 Clay's been in the business for some twenty years now, churning out little-known features several years apart, with his last production way back in 2008. The messy production history of Fanny Lye - also known simply as, The Delivered - probably won't help his cause, with the shoot concluding back in 2016, but the festival premieres in 2019 and general release in Summer 2020 which was hardly a great time for cinema releases, big or small. This was clearly Clay's baby though, through and through, and he'd been reportedly working on it for decades, pouring his soul into every shot, every frame. And it shows, even if the film - particularly in its 20-minute longer Extended Cut - is a frequently indulgent affair, testing your patience and tolerance in spite of its adept crafting of a palpably tense atmosphere.

The period western tale, which has been repurposed for modern sensibilities as one of the first examples of feminist independence, is - in a very roundabout way - about Maxine Peake's Fanny, a supposedly content and certainly loyal former servant-girl-turned-wife-and-mother, who raises a young son with her God-fearing former soldier husband, John (Charles Dance). When a pair of naked strangers appear on their property, they bring with them trouble, and a rude awakening for Fanny who, it seems, has been sleepwalking through her life.

Clay did everything for this movie. Indeed it's surprising not to see him with a cinematography credit too, as it looks stunning, with a hefty chunk of the runtime dedicated to slow panning shots and crane shots that take you across the landscape (the extended cut is as fond of these shots as Zack Snyder is of slo-mo in his cut of the Justice League). It's commendable, and impressive, but the pacing is way off, never quite attaining the heightened atmosphere it is clearly shooting for, and more often falling back on that accursed word: indulgent.

Maxine Peake is solid in the ostensible lead but, again, comes a little unstuck due to pacing, playing what feels like one character for the first half of the movie, and another for the second, with Clay avoiding pulling at the thread too early which, in turn, leaves the audience feeling like the rug's been taken out from under them. Charles Dance is unsurprisingly excellent, whilst Freddie Fox and Tanya Reynolds do well as the surprise guests, and the tension in the latter half is very good indeed, trading in themes of home invasion but subverting expectations at every stage. It's hard to deride such a valiant and passionately personal effort, which does have some tricks up its sleeve, but you need patience and a measure of forgiveness over the inherent flaws to make it to the end of this distinctly acquired-taste feature.

Fanny Lye Deliver'd comes to UK 4K courtesy of Pull Back Camera, as their first - well, their only, thus far - exclusive, and wielding a pretty hefty price tag commensurate perhaps to such a position. This Ultra HD Blu-ray release boasts a frequently surprisingly excellent native 4K presentation considering this is hardly a top tier title, enjoying the gorgeous scenery and impressive cinematography, and crowning it all with Dolby Vision to boot.

This is certainly a gorgeously-shot feature, enjoying the broad framing, the panning shots and the lavish reconstruction of the set (which certainly looks the part). Rich in detail, and stylistic texture, Fanny Lye clearly enjoys its native 4K presentation - available for the Extended Cut only, with the Theatrical Cut gifted a 1080p rendition on the second Blu-ray Disc. It's not perfect, a few shots lose focus, and feel a smidge softer, but that's more the source than the presentation, which is proven across the majority of the runtime where it looks thoroughly organic, boundlessly textured and largely excellent.

WCG, HDR and Dolby Vision bring further depth to the tones and hold things together during the inky night time sequences - which really push the capabilities of the enhanced presentation tools - even if there's little in the way of overt pop across the feature. It was a murky period in time and, aside from the occasional blue sky, there's nothing here to break that dirty, hazy atmosphere. Overall it's a very nice presentation indeed, for a great looking film.

Dialogue gets firm prioritisation throughout, clearly the most important element, with scoring frequently absent for long stretches whilst the characters have a battle of wits. Effects are nominal, drawing on the period environment, but thundering with LFE - rather aptly - during the thunderstorm, with some degree of mood and atmosphere brought across the surrounds. The score is perfectly set for the piece, but also cleverly utilised only where necessary, as it could otherwise shift the tone into potential whimsy. Overall, it's a very good track.
﻿

Pull Back Camera Limited (presumably Clay's own production company, since only his films are in its roster) release this pricey 2-disc limited edition set in style, giving the title better treatment than a considerable number of mainstream releases get these days, not least in the provision of the both the Extended Cut and the Theatrical Cut.

The 4K disc boasts the Extended Cut and a Director's Commentary too, whilst the Theatrical Cut is on the second disc, a Blu-ray, along with all the other extras - a 'virtual' Q&A with the cast and crew, a gallery, Trailer, and a Booklet including essays on the film,

Fanny Lye Deliver'd has been years in the making, and writer/director Thomas Clay deserves credit for putting together such a personal and ambitious project, despite its inherent flaws and any problems with its runtime (which are certainly alleviated in the Theatrical Cut). It is indulgent, but it does mostly reward your patience.

Pull Back Camera's UK 2-disc Limited Edition 4K release boasts a stunning native 4K Dolby Vision-enhanced presentation, both cuts of the movie, and a whole host of extra features, in a superb package that should leave fans positively salivating, even if the vast majority are probably still wondering how the hell this ended up getting a 4K release at all.