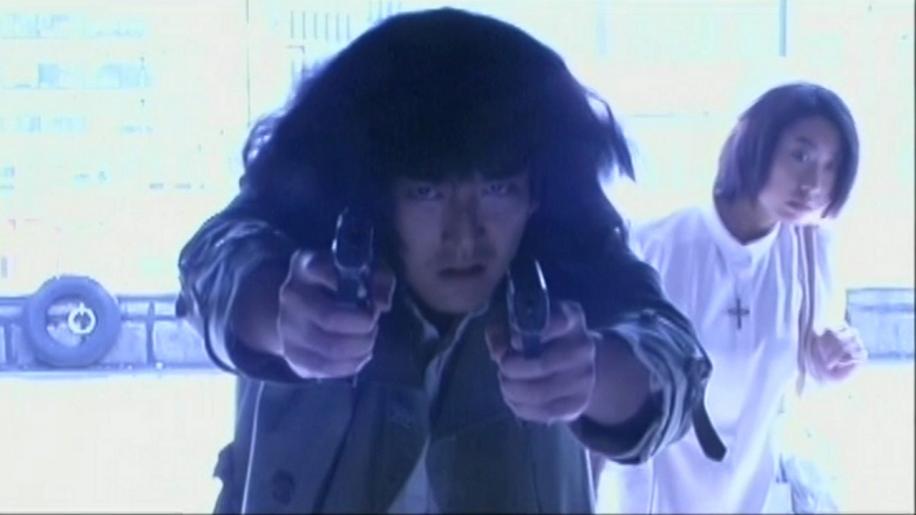 The first instalment of Family takes no time at all in introducing us to the kind of movie we can expect to see and believe me, it's not very nice, not very nice at all. Directed by Takashi Miike, renowned for his violent and almost pornographic work which includes the Dead or Alive movies, MPD Psycho and Full Metal Yakuza, Family again deals with the subject of the Yakuza (the Japanese equivalent of the Mafia) and how they operate as a close 'family'. More specifically, it deals with the revenge of one man whose father is brutally murdered and mother viciously raped by fellow members of the same 'family'. It also touches upon the relationship this man has with a nurse who witnesses one of his assassinations and with whom he falls in love with. This relationship is dealt with far too superficially and again reduces it to one of lust and violent sex.

Based upon the Manga comics written by Hisao Maki who incidentally also wrote the screenplay for this movie, Family uses some very unusual filming techniques. Blending extremely bleached, washed out scenes with intentionally grainy ones and using unusual camera angles, the movie does indeed resemble a comic at times, but certainly not one you'd show your children! The problem I have with this movie is the total disregard it has for women. They are routinely beaten, raped, violated and abused to the point that it just seems totally unnecessary and nauseatingly unpleasant. Now I understand that this is to highlight the viciousness and brutality of these Yakuza members, but with the exception of maybe three actors, the performances are so amateur that you cannot conjure up any sense of fear of these people, only the aforementioned repulsive treatment of women.

The violence is fairly brutal, but not as graphic as some of Miike's previous work and overall you are left feeling disturbed at the images before you, yet nonplussed by the story itself. The acting unfortunately cannot carry the weight of the subject matter and this alone reduces Family to a low budget gross-out movie instead of a dark, violent classic such as The Godfather. I reluctantly moved on to Family 2.

Starting off for the first ten minutes showing exactly the same last ten minutes of part 1, I suddenly realised I was in for more of the same. Showing again a group of thugs raping a beaten girl with images so graphic that they have to blur a man's genitals as he masturbates I just wanted to stop right there and write that part 2 was no better but I persevered to see if this part at least tried to add some balance. Thankfully I can say that it does. This part tries to not only explore more emotionally complex relationships, relationships that are built on affection and not only brutal lust, but also features a female character who is not only a dominant force in the movie, but between herself and another woman clad in leather and carrying a whip, beat ten tons of crap out of some poor guy. Like I said, BALANCE!

The movie obviously has a much bigger budget than the first and along with that bigger budget, has considerably more action. Boat chases, helicopter gun battles, fast cars and John Woo style gun fights. Miike obviously took notice of the criticism that must have come his way after the first movie and this one, although flawed, has much more to recommend it over the first. The only problem is that you really need to watch the first to have any idea what's going on in the second.

Both movies play with a hard thrash metal soundtrack scored by band Monkey Pirates and this can become quite intrusive if heavy music is not your thing, but then again, I'm sure if you are into classical then this movie is probably not your thing either! The first movie tries to be a dark, violent compelling look at the Japanese underworld and fails miserably. The second realises its failure and strives for little more than to be an action movie. It very nearly succeeds had it not been for the first scene which again puts you in a very negative frame of mind and affects your enjoyment of the rest of the film.