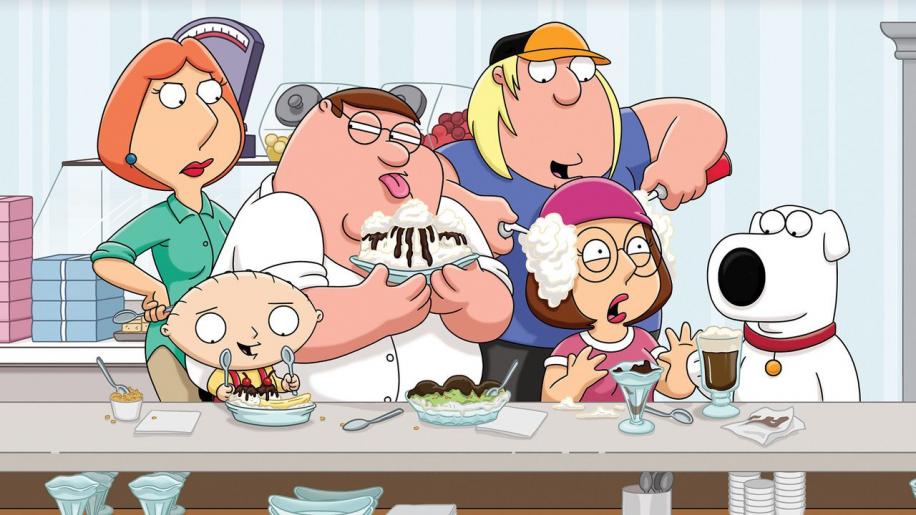 Well, the show sure is colourful. The full spectrum is employed with marvellously bright and pleasant results. The colours are rock solid and vibrant, with no hint whatsoever of bleeding, smearing or over-saturation. Blacks are strong and reliable and the image retains a crisp clarity that, only occasionally, reveals any slight tracing with the animation. The 1.33:1 image is faithful to the original broadcasts and I experienced no major problems with compression, dot crawl or motion drag. Some of the edges are a bit jagged, which is more readily apparent on much larger screens, but overall, I was very happy with the disc's visual reproduction of the show. Family Guy has got a full-blown Dolby Digital 5.1 makeover that does possess some fine examples of steerage around the speakers. The effects aren't employed that often but they are quite nicely integrated into the sound design. The songs and the score sound suitably robust with dialogue never drowned out and this widening-up of things makes for a much fuller and more dynamic experience. It's not in the same league at all as a movie with full surround, but this is a welcome addition to the package, enabling Family Guy to become that bit more immersive. Good attempt. Well, this is quite a well-stocked package, folks. Out of the thirteen episodes presented in this volume, ten of them have Commentary Tracks. Whilst show's creator, Seth MacFarlane participates in all of them, we also get turns from the writers, directors and cast members, too. All are very funny indeed and we often get to hear about the bits that we weren't meant to see but ended up on the DVD anyway. Everybody has a great time and there is hardly any second when they are not spinning risqué anecdotes and taking the proverbial out of the show and one another. But the best of the bunch has to be the one in which James Woods joins in over the top of his big episode. Now, he does exceptionally well amidst this crowd. Very quick and very funny, he literally takes over the proceedings and runs away with it with real comic talent and zest. It's also nice to hear a little mention of his turn in the film Cat's Eye and the unfortunate snagging of the Oscar that should have been his for Salvador by Paul Newman for The Colour Of Money. Very entertaining chat-tracks all round.

Next up is World Domination: The Family Guy Phenomenon (24.09 mins). Here we have participation from all the main movers and shakers as we sit in on read-throughs and have numerous talking heads, clips and a justifiably proud all-round celebration of how the show beat the system and came back from Network TV's grave. We meet Seth MacFarlane, thanking the fans for giving the show its second chance, writers Danny Smith, Chris Sheridan and Steve Callaghan and get to put some faces to the voices with Alex Borstein (Lois), Mila Kumis (Meg) - who looks like she's borrowed the lips and eyes of Angelina Jolie - Seth Green (Chris), Patrick Warburton (Joe Swanson) and Mike Henry (Cleveland). We do get the usual “Wow, we had such a great time doing this,” type of thing, but with the Family Guy crowd it just has to be true. Check out the read-throughs for proof of the sheer fun this lot is having. They also reveal that this season was made especially with DVD in mind - a keen eye for placing in as many gags as possible, because of the ease of playback meaning that nothing would be missed. Good featurette, albeit brief.

Then we get Deleted Scene Animatics (2.19 mins). This features a large Brian song and dance montage set to the tune of Mr. Sandman, but obviously re-worded, which is actually an extension of the “Captain, my Captain” sequence. This flits between full screen animation and split-screen cartoon and animatics.

Score! - The Music of Family Guy (7.55 mins) features Seth MacFarlane, sound engineer Armin Steiner and show composers Walter Murphy and Ron Jones. This is a welcome little featurette in that it acknowledges the musical element that plays such a huge part in the success of the show. It is a rarity to have a full orchestral backing to a TV sitcom alone, rarer still that it should be afforded a cartoon sitcom. Again, the feeling that the show has gained confidence comes shining through, revealed in the greater musical range exhibited throughout the series. The fantastic Aha “Take On Me” sequence and the other parodies are mentioned though, sadly, this is just a whistle-stop tour. Still pretty cool, though.

Next we get the Multi-Angle Table Reads for the episodes North By North Quahog (4.31 mins), Blind Ambition #1 (4.13 mins) and Blind Ambition #2 (5.57 mins). Now, don't be misled by that multi-angle tag because there was no such feature on my disc, at any rate. This just cuts between the truly amusing, and quite crowded, table read-throughs and the finished cartoon, with some occasionally shared screen-time. It's great to see the people really getting into it. Good fun.

Then we get Storyboard/Animatic Comparisons for three examples - Don't Make Me Over (6.59 mins), The Cleveland-Loretta Quagmire (5.30 mins) and Brian The Bachelor (7.53 mins) which is simply the black and white animatic playing in a box over the finished article. Hmm, I can't quite see the point of this, folks. A bit of filler, really.

The Commentary Tracks are wonderful, as is the little making of featurette, and the read-throughs are fun, so this is indeed a step in the right direction for Family Guy special features. A terrific show that just gets better and better. There is something guaranteed to offend everyone in each and every episode, yet that just adds to its irresistible charm. Seth MacFarlane's creation is a subversive guilt trip for lovers of the sitcom, the world over. It trounces all comers and delivers more laughs per show than a season-full of The Simpsons, from whose estimable influence Family Guy sprang, like some illegitimate heir to the throne of irreverence. Its smart movie references alone garner it high marks, but the characterisation is so neat and bizarrely brazen that I, for one, just can't get enough of it.

Fox's Volume 3 contains some absolute corkers and its AV presentation is more than adequate. The extras are good fun, too, with the chat-tacks coming out tops. Well recommended.