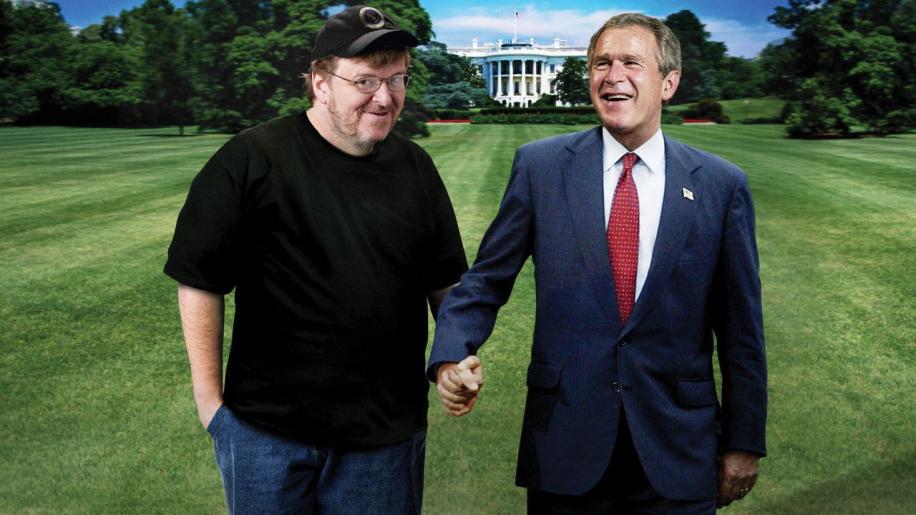 Michael Moore's latest documentary finally arrives on DVD and just ahead of the US Presidential elections, and for good reason. This tour de force of style and substance looks at the Bush administration and uncovers some damming facts and incidents along with Moore's trade mark humour. You will laugh out loud, feel cheated and maybe even cry at this film, which seems to ask the questions most of the US media fail to jump on.

I could go into what Moore uncovers in great detail, but that would spoil things for those who will want to see this excellent documentary, there will also be those who will condemn what is discussed due to their political persuasions. The movie opens with a montage of the 2000 election which every news station called in Gore's favour for Florida, but when Fox news call it for Bush everyone steps back and re-evaluates their earlier reports. What Moore tells us is that the man calling the shots in the Fox news studio that night was actually a Bush relative, that the woman responsible for the Florida recount was actually Bush's campaign manager in that state and that the Judges who voted in his favour where actually appointed by his Dad's administration. Moore jokes about these serious points as being a dream. He follows this up with the footage of Bush sitting reading for school kids when he is told that a second plane has hit the Trade centre in New York, so what does this strong and decisive leader do? Moore asks the questions as bush sits there mesmerised. "Was he wondering if maybe he should have shown up for work more often? Moore refers to the documented fact Bush was on vacation 46% of the time during his first 8 months in office. Or maybe Mr. Bush was wondering why he cut terrorism funding from the FBI, or that he should have read the security briefing from August 6th that Bin Laden was planning to attack?

Moore's film starts as it means to go on, but you can't help feeling that some of his accusations go a little to far and some of the slant of the film is far from impartial. The connection between the Bush family and the Bin Ladens feels laboured, yet he doesn't focus on the smaller details which would maybe do more damage, like Bush unloading $800,000 worth of shares just before his company hit rock bottom or Dick Cheney being the CEO of Halliburton just before taking office in the White House, a company that won contracts to rebuild Iraq, one they didn't have to bid for. These points would have sat better than Moore's conspiracy against the Saudi family.

There is no doubt that some of what Moore presents is disturbing and thought provoking and his documentary is well produced and interesting, but you would struggle to call it unbiased. But then again it is clear that much of what goes on in the White House is far from squeaky clean. Recommended Viewing.