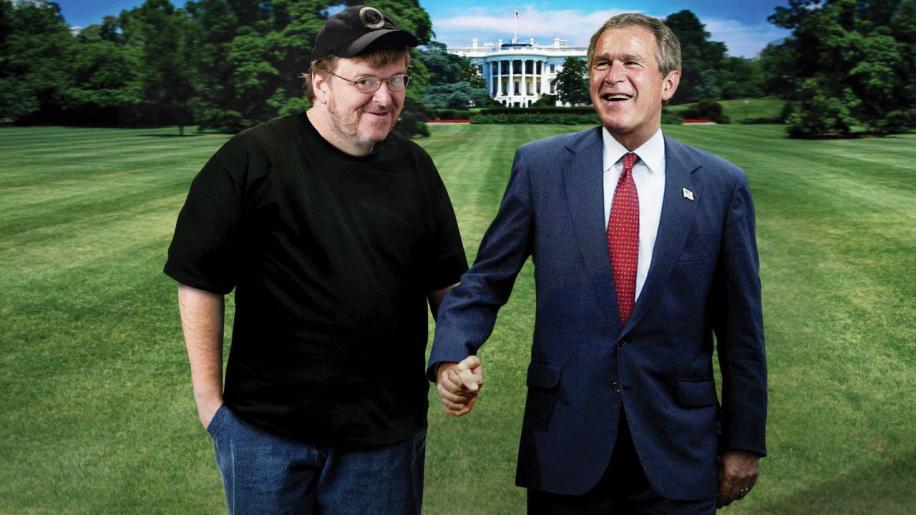 This is a documentary which has clips from an abundance of differing sources and as such the quality is never consistent. Image quality ranges from DV footage of Moore and his interviewees to News footage which has been taken from video tape, to clips from black and white films and stock footage from the vaults. All these various sources don't help overall sharpness and quality, but adds that realistic documentary feel. The disc is presented in 1.78:1 anamorphic widescreen. Being dialogue heavy the Dolby Digital 5.1 soundtrack is more than adequate to convey the film's use of music and interviews. The most disturbing and sonically outstanding moments is the attack on the Trade Centre Towers. We don't see anything, the screen is black, yet the screams explosions and utter chaos is conveyed in stunning 5.1 sound, very creepy. There are plenty of extra contained here to provide more of an insight into the film and it's public response, sadly there is no commentary from Moore on this edition.

The main documentary feature is “The Release of Fahrenheit 911” which shows the reaction of audiences in the States as well as the Cannes result and what some politicians thought of the film. Other extras include the full video footage of Dr Condoleezza Rice's Commission testimony, the rose garden press briefing after Bush's appearance at the commission, both proving further Moore's points from the film. There is a montage on the people of Iraq just before the war, new scenes are featured which missed the final cut of the movie along with scenes including Miami style homeland security. Other extras rounding the disc off are extended interviews, a feature on Arab comedians in New York, video of outside Abu Ghraib prison and eyewitness accounts from Iraq. Whatever your political persuasion, there are facts here that certainly should be stimulating more discussion and this documentary is stunning in it's production values and cleverness. Recommended.