On the road to success? 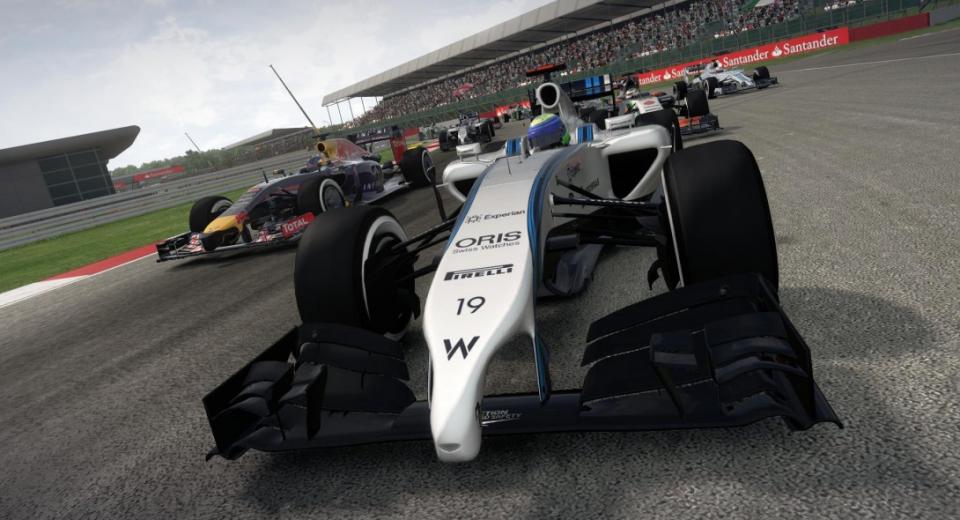 The Codemasters series of F1 games are ones I have a love/hate relationship with.


The glory days of 2010/2011 have long gone, and since moving over to PC gaming, I’ve had nothing but torrid times with F1 games.
Arguments, and rightly so, have been particularly critical of the iterative nature of the series, as well as the EGO engine used to create the game. Interestingly, EGO 3.0, the engine used for F1 2013 is utilised again for F1 2014.

And although I’ll happily admit my inadequacies when it comes to racers, F1 2014 rolled along promising to be the most "accessible" iteration of the series to date (as mentioned in our preview). Fantastic news for me as someone with only rudimentary knowledge of car set-ups and an allergy to staying on the racing line. I’d hoped F1 2014 would introduce these concepts to me and perhaps even teach me something in the process.

Are there any PC Issues? I want to start this by providing you with my very first experience of F1 2014. Once booted, it opened in a 800x600 windowed resolution. It was annoying, but nothing a short trip into the settings won’t fix. Instead a tutorial began, offering no way to find any graphical options. I had no option to skip the tutorial, get into the main menu, name a save file and then finally be allowed into the graphical options. So much for ‘accessible’.

My resolution change was fine, but once again there wasn’t a fullscreen button, just like F1 2013. To the config files I went, changed fullscreen from ‘false’ to ‘true’ and booted up the game. But wait, I’d forgotten to launch Fraps. No problem, alt-tab out and open it, but as I did the game reverted back to the windowed 800x600 setting. Graphics settings, change the resolution, close the game. Config files, ‘false’ to ‘true’, launch the game.

These were issues I toiled with a year ago when playing F1 2013, so why they’re still plaguing the game is a mystery to me. Having to edit config files to get a game to play in fullscreen was unacceptable a year ago, the fact that it’s still the case is simply mind boggling. In addition to this, there’s no mouse support in the menus, alt-tabbing will revert your resolution and fullscreen settings every time. The kicker is that these were issues in F1 2013, Codemasters have had a year and they’re still not fixed.

One thing I can’t fault Codemasters for is the racing in the F1 games. My nightmares inside the menus and options screens were quickly fixed once I was plopped into the car, finally able to play the game. Now being an amateur racing gamer, I used an Xbox 360 controller through my play through, but the game does support 28 different wheels if that’s what you’d prefer.

Aside from some strange occurrences, such as a Caterham leaving my Ferrari in the dust at numerous starts, the racing feels great. Manual KERS is now removed in accordance with the newest rule changes, and as such the only tool you have at your disposal to give you that little boost is DRS when it’s activated. Fuel conservation is much more important with the new weekend limits to fuel reserves; revving too high will guzzle fuel, whereas too low might make you a lot slower.

Racing is great fun, and those wheel to wheel moments will keep you coming back for more. The cars, as far as I can tell, feel great. There are some times when the AI will inexplicably pull a second lead out of absolutely nowhere over a short period of time; I’d attribute it to me simply being slow, but it is odd to see you pulling away from the car behind you while the car in front turns on a rocket pack and disappears into the sunset. Scenario modes have been updated with new, more engaging scenarios added. Instead of "finish in the points" or "win the championship", 2014’s scenarios pit you against other drivers - you’ll see things like "take advantage of Hamilton’s engine issues’"or "beat Alonso to the point finish". It’s a nice addition, but with new content F1 2014 loses old content. The classic mode has been completely omitted this time around, and as such a huge part of the experience in 2013 feels missing. It would have been nice to see this return, but it’s not to be.

The flashback system has returned, representing the paragon of ‘accessibility’. The ability to rewind time a little before a mistake is a bit redundant in terms of avoiding accidents. Hitting someone normally works in your favour due to the low chances of your car being damaged in a collision. Rather, I used it primarily to correct corners I braked too late on, but I can’t deny that I felt a little dirty doing so. Again, though, the flashback system doesn’t really make this game more accessible as it’s not a new addition to the series, we’ve seen it before. Instead of an accessibility tool it feels like a renewable cheat to use if you mess up every now and then. One thing pre-release trailers and footage of F1 2014 have been littered with are comparisons to previous games in the franchise, more specifically F1 2013. I tried to keep away from those comparisons when I was initially playing F1 2014, but the similarities are simply undeniable. Menus have had a colour change, but aside from that nothing is new about them. Once you’re into a career game the in-game emails, news pieces and much more seem exactly the same.

Once you’re driving, cutscenes are identical. Being strapped into your car in the garage is an identical animation from 2013, just mirrored from left to right in some cases. It’s hard to find anything that feels particularly fresh about this game other than new engine sounds and different models for cars. New tracks in Russia and Austria do however provide somewhere fresh to race, and they are fantastic tracks. The disappearance of the classic modes means that tracks like Brands Hatch, Imola and Jerez have gone, though. I couldn’t help but feel that for every feature added, the F1 series lost two more.

This wouldn’t be as much of an issue if not for the price-point of F1 2014. Codemasters are asking around £30-40 for this game and as such it’s being marketed and sold as a ‘new’ title. With a ‘new’ game you have a certain number of expectations in terms of improvements and upgrades from the version that came before, none of which are met by F1 2014. Rather, this feels like a content update and nothing more.

F1 2014 is a fun game, undeniably so. The driving is solid, action packed and often exhilarating. Yet it’s just hard to defend a game that has clearly put so little work into fixing the issues of the previous title. Individual scores in the categories above makes it seem a decent offering - and in many ways it is - but factoring in the recurring issues, and the value for money in this very iterative approach, sees it somewhat marked down. I find it difficult to believe that mouse control in menus and a fullscreen option in-game were impossible to implement in the year that Codemasters had for this game. These issues and bugs were highlighted by players when F1 2013 was released, the fact that they’ve still not been addressed is inexcusable.

A year of work is not represented in F1 2014, instead it seems rushed. It feels like a side project pushed on a team inexperienced enough to put their stamp on a franchise with a fan base as huge as F1. As such it suffers, and therefore so do we as consumers. In playing it ‘safe’ and keeping things the same, Codemasters will undoubtedly further alienate veterans to the series who were frustrated by its iterative nature back in 2012 and 2013. Until Codemasters show some intent to fix the PC specific issues and address the frightening lack of new content, I would give this game a wide berth.