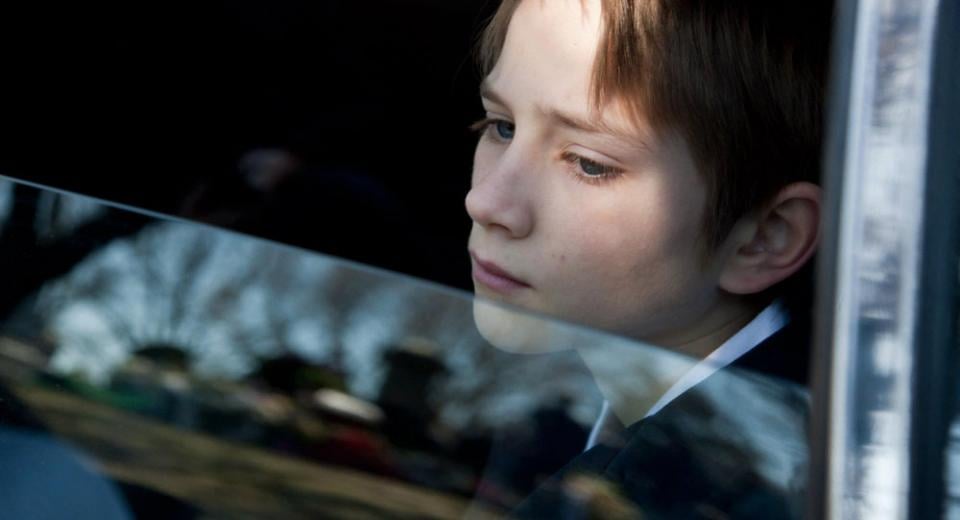 Based on a 2005 book by Jonathan Safran Foer, this movie is a sensitive, compelling and powerful story of a young boy seeking to come to terms with the death of his father in the 9/11 attacks. This SKU contains a Blu-ray, DVD & Ultraviolet download.

Boasting a cast that includes Tom Hanks, Sandra Bullock and Max von Sydow, the starring role goes to total unknown at the time Thomas Horn. He plays Oskar, an intense borderline Aspergeric child who sees the world through different eyes to most people around him. Afraid to communicate and living in a city he finds uncomfortably noisy and full of things that frighten him, he just wants it all to make sense. Forrest Gump this is not, but the almost simplistic world that Oskar inhabits is in some ways similar.

Set in New York the year after the attacks, Oskar is looking in his father’s closet and discovers a key hidden inside a vase. He decides that if he can find the lock the key fits he will extend his bond with his father (Hanks). Through various flash backs, we learn of this close relationship – much more so than with his mother (Bullock). As with many children with Asperger’s or Autism, Oskar’s world is one of secrets, inventions, an almost encyclopaedic knowledge and a lack of social graces. His father has developed games and challenges to motivate Oskar and make him interact with people in the real world and it is by continuing the last mission his father set him that Oskar seeks to solve the challenge and lay the ghost of his father to rest.

One simply cannot get away from the intensity and at times power of Young Thomas Horn’s performance. UK director Stephen Daldry obviously really got under the skin of the screenplay and has communicated exactly what he needed from his cast. This really is a million miles away from the plastic performances one gets from so many young stars and really belies his young years.

Making films about this most shocking of events is a sensitive issue, particularly in New York, where so many were affected directly through the loss of loved ones. This has been entirely understood by the film makers, right down to honouring real victims of the attacks on their recreation of the memorial wall. We do not visit the site of the collapsed towers, nor overly feature them while they burned. There is no sensationalism, just the fact that in those few short seconds it took for the towers to collapse, it changed one small boy’s perception of life forever.

Oskar’s search is by no means random. With his father he had drawn up maps and learnt how to categorise his finds, so he sets up his hunt in the most detailed way possible. We do not get to learn why a back street jeweller would be on the 150thfloor of the World Trade Centre, but it does not seem to matter. We cannot fully penetrate Oskar’s mind and there will always be unanswered questions and a few contradictions along the way. For the most part we are seeing the story through the eyes of Oskar and so if things do not fit into a nice neat box they do not make sense and that makes him frightened, occasionally violent and ultimately incredibly upset.

Along the way we meet many interesting, eccentric and in many cases troubled individuals through whom Oskar starts to learn that he is not the only one on a journey. Max von Sydow plays the “Renter”, a strange old man who is living in Oskar’s Grandmother’s house, refuses to talk and communicates through written notes, gestures and simply “Yes” and “No” written on his hands. Oskar knows his grandparents suffered during World II but his Grandmother does not refer to the old man as her husband, possibly as a result of him abandoning her shortly after she gave birth, turning up only occasionally throughout the intervening years. In any case, he helps young Oskar with the search but retires from the role as he sees the increasing mania the search is causing in his young Grandson.

With Oskar appearing in almost every shot, there must have been an incredible amount of dialogue to learn and that’s without adding in the element of attempting to act out a mental incapacity and the mannerisms that go with it. What becomes clear is that there was a strong bond between the stars and huge mutual respect. What is more amazing is that Young Thomas has never acted in anything before and would have had to learn the art of movie making as he went along. Maybe his real character is not too far away from Oskar in some aspects? One cannot underestimate the performances by any of the cast. Sandra Bullock plays the grief stricken, sometimes insular mother in an understated manner, so unlike some of her more popular performances. Although we do not think of her as a supporting actress that is exactly what she does here. When we finally see her as the loving mother who will do anything to keep her son safe, her true character is revealed.

The whole movie is superbly shot throughout. From the sets and locations through the technical aspects of lighting and sound to the virtually invisible CGI – limited to tidying up a few backgrounds, it’s all good. What also shows through is the organic nature of the movie making process. There is nothing formulaic about this film with the pace dictated by the actor’s interactivity with one another, not some technical set piece or tightly scripted action to steal the scene. Shot mainly on location in New York there has been a concerted effort to avoid it becoming a tour of well-known locations but instead it finds some different places to visit and even when in honey traps like Central Park still finds less common vistas to present.

When eventually Oskar solves the mystery behind the key he does not get the answers he thought he was seeking. His emotions are released through anger and rage. It is only then that he discovers that his mother, who up until now he has failed to make a strong bond with, has known about his quest and has been a step ahead of him pretty much all the way, keeping him safe and helping to smooth the path. He realises just how much she loves him and this helps him come to terms with his loss. The ending of the “6thExpedition” brings him full circle and the closure he seeks. We can only hope that Oskar can now start to re-build his life and start to manage his grief.

All in all Extremely Loud and Incredibly Close takes you on an emotional rollercoaster and explores the complex relationship that a child almost trapped inside his own mind has with the world at large. If you like films to make you think and watch in detail, then I think you will enjoy this.