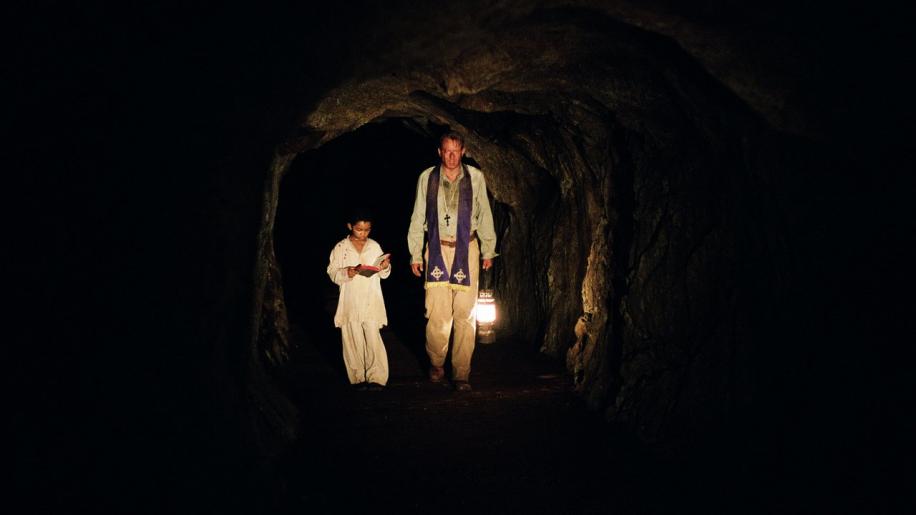 Exorcist the Beginning plots the intermediate years of Father Merrin, played by Max Von Sydow in the original Exorcist movie, reprised in the form of Stellan Skarsgård in this movie. The tale begins with a disenchanted Merrin who has disowned the church as a fallacy that brings neither peace nor joy to the lives of God's subjects. Merrin now works as an expert in history for hire in Africa - money the only language he knows and caring for little else. However, when a mysterious offer enlists Merrin to visit an archaeological dig in Kenya he finds himself drawn back into the world of Christianity. Apparently the dig has unearthed a Byzantine Christian church, even though the age of the site dates to well before the arrival of Christianity in the area. Merrin is to discover the whys and how's of the church, but also to find an idol of a long forgotten deity for the mysterious agent...

Undoubtedly the most famous of horror movies, The Exorcist is nearly always cited as a cinematic masterpiece. The same cannot be said of Exorcist II: The Heretic and III Legion, neither of which recaptured the deep unease of the original. Strange it is, then, that a studio decides that yet another sequel should be made, this time a prequel filling in the narrative holes the first movie left unplugged. Directing Exorcist the Beginning is a responsibility that I do not envy. Making something that follows, and intends to better, one of the seminal titles in cinema is a lesson in impossibilities. It is like someone asking you to design a better snooker ball: Eventually you will arrive at the same solution as the original as the original was just about perfect to start with. It is perhaps this problem that led to the now infamous studio/director split up of the first “Exorcist The beginning” director, and for the studio to make something totally different, with a completely different take and change of director.

Which is fine. If it works. I suppose that the one aspect of Beginning that does strike a chord is the reason Merrin denounces the church and becomes a freelance historian. The revelation is dragged through the movie in order to garner some audience retention, but is worth while for it. Merrin, as most clergy of moderate faith, really only wants the best to come from everyone, and that everyone lives good honest lives. This deep seated belief is really shaken by the aforementioned revelation, instantly allowing the audience to empathise with the situation.

So therein lays the problem with the rest of the movie - it lacks any real sense of humanity. There is no subtlety in Beginning, no creeping sense of dark evil poisoning the frailties of our humanity. There is no focus of normal human life, no grounded facet with which the audience can identify with. Think back to the original and you can remember the mother getting angry toward clueless doctors for putting her daughter through torturous tests because they simply do not understand what is wrong with her. This reality of life is missing from Beginning almost entirely, replaced by a pseudo tribal milieu that may as well be Lord of the Rings for all the believability it has.

In fact Beginning has more in common with Evil Dead 3 than anything else, even down to Evil Dead 3's hilarious self parody. You see, Beginning has one of the worst, mind numbingly, soul shatteringly ill advised end sequences known to humanity and possibly the universe in general. How on earth that character was allowed to exist at all, never mind the near comedic pantomime this sequence devolves into, is beyond me. Fair enough, there has to be an exorcism, that much is evident from the first movie, but what transpires is just plain rude to the watcher.