Neither Gladiator, nor Last Temptation of Christ. It's not even Noah... 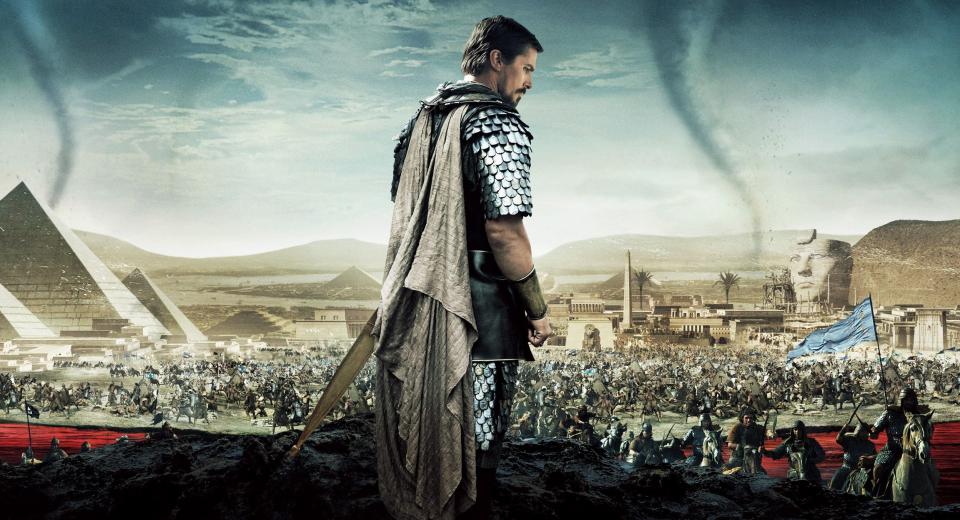 Not quite wielding a Promethian level of stupidity, but also not boasting the same entertaining experience; Exodus eschews fantasy spectacle in favour of an ill-advised attempt at documenting a fantastical OT story.

Dedicating the movie to his late brother, Ridley Scott clearly wanted Exodus: Gods and Kings to be something particularly special; an epic tale of two brothers-from-different-mothers who both strive to lead their people, and, inevitably, end up at odds with one another in the process. Kick-starting with a suitably stunning battle against the Hittites, Scott reminds us of his skills at managing epic set-pieces with seeming ease. The scene is among his best; staged with an eye for detail, whilst the aerial views constantly remind us of the bigger picture, as chariots trample and swords clash. It's fantastic. Indeed, most of the first hour of Exodus is well-paced and well-developed. Both Moses and Ramses are given time to breathe, and the political machinations that conspire to tear them apart are given just enough time to boil over. It basically all starts very Gladiator - in a good way - but, unfortunately, it's only downhill from there.
Scott loses control of his narrative once he starts to get into the meat of the Moses story, attempting to take a Last Temptation of Christ angle when it comes to Moses being visited by God and struggling with the breadth of the task ahead of him. There are sparks of surreal fantasy, much like Aronofsky wielded more effectively in the similarly Old Testament Noah, but it soon turns all too Biblical, only in a documentary fashion, taking the bullet-points of the familiar tale, but failing to evoke either a sense of wonder, or a sense of realism. It's clear Scott is aiming for the latter, which, when dealing with a tale so impossibly fantastical, was a massive misstep, and only ends up being counter-productive; it makes you feel sympathy for the villain of the piece, and only find the actions of an OT God even more deplorable. It’s nice to see the director invested in the same swords and sandals arena as his magnum opus, Gladiator, but we’re a long way off that now. 20th Century Fox bring Exodus: Gods and Kings to UK Region Free Blu-ray with what looks to be exactly the same release(s) that hit US shores over a month back. Primarily, we look at arguably the best package available, the 3-disc 3D set, which boasts separate discs for the 1080p/AVC-encoded 2D presentation and the 1080p/MVC-encoded 3D presentation, both framed in the film’s original theatrical aspect ratio of 2.40:1 widescreen.


Strong but not spectacular 3D is more than made up for by immaculate 2D. Forgetting the movie's problems, Scott’s typically accomplished visuals look stunning.

Looking at the 3D first, there’s likely nothing really here that’s going to persuade – or, by the same token, dissuade – 3D adopters one way or another, but there’s still plenty to enjoy with the benefit of the added dimension. There are several impressive flourishes which could easily be cited as demo moments, and, there’s plenty of strong depth distinguishing layers of characters in the fore-, mid- and background with seamless, blended ease. Sure, there aren’t that many examples of 3D gimmickry, but for those more interested in solid, reliable depth, it’s still an impressive offering.

On the other hand the 2D presentation is immaculate, with more than enough depth and texture to impress in its own way. Detail is resounding good throughout, offering fine object observation and clinical inspection of skin textures and background flourishes. The image is sharp and clear, but with no signs of any defects or digital tinkering whatsoever. The colour scheme hues one way or the other, always intentionally, but still provides some rich tones and vibrancy. Black levels are strong and allow for impressive shadow detail. All in all, it’s near impossible to fault this presentation; a reference release in almost every respect. Things are just as impressive on the aural front, with identical DTS-HD Master Audio 7.1 tracks to accompany the movie on both discs, irrespective of how many dimensions you watch it in.

Dialogue gets clear and coherent presentation from across the frontal array, but the real demo material comes through the dissemination of the effects and score, lighting up the soundstage with furious epic battles and a reasonably effective (although far from Zimmer-framed) score. The quieter moments are paid no less attention, though, with a wonderful presence undercutting the piece, bringing out atmospheric flourishes and ambient touches which leave you engulfed in the fantastical period environment for the entirety of the piece. It’s immersive and engaging throughout, a resoundingly precise but also equally powerful effort which delivers on all counts. More than just a package providing the 3D version of the movie, this is yet another feature-laden package which bests its 2D counterpart by providing a whole extra disc of exclusive extras.

The standard 2D disc boasts the same solid trio of Extras from the single disc 2D-only release, headlined by a typically strong and informative Audio Commentary from Writer/Director Ridley Scott as well as co-writer Jeffrey Caine. We also get almost a quarter of an hour of Extra Footage in the form of Deleted and Extended Scenes, although they haven’t all been polished off and finished, and they certainly don’t preclude Scott for reneging on his promise that this wouldn’t have a later “Director’s Cut” release. Then there’s a “Historical” Guide which offers up some trivia about the period.


It's not uncommon for Ridley Scott release to have a stunning extras package, but you have to stump up for the 3D release in order to get them all.

The additional extras disc is headlined by a Feature-length Documentary (and, by feature-length, we’re talking: as long as the film itself!) which is split into 7 parts and includes absolutely everything you could possibly want to know about the making of the movie, from pre-production right the way through until editing and scoring. It also allows access to a number of additional Featurettes which offer yet more expansion on the production, amounting to over 45 minutes of further background material. Then we get yet another Featurette focussing on the ‘history’ of Moses, with interviews from the cast and crew (who knew him personally), and a Ridley Scott (TM) archive packed with everything from Storyboards to Stills Galleries, Trailers to TV spots. There really isn’t anything more that you could have hoped for, although undoubtedly Scott will prove us wrong when he releases a 4-disc Extended Director’s Cut for the film’s 10th Anniversary.

The Old Testament is a dangerous place to tread and Exodus: Gods and Kings proves this perfectly. It looks like it will take someone braver than Scott to walk that path and deliver something that can be spiritual without being stupid; that can be believable without lacking imagination.


Exodus isn't a bad attempt at bringing Moses to the Big Screen. It's just a largely unremarkable one.

Conversely, 20th Century Fox's 3-disc 2D/3D Blu-ray release is impossible to fault. Video and audio are stunning, and the extras package - just about the only thing Ridley Scott can be relied upon for these days - is comprehensive and glorious. Fans shouldn't hesitate in picking this up, whereas those intrigued by this flawed biblical mess should perhaps consider a rental, until they're Scott completists.


You can buy Exodus: Gods and Kings on Blu-ray here