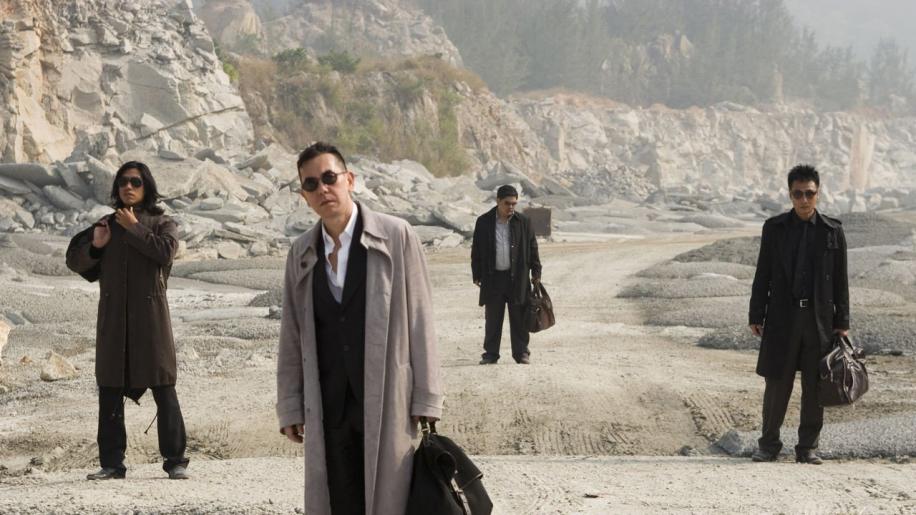 Continuing on from Gerard Magnier's excellent reviews of Johnnie To's seminal two part tale of power struggles within a criminal organisation, Election I/II, AVForums is carrying on with this interest in all things To by looking next at his following project, released directly after the completion of the second instalment of the Election series. Once again, everyone's favourite Hong Kong director of Eastern crime fiction enters the muddy waters of triad territory, complete with assassins, Mexican standoffs, betrayals, shady figures wearing sunglasses and a gloriously copious wasting of ammunition sprinkled throughout.

Exiled unravels the story of a group of men, embroiled in criminality and all with differing objectives. It starts simply enough, with two figures clad in typically dark clothing knocking at a door, looking for an individual named Wo, only to be sent away by the young woman who answers, as if she is afraid as to what this house call will result in. The visitors take this rebuttal and wait in the sun at the nearby small town square. An unclear amount of time later, two further men arrive at the lady's door, again asking after the elusive Wo, only to be similarly turned away. When they too wander a short walk away from the abode, they notice their rivals in the hunt for their uncompleted common goal of locating this man. So begins the first of many long standoffs, that some have taken to mean this film was directly inspired by the genre of spaghetti westerns. I'd take caution when attributing this entirely to the aforementioned oeuvre, as although To utilises the slow pace and glowering eyes that so typified such scenes in classics by luminaries like Sergio Leone et al, this is hardly new ground for Hong Kong films. If anything, it is not the actual camerawork that so boldly highlights this homage, as much as the combination of the setting being placed in Macau, with its European (Portuguese for pedants) architecture coupled with the use of slowly plucked guitar strings. The latter perfectly evokes fond reminiscence of many such stories of machismo told in dusty climes on a shoestring budget. Thus, the groundwork for all that is to follow is laid with care by To and sets up a formula that is to hold the ensuing narrative together and to a certain extent accountable to some familiar rules.

The cast assembled by the director to bring his characters to life will be instantly recognisable to any fan of Johnnie To's work, or even Eastern cinema as a whole, as virtually all have had some part in two of the most critically acclaimed series Hong Kong has had to offer in recent years - the Election and Infernal Affairs films. Heading up the list of faces is the ever dependable Anthony Wong (Beast Cops), once more garnering a role with his lackadaisical style and a healthy dose of ennui, here playing the part of Blaze, an assassin sent to eliminate Wo. He is joined in this task by Lam Suet (later to appear in To's Triangle) as Fat. Opposing them as a duo, intent on foiling any slaying, is Francis Ng (Infernal Affairs II) and Roy Cheung (again Infernal Affairs II and Beast Cops). Taking the mantle of maniacal gang boss and all around bad guy is Simon Yam (Election I/II) and finally, the target of all the suited armed men's gaze, Wo is played by Nick Cheung (The Beast Stalker). I doubt any readers need me to point out the common recurrences amongst the various actor's credits but there are far more besides. The level of cross pollination found in Hong Kong acting circles is always high given the relatively high output of the area, but these few take this to new levels, having all starred in previous To films and often with each other, the prime example being 1999's The Mission which starred all bar Nick Cheung. Thus, understandably, the dynamic is already in place for these players to realise the director's vision.

The narrative continues at what feels to be a pretty fast pace, yet when analysed, it becomes clear that there are many moments of quietude. Once the initial confrontation has occurred and all parties have left the floor strewn with empty shell casings, there is a sudden breaking of the tension in order as to almost entirely reintroduce the cast. Gone is the harsh demeanour of career criminals and in comes a warmth and intrinsically more human side. Luckily, To knows to keep Wong as a more stoic figure, as all his very best performances show him to be a man who acts at his prime when letting his downtrodden and world weariness suffuse his every action. This element of duality to the characters is brought through the film in various ways, with the opposing pairs of protectors and assassins each having a lead (Wong and Ng) and a subordinate (Suet and Cheung). There is also the introduction, as highlighted by photographs at key stages of the narrative, of the double lives that have been led, with both the past and the present vying for priority in the protagonist's lives. Some are duty bound to deliver on commitments they have made as adults, whereas others are intent on holding onto the ties that have bound the group as friends since childhood. This brings us into familiar territory, with the usual themes of Hong Kong gangster fare, namely ambiguous morality and the nature of honour.

To's vision of a twisted world of criminality that destroys individuals and corrupts personal ties is well rounded. The story itself harks back in many ways to the golden era of “heroic bloodshed”, with the essence of the piece being equal parts fate, friendship and honour. As with any such tale, it could be argued that the ending is somewhat telegraphed, but this is a moot point. It has long been an established tradition, for honour bound anti-heroes of Eastern cinema, that not all will likely make it to the end credits. By their very nature, they are painted as dinosaurs, supposed to hark back to an age where even criminals had morals and codes by which they lived. Whether you believe this to be the case or not is arguable and quite frankly negligible, all that matters is that it makes for great cinema. All the constituent parts of this rag tag group's gripping escapades are brought to life in a manner that is reminiscent of not only the best the Eastern gangster genre has to offer, but also that of the spaghetti western. Sprays of arterial crimson light up the screen like a miniature firework display in a finale that has enough squibs and gunsmoke to make even Peckinpah proud and the sentiment behind this brief but hectic battle also draws a fine comparison to The Wild Bunch. Bullets, betrayal, bloodshed and brotherhood - what more could you want?