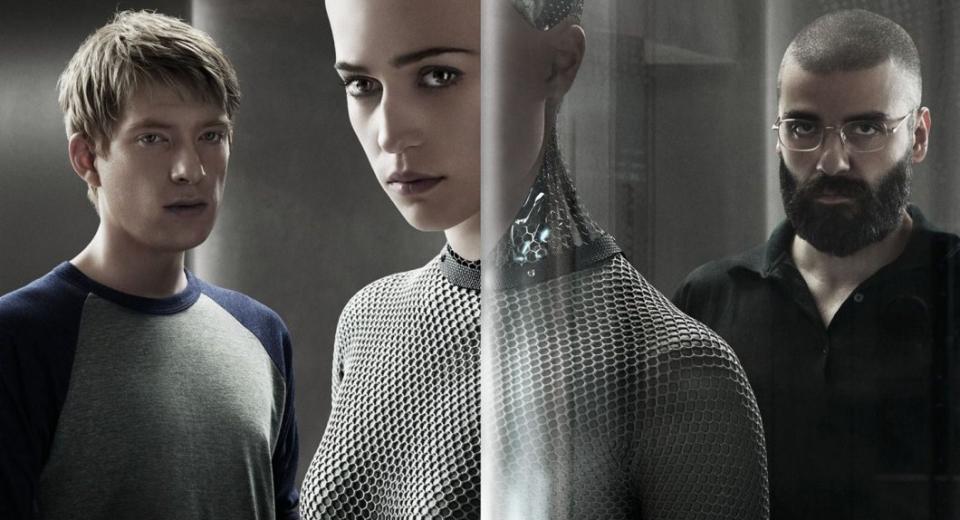 Thoughtful but intense, bold but philosophical, Ex Machina is the directorial debut of writer Alex Garland and one of the best sci-fi films of 2015.

Fans of great sci-fi, and in particular Ridley Scott's masterpiece Blade Runner, will absolutely love this thought-provoking gem. It may not look or sound like Blade Runner, or be as influential, but it shares one vital element. Garland, using a simplistic analogy, has essentially taken the Voight-Kampff interviews from that classic and fashioned them into an entire movie. Of course, the VK test was utterly fictional, but it was based on a real thing - the Turing test - a theory on how to differentiate between the responses of a human and a machine. The idea was that a perfect A.I. would pass this test and be indiscernible from its human counterparts, and Garland brings this whole concept to wonderful, dark, and tense life within Ex Machina.
Working on a minimalistic budget and, as with Dredd, in essentially one distinctive but still limited location, Garland fashions taut thrills from simple verbal exchanges, and sows seeds of mistrust not only in his characters but in his audience. You'll question what you're seeing as much as the characters question who they are - man, machine, or God? And then you'll wonder whether, morally, it makes any difference; whether the blurring of a line between person and machine has the effect of also blurring the line between machines as soul-less objects and as thinking and feeling entities who, you might argue, arguably have the same basic rights as you or I. Slick and stylish, provocative and powerful, this impressively engineered construct is not to be missed.

Ex Machina comes to UK Region Free Blu-ray courtesy of Universal Studios, as opposed to Lionsgate, who are in charge of the Stateside Blu-ray. Unfortunately, whilst many were hoping that Universal would pull off the more impressive of the two video presentations, Ex Machina looks surprisingly average at best on this release in this 1080p/AVC-encoded guise, framed in its correct theatrical aspect ratio of 2.40:1 widescreen. I’m sure Lionsgate can do worse if they really try hard (Expendables 2) but I’d be surprised if this wasn’t the exact same presentation that the US are going to get next month.


Whilst Ex Machina never looked like precision engineering at the cinema, it hardly amounts to demo material on Blu-ray.

With few – if indeed any – truly spectacular shots (see landscape exceptions noted later), it’s a shame that the stark, futuristic/minimalist design doesn’t look better in HD. It should be striking with clarity, given the technology that’s being touted here, but unfortunately it’s plagued by a meandering softness which creeps in around the out-of-focus edges and besets the otherwise seemingly prepped-for-demo material. Detail still tries to make an impression, colours are still inherently vibrant, and the electronic glows from AVA are particularly striking, but it doesn’t really make up for that nagging feeling that this image should look far better than it does.

As stated, the odd thing is that this movie didn’t look spectacular theatrically – it is a very modestly budgeted piece of work after all – but it’s frustratingly flawed here, with things like crush, haloing and banding almost the least of your worries (the power cut sequences, and the dancing scene frustrate immensely though). Some might argue that it’s perhaps not the fault of the presentation, but of the material, and an argument could be made for this with the panoramic vista shots that are towards the beginning, and peppered throughout the piece, showcasing just what the film should look like. Perhaps Garland was going for a more ‘classic’ look, but the end result is at worst outright shoddy and at best pretty damn far from spectacular. Disappointing.

The next big blow – which perhaps would have been somewhat softened by an improved picture quality over the US counterpart – is the fact that the UK release doesn’t sport the debut DTS-X track which will adorn Lionsgates’s US disc when it's released next month. Sure, few of us are going to have the benefit of being able to enjoy DTS-X at this stage, but from a future-proof perspective it’s a no-brainer. Some might argue that Ex Machina is an odd choice for being the flagship vehicle for this track, but that doesn’t really fly either. Whilst not in-your-face or particularly bombastic, it has quite an effective minimalist sound design which broods with intensity, crackling to life at a couple of latter stages but maintaining effective tension throughout as the piece gets increasingly dark. It’s no surprise to find Portishead band members involved in the score, which is a highly effective effort.

Cas Harlow reviewed the UK DTS-HD Master Audio soundtrack on a 5.1-channel setup - The DTS-HD MA 5.1 track does a strong job but can’t help but stand in the shadow of that alternative DTS:X US release. Dialogue comes across clearly and coherently throughout; effects are sparsely but discretely separated across the array, whilst the aforementioned score often provides the highlight, both in terms of rear activity and LFE input. The whipping of helicopter blades, or echoing clamour of the power cut alarm both disturb the disquieting peace, whilst the more striking moments of the score will give you the shivers (and the single song track properly shakes things up too). All in all it’s not a bad effort, but it is overshadowed by what’s hovering on the horizon.


Disappointing video, and no DTS-X. What next? Did we lose some of the extras too?

Steve Withers reviewed the US DTS:X soundtrack on a 7.2.4-channel setup - We finally had the chance to review the DTS:X soundtrack on the US Blu-ray release of Ex Machina courtesy of a beta firmware update on our Denon AVR-X7200W. The speaker configuration is exactly the same as the one we use for Dolby Atmos, so there are the front three channels, two sides, two rears, two subwoofers and four overhead channels. Whilst Ex Machina might not see like an obvious choice for an object-based mix, the soundtrack actually delivers a surprisingly immersive experience. The film only had a standard 5.1-channel mix theatrically, which suggests that Lionsgate had the soundtrack specially remixed for this DTS:X release and that would probably explain its absence from Universal's UK disc.

The nature of the story means that the soundtrack is dominated by dialogue but the DTS:X mix does a wonderful job of giving that dialogue a sense of environment. The majority of the action takes place in an underground complex and the dialogue always sounds appropriate, with a great sense of atmosphere. The bass kicks in during the scenes where the power is cut and comes back on, often shocking you with its sense of envelopment; whilst the automated announcements emanate from overhead. The excellent score is mixed into all the speakers, allowing it to immerse the viewer whilst also driving the narrative; and when the audio gets a chance, such as with the helicopter at the beginning and end, the sound mixers take full advantage of the additional channels. However overall the DTS:X mix on Ex Machina demonstrates how a well-executed soundtrack can subtly enhance your viewing experience.

The nail in the coffin is surely on the extras front, where we lose out on what is ostensibly a feature-packed offering – with a multi-part Making-Of Documentary, a Q & A with the cast and crew, and a series of 8 vignettes supposedly adorning the US disc – in favour of five 2-3 minute EPK snippets which are about 50% comprised of footage from the final film. That’s little over 5 minutes of interview clips in terms of actual worthwhile material. When we know there’s more available in a month’s time, it’s hard not to be disappointing on this front as well.


This may be one of the best looking steelbooks of the year so far, but, if you're Region-A capable, you might want to put the US disc in it.

This silver lining to all of this is the actual Steelbook release itself. Surely one of the best-looking Steelbook releases we've seen thus far this year, it's a thing of beauty which, for collectors, will probably make up for the disappointing technical side to this release. The way you have to balance it is looking at the fact that, aside from a few more extras, the US release probably won't be, practically, all that better for the average consumer. We can all wish for better video but the reality is that the video is likely to be equally flawed, so it's only the audio that's a guarantee, and many people won't be able to enjoy the added layers afforded by DTS:X. So if the practical use of the discs is a lot more comparable, then this Zavvi Exclusive disc is the one to get.

Thickly swathed in a glossy laminate lacquer, it hosts the design shape below (only in a full portrait rather than landscape shot) with the headless body framed on the white case. The embossing is astounding, with the whole shell body rippling out of the front of the case, with shimmering silver and rich black. On the reverse is the poster shot of AVA reclining, with the debossed letters AVA above. It's simple yet intricate, bold yet minimalist, subtle yet striking, and I'm sure that steelbook fans will rejoice in having this one in-hand.

Far more contemplative than some might have been expecting – essentially broken down to increasingly tense conversations between a trio of individuals – don’t come into Ex Machina expecting J.J. Abrams sci-fi (or Michael Bay sci-fi for that matter). It’s far more thoughtful and intense, and in the same vein as, although a completely different film to, Her. It demands your attention, and provokes conversation, and is the kind of sci-fi excellence we’ve been all been waiting for.


Like all truly effective sci-fi works, you're left thinking about the ideas and issues raised in the film long after the credits roll.

Unfortunately this UK Region Free release of Ex Machina is disappointing to say the least. Terrible video, and a lacking audio track (when you know that DTS:X is imminent with the US release), as well as a lack of the US extras leave this an inferior release for fans of the film. The flipside argument is that many aren't capable of playing Region A discs, so the US title is not an option. In addition, even more are probably unable to make use of the DTS:X track, and may have no plans to change their living room ceilings anytime soon, in which case the soundtrack upgrade makes little odds. And some still probably won't be that bothered about the loss of a few extra featurettes. Which actually leaves the UK release as not that practically different. And if you're a steelbook fan, this is unquestionably a must-have addition to your collection - one of the best looking releases of the year. Certainly, irrespective of the technical problems of the release, try not to let that distract you away from one of the most thought-provoking sci-fis in recent times.