The medium is the message 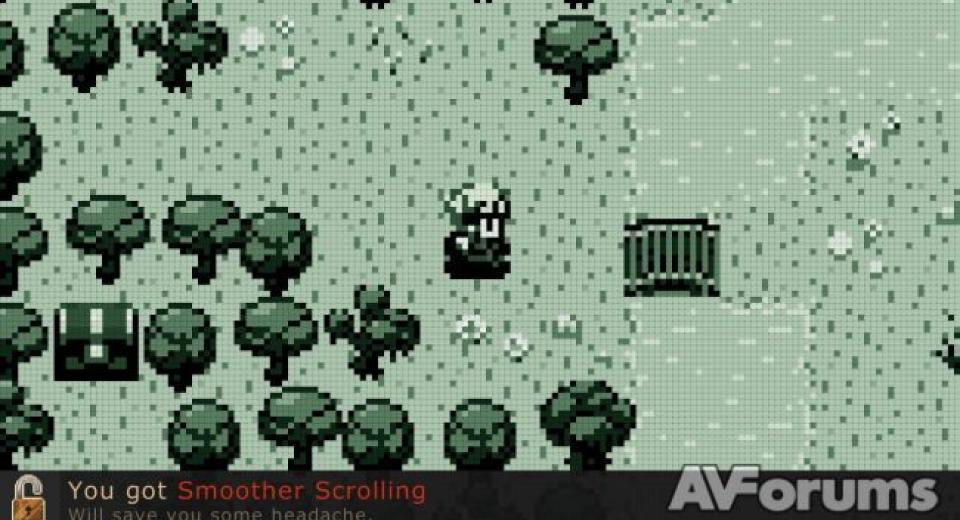 Okay, let’s start with this: I’m just the right age for this kind of nostalgia-fest. I’m a 33 year old who’s gradually edging towards the phase of life when contemplating the past is more interesting than contemplating the future. Google Glass? Pah. When I was a youngster we had X-Ray Specs via mail order. Those were the days...

So anyway, when I first heard of Evoland I naturally suspected it had been created to cater exclusively to my desire for rose-tinted revivals of games I loved once but now find unplayable. (I’m also secretly confident I was the motivation behind TAITO releasing Space Invaders Infinity Gene, and Brian Provinciano developing Retro City Rampage -- but that's another story.) Unfortunately, like so many other attempts to Frankenstein bits of old dead games into something new and fresh, Evoland doesn’t quite deliver in the gameplay stakes. Along the way it pays faithful tribute to many of the greats including Zelda and Final Fantasy, and to a lesser extent Chrono Trigger and Diablo, but as a game it fails to knit those elements into a whole.

I felt the need to specify its failings are ‘as a game’ because there are clues littered throughout that suggest ‘as a game’ is not necessarily how the developers Shiro Games intend this project to be judged. Most notably, if you hunt around in the first village, you’ll find a reference to Marshall McLuhan’s phrase ‘the medium is the message’. McLuhan’s point was that content is less important that the medium that delivers it. In other words: Approach Evoland for plot or for top-drawer mechanics or content in general, and you’ll be disappointed.

Fine. So if not a typical game, what is Evoland? Well, at its core it’s a short interactive documentary about the history of the action RPG genre: an interesting if insubstantial jaunt through the evolution of the medium. The silent, monochromatic opening has a distinct Legend of Zelda feel about it, but loot found in treasure chests incrementally transforms most aspects of Evoland’s presentation and gameplay. Examples of early additions include heart containers for energy, a sword and save points.

Development of game mechanics felt a little hollow compared with the presentational changes, which rang the nostalgia bell louder and more frequently. As the number of colours increased and the audio was fleshed out there were moments when it really felt as if I were transported back -- particularly when I was awarded ‘Mode 7’. At around the halfway point an N64-style third dimension is added. By the end it’s all HD textures and ambient lighting and so on, and the transition between the stages is natural and pleasing.

Early on our protagonist - whose name defaults to Clink - hacks and slashes his way through various one-hit-kill enemies. Combat couldn’t be simpler, there’s a single attack button and... that’s it. No shield. No defence at all, in fact.

Bombs and a bow make an appearance, but far too late in the game for my liking. It’s one of a number of areas in which Evoland’s pacing feels off, a flaw which is somehow exacerbated by the short length of the game. According to Steam my entire playthrough clocked in at less than four hours. An early world-updating treasure box unlocks turn-based combat, which rears its tedious head during the overworld sections. Battles are the traditional random-encounter affairs that are sadly just as simplistic as the hack ‘n’ slash combat mentioned previously, only more time-consuming. You can hammer the one ‘attack’ command and get through almost any encounter.

Later on, you’re introduced to Kaeris (yeah, the name gags aren't a high point), who joins your team and varies things up only in as much as you might find yourself spamming her heal spell in between spamming Clink’s sword attack during some of the later fights.

There are a couple of notable genre-defining omissions. Evoland has only one proper puzzle section. It's an interesting idea involving time-warping crystals, but it's short and not at all challenging. More curious is that the game features no side-quests at all. The closest it comes is an optional card game called Double Twin that appears to be based on FF8’s Triple Triad, which also inspired Skylanders Giants’ Skystones. Cards can be found in secret treasure chests around the world, as can ‘hidden stars’, although I have to confess I never got to grips with the point of the latter, if there was one at all. Evoland isn’t without humour, referencing a range of games from Mario to Minecraft. Some gags and observations are spot-on, some fall a bit flat. I enjoyed the Diablo-esque dungeon in which enemies drop a ton of useless loot when they die, and I'd advise you take the time to read the items' descriptions. They're amusing because at first glance they seem legit -- for example, there's the Zodiac Earring which confers "+0.1 defence on ears". Unfortunately, the gameplay in that particular dungeon is oddly shoehorned-in, neither fitting with what came before or after.

And there's the thing: the medium is the message, at the cost of the content. Evoland takes our hand and gently guides us through a partial history of the action RPG genre. Taken purely as an interactive documentary it's a warm, nostalgic experience. But as a game on its own terms, it's fatally oversimplified. Basic game mechanics, a non-existent plot and a lack of engaging puzzles will almost certainly blind people to the merits of Evoland.

Despite those reservations, I would recommend it. I think it’s best played in one sitting, and likely only once. But I see it like this: for under £7, Evoland is a full evening’s worth of solid entertainment - and I’m sure we’ve all spent much more than that in the cinema or elsewhere without a second thought. Give it a look.

Note: In a previous life Evoland was a Ludum Dare winner. It’s still available here in its ‘classic’ form. The iOS version has not been released at the time of this review, but is due to be out at the end of April.

Shiro Games have put together a diverting whistle-stop tour through a much-loved aspect of gaming history. Evoland's story and gameplay might not shine in their own right, but if the idea of a short interactive documentary on the history of action-RPGs takes your fancy, you should definitely check it out.