‘Of all the places I could be, I just want to be here with you…’ 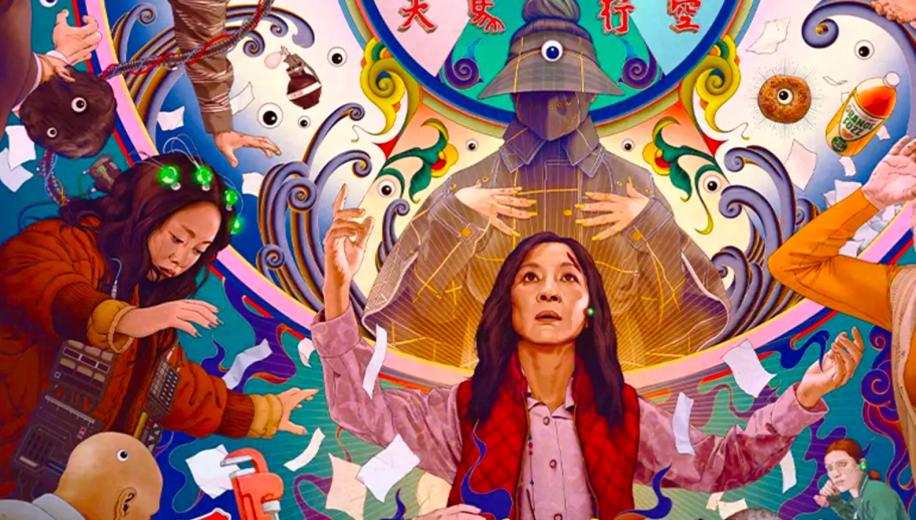 Everything Everywhere All at Once Movie (2022)

Dizzying and imaginative absurdism meets profound and heartfelt ode to the family in this utterly charming, joyous and clinically insane crowd pleaser.

Like buses, you wait ages for a Multiverse Movie and, hilariously on-brand, two come along within the space of a week. Cosmic coincidence (or is it?) aside, this also has it’s own Marvel link, being produced by Joe and Anthony Russo….yet it’s an altogether very different beast from the MCU's own interpretation of ‘modal realism’ (it’s a thing, honest…).

Michelle Yeoh is Evelyn, a co-owner of a laundromat who is experiencing something of an existential crisis: she’s fallen out of love with her husband (Ke Huy Quan) who secretly has started divorce proceedings against her; she’s constantly disappointed with her daughter (Stephanie Hsu) who seemingly only makes decisions that are designed to inflict maximum embarrassment on her; and she still can’t please her demanding father who looks remarkably like the living legend that is James Hong. Coupled with an impending IRS audit led by a brilliantly cast Jamie Lee Curtis, her life is spiralling out of control… until a visit from a different husband who looks exactly like her husband explains the notion that we are all living within one great multiverse: where every life choice made creates another universe, one that actually does take the ‘road not taken’. And a great evil is threatening it all, an evil that only THIS Evelyn can help stop…

One look at the superb trailer for this should leave you in no uncertain terms that this ain’t no superhero movie. Gargantuanly plotted, freewheeling wildly between genres and tones, it’s a cinematic explosion that’s barely contained within the confines of the film itself. Pinballing between quirky family drama to slickly choreographed martial arts jam to pratfalling comedy to absurdist existential drama, before turning in on itself and bringing all crashing together into a film that slowly creeps up on you before revealing the very humanist themes at its core.

Themes of regret and choices not made, of ‘best lives’ not lived, of how these things can ripple through and out into the lives of others, the ramifications of which can be felt across generations… of how near-terminal disappointment and self-loathing can manifest in so many ways, yet inflict its pain on the old and the young alike. Deeply personal and emotional themes that should have no place in a film where a rock with googly eyes swears at another rock in written text…

… and therein lies the real magic of the film. The Daniels’ (Kwan and Scheinert, the creators of Swiss Army Man) have created a singular work that somehow blends all the absurdism that almost anyone could muster in the space of 2 hours 19 mins together with these massive and deeply personal themes and just make it all work so brilliantly.

And believe me, when it comes to its absurdity, the film takes itself very seriously. Completely unhinged in its depiction of multiple universes, it's often brilliantly leftfield in some of these depictions, with some reminding you serious cineastes out there of some films you may find familiar (where else would universes from Wong Kar Wai crash straight into a Pixar one?). Meta in devilishly inventive ways (is the universe where Yeoh is a famous movie star starring in Crazy Rich Asians our universe?) and realised through some stunning visual effects and stunt work, the different universes are beautifully used in and around both the plot and the set pieces, perfectly designed to weave in and out of them and all incredibly orchestrated.

But the heart of the film is its cast and in Michelle Yeoh, the Daniels’ found their perfect anchor. Playing to all her considerable strengths, she is incredible in this – utterly convincing in each universe's very different Evelyn, from superb martial artist to hotdog fingered frump and ultimately a mother struggling with her place in her own world, amongst all the insanity happening around her, she keeps our attention, she keeps her grip on our hearts and she means that no matter what crazed dementedness the film throws at us, it never loses us. She is just sublime.

... the film hangs together perfectly, a testament to a unique creative duo who continue to give us unique and creative works

And the rest of the cast are just as good – Quan (who disconcertingly still sounds exactly like Data and Short Round), Hsu, Hong and Curtis are nothing less than fantastic support to Yeoh, equally adept at creating new and convincing versions of themselves almost at the drop of a hat.

But it’s the Daniels’ film first and foremost. From the script that needs to be as tight as a drum to ensure all those genre flips and tonal lurches feel organic and of a whole, to the beautifully stylised and crafted visuals and on to the lilting and evocative soundtrack by Son Lux, the film hangs together perfectly, a testament to a unique creative duo who continue to give us unique and creative works.

Another reviewer in another universe might mention that ultimately, for all the pizazz on show, for all its perceived uniqueness and absurdity, it’s just a film whose message is very simply “we all need to talk a little more”. And that same reviewer might also point out that there may be a little too much here for some to take in, a little too much whimsy and silliness that was there just for the sake of it... but thankfully we don’t live in that universe.

Instead, we live in a universe that can savour the absolute majesty of this crazed, acid trip of a film that perfectly uses the most out-there scientific notions of today to create a beautifully human and deeply emotional story that entertains on almost every level.

One of the very best films of the year.

Everything Everywhere All at Once is out in UK Cinemas NOW!