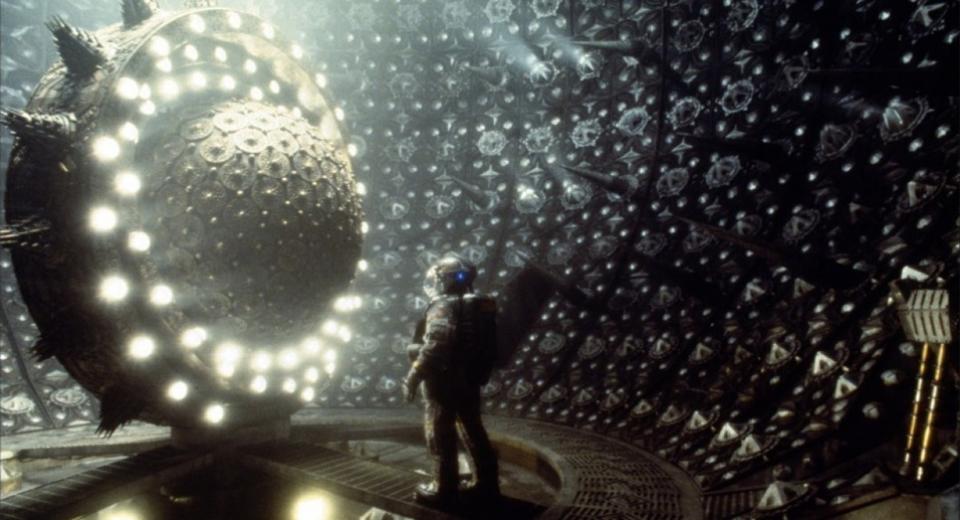 The theory goes something like this. Put a team of monkeys in front of typewriters and leave them alone for long enough and they will produce a complete Shakespeare play. There should be a Hollywood version of this. Sit Paul W.S Anderson in front of enough film cameras, and eventually he will produce a decent film. The monkey theory, quite frankly, stretches credibility to breaking point. The Anderson one, however, doesn't. Amazingly, he has produced one decent film amongst all the dross he has made. And that film is the sci-fi shocker Event Horizon. It may not be OSCAR winning material; it may not even be amongst the very best of the sci-fi horror genre. But what it does do is provide enough style and genuine shocks to merit a place in any Blu-ray collection

The year is 2047, and a ship with an experimental drive called the “Event Horizon” has been missing for seven years. It turns up suddenly in a decaying orbit around Neptune, and a rescue ship called “The Lewis and Clark” is sent out to investigate. The ship arrives at The Event Horizon, and the crew board the ship to investigate what has happened. The ship is deserted apart from a corpse floating on the bridge with its eyes gauged out. The situation gets a lot worse when it is discovered that the experimental drive on the ship is a gravity drive designed to create a temporary black hole to transport the ship vast differences in a short time. However, messing with the physical dimensions of space is never a good idea, and has disastrous consequences for the rescue crew.

As with most films of this type, the basic plot of Event Horizon does not sound all that promising when written down on paper. However, the style with which the film is shot, and the quality of the acting, raises the film above the pulpy level of the story and turns it into an effective shocker. The film has a very effective and slow build, building up tension during the first act. The set design of the abandoned ship is just superb, and adds a lot to the spooky atmosphere the film provides. The ship is almost like an extra character (which, without giving away too much of the plot, is very appropriate), and the whole build up engenders genuine fear within the viewer. Flashes of what actually happened to the crew are brief freeze-frame moments - but they are truly disturbing images. Once the first act is out of the way, Anderson ratchets up the gore level, always managing to provide gross out moments without ever being gratuitous. Make no mistake here, the gore levels are strong - and provide some really unsettling images. But rarely, for films of this type, the balance between genuine unsettling atmosphere and all-out gore is well thought out. Some have complained that the third act leans too much towards the gore - but I personally do not agree. I feel that the third act is a nice counter-balance to the build up that has gone before. It is quite rare in this day and age that a film actually delivers on the horror it promises - but Anderson does here.

The film may be well balanced, but it needs a good cast to bring the world to life - and courtesy of the mainly British talent, the acting is superb. The acting roll call is very impressive, featuring Sam Neil, Laurence Fishbourne, Jason Isaacs, Kathleen Quinlan, and Joely Richardson to name but a few. You would expect good performances with a cast of this calibre, and you are certainly not disappointed. It is true that they are certainly not performing Shakespeare - and the script is probably the weakest part of the film - but within the confines of the genre the performances are perfectly fine. The actors bring a gravitas to the film that is certainly not provided by the dialogue, and this adds a lot towards making the film a believable excursion into a hellish world.

Event Horizon is a very difficult film to categorise, but a recent film is probably the best parallel to judge it by. Sunshine covers very similar ground to Event Horizon but to this reviewer at least, the latter is by far the better film. Sunshine may take a more esoteric approach to the subject, but sometimes all the viewer wants is to cut to the chase. Event Horizon does this. It doesn't bother about providing deep back story about the events that befell the ship, and the film doesn't concern itself with unnecessary character background. We learn just enough about events in order to progress the story necessarily. This means that the slow build up of the first act is like that long, slow, terrifying ride up the first slope of a rollercoaster and once you reach the top, the film just keeps the momentum going all the way until the end. This simplistic structure is one that leads a lot of people to decry the film, but to me it is why it just works.

As previously mentioned, the script is weak, and the plot does have its share of contrivances which in retrospect make little sense. But despite these flaws, there is much to enjoy here. The film has a solid structure, fantastic set design, and generally good performances. Yes, it could never be called a classic - but it is a film you are likely to come back to again and again. And for that reason, it is worthy of a place in any sci-fi / horror fan's collection.