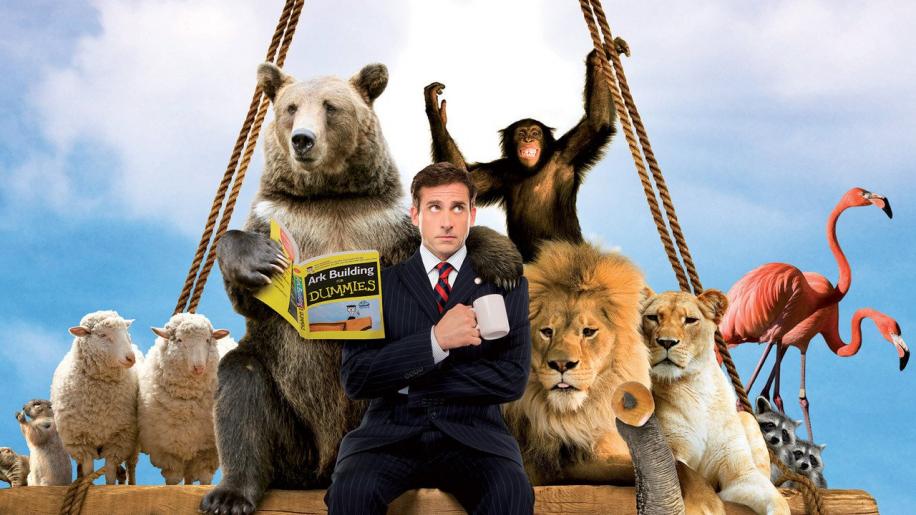 In 2003, director Tom Shadyac, made us suffer Bruce Almighty. Instead of letting sleeping dogs lie though he then thrust upon an unsuspecting audience a follow up, Evan Almighty.

Having run for and successfully been voted into Congress, Evan (Steve Carell) has moved on from his talking head position of newsreader. He relocates to a larger house in a more desirable estate and he seems to have caught the eye of more senior politicians around him. Life for Evan has never looked rosier. Before you know it though God (Morgan Freeman) descends upon poor witless Evan and asks him to build an ark; after all Evan did want to "Change the World" and there just so happens to be a flood coming... allegedly.

And lo Evan receives a box of tools; nail gun, power saw, routers? No, what hapless Evan has to work with are old-fashioned wooden mallets, chisels and saws. Gopher wood is deposited on his lawn. His hair and beard grow uncontrollably no matter how often he trims or shaves. Gone are the immaculate suits, this weeks fashion are musty, moth eaten old robes. Quite fetching they are too!

His virgin political career now in ruins as he is suspended, his wife and family obviously thinking that the pressures of work have tipped Evan over the edge leave, animals from all walks of life arrive in pairs to camp out near his residence; all kinds of animals appear. All Evan has left is his faith, his command to complete the ark and a rapidly approaching deadline.

Shadyac really should have called it a day after the disastrous first outing of Bruce Almighty, in saying that so should Morgan Freeman and Steve Carell but then this is Hollywood and Hollywood loves nothing better than more money and to try and resurrect this prodigal son of a project. No one likes failure though and based on that assumption I somehow don't think that we'll be seeing another sequel from this Lazarus of a franchise.

What we see here we've seen before. Whereas the prospect of becoming God could have provided infinite amusing possibilities, becoming a reborn Noah is a one trick pony and unfortunately that pony seems to have broken its leg at the first hurdle. Once you see the growing beard, the hoards of wilder beast flooding into a residential estate helping build this wooden Titanic, the all too often guano jokes and slapstick older than the Dead Sea Scrolls there's nowhere to go; the humour unfortunately just isn't there.

In saying that though remember that I'm not really the target audience for this film. Evan Almighty can't and doesn't try to reach out to my funny bone. This is squarely directed to a younger audience and on that level it actually works. The cute animals, toilet humour and staged theatrics went down well with my co-viewer; a young 11 year old who most definitely gave his seal of approval with the gladiatorial thumbs up. So it's obviously a family film, but then you knew that from the start. Sit down and watch with them, not on your own. That way you'll gain enjoyment from their experience of the film rather than any direct stimulation you will receive from it directly.