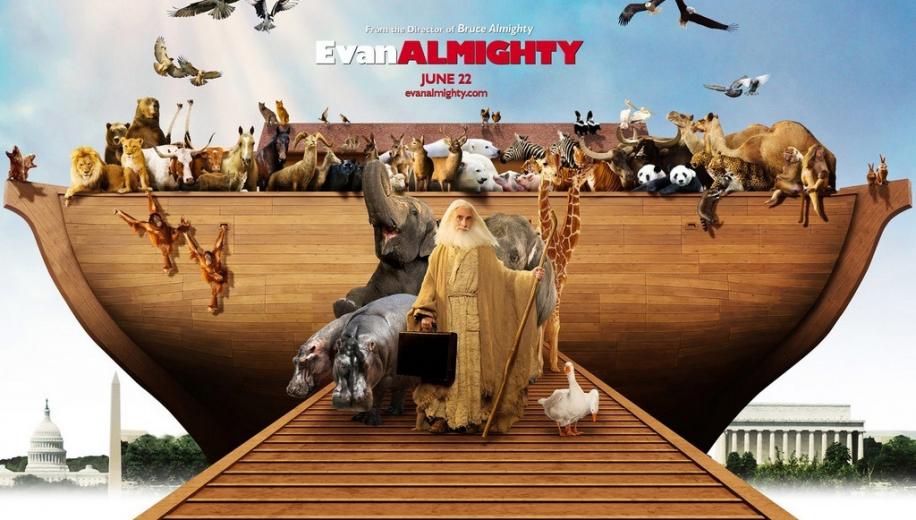 Evan Almighty is presented in 2.35:1 anamorphic widescreen. Colours are spot on, facial tones especially pleasing. No overblown whites, detail at the upper end of the spectrum more than acceptable, with whispy clouds easily picked out from the very light blue sky. There are few dark scenes but those which are on offer again show little signs of crush. Primaries are stable with no contrast or brightness fluctuations and no blocking which can occur in standard definition when a static, single colour is presented on screen.

The print is defined by edge enhancement throughout though and whilst not excessive its continued appearance does somewhat lead your eyes to those areas of the image. The print is completely blemish free, no dirt or scratches.

Fine detail is somewhat lost in the distance as the image itself is rather soft, never really popping out from your screen. Those hoards of animals which stretch out into the distance really do get a little blurred.

On offer for the English speaking community are a standard Dolby Digital 5.1 and a Dolby Digital 2.0 for this visually impaired. Obviously for the purpose of this review I will consider the former of these two tracks.

Evan Almighty presents a predominantly frontal stage for the audio with seldom use of your surrounds. Dialogue is always clear and well presented emanating obviously from your centre and much is the same for the little effects and score itself. What you should be expecting here is quite a narrow field. Although the left and right are used they don't add any ambiance or depth to the presentation. Mid and high tones always crisp, LFE like your rears seldom in effect but comes crashing in during the climactic end scenes.

Surround use is limited to animal effects, birds chirping, wings flapping, and general noises from animal grunts or movements. Most of these sounds, whilst again are clear, really don't fit well enough into the film, so obviously being a product of post added Foley use.

Whilst perhaps let down by a mediocre film itself and no revelation from the video or audio, Universal have seen fit to add a fair set of extras for this film. No commentary, which perhaps is a blessing in itself though, we do have a menagerie of other snippets to amuse ourselves with.

Each of the above featurettes is presented by Steve Carell himself and most, like the film itself, are there for disc space and don't really add much dimension to this package. The kids again will love the outtakes and animal features. I did enjoy the inclusion of eco friendly features, showing how the film tried to keep its environmental impact to a bare minimum. Hopefully if your kids watch these two small features then they themselves will start trying to be more eco friendly.

They should have laid the Almighty franchise to rest when Bruce Almighty failed so miserably as it did. For the same director to produce the same film with the same lack of laughs is a sin in itself and I do hope that he never returns to film another. Like Bruce Almighty before it, this is no Cecil B. DeMille.

For myself I have to admit that the corners of my mouth rose on a couple of occasions when references to The Simpsons and Jaws entered the frame. That was it though and I was left more than a little disappointed with Evan Almighty.

As mentioned before though this is a family movie and should only be watched as such. Get your family around you, pop that corn and enjoy your kids enjoying their kind of films. Your kids will love it, especially if they have a keen interest in animals.