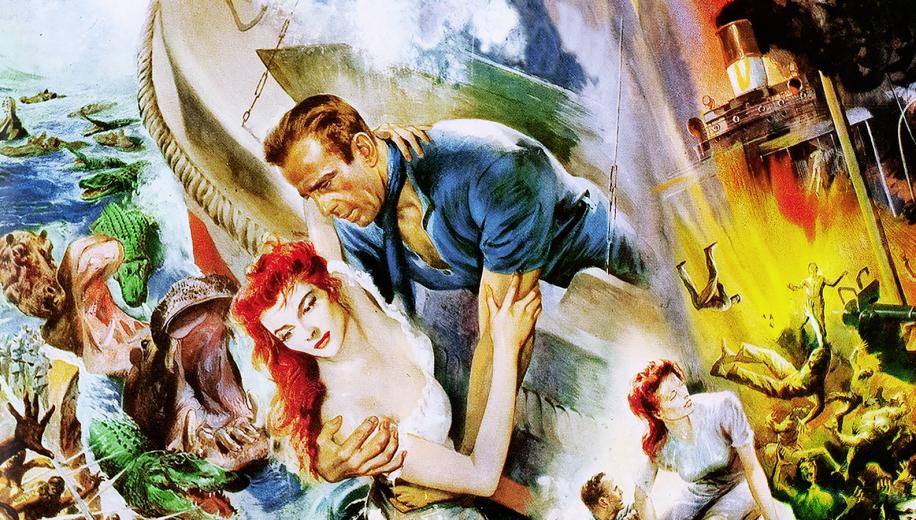 John Huston's all-time classic 1951 adaptation of the C.S. Forrester novel won Humphrey Bogart his only Oscar, perfectly pairing him with Katherine Hepburn for a treacherous trip across wartime waters.

Based on the 1935 novel of the same name, The African Queen charted the unlikely pairing of a proud and proper missionary and a down and dirty boat driver as World War I erupts and changes the landscape in Africa. It's a now-familiar love-hate riff that was superbly brought to life by a wildly cantankerous Bogart and a suitably prim Hepburn, earning them both Oscar attention at a time when they both needed it - Hepburn still struggling to find roles commensurate to her very distinctive tastes and style, and Bogart stopped only by sheer time, which would tragically run out for him just six short years after the movie's release.


It's a great little tale of adventure and unlikely romance, and an all-time classic

Huston's sumptuous film is almost begging for a widescreen scope, as it frames some gorgeous landscapes and charts a tough and eventful ride downriver and repositions a familiar unlikely pairing theme against a backdrop of war, giving these two lonely souls strange purpose in the chaos. The mere idea of escaping the overthrown lands would have been tough enough to realise, but the plan to turn their boat into a giant torpedo to ram a German steamer - and thereby make their own tiny little stand against the enemy - is equal parts insane and utter genius, in turn gifting the tried-and-tested narrative a nice little edge. Hepburn is on surprisingly warm form, and Bogart absolutely chews up the scenery and gets right under the dirty skin of his alcoholic captain, rightly getting this late-stage recognition for commitment to the art. It's a great little tale of adventure and unlikely romance, and an all-time classic.


The African Queen hits UK Blu-ray with a lavish box set courtesy of Eureka, who work their magic on what is likely a new encode, albeit reportedly founded upon Paramount's extensive 4K remaster of the film from some 10 years ago now. The end result is a stunning video presentation for a film of this vintage, delivering gorgeous 1080p/AVC-encoded video, framed in the movie's original Academy aspect ratio of 1.37:1.

The African Queen may be almost 70 years old but it looks absolutely superb, with the benefits of the 4K remaster evident on almost every single frame (apart from some dodgy back-shot footage on the river, and that awful 'swarm' scene), in particular bringing unparalleled depth of texture and detail to the close ups which arguably look the best for Bogart, pulling every iota of nuance from his unshaven, sweaty, worn, and often dirty visage. The unusual setting also gets prime focus here, colours are lush and vibrant, from the green foliage to the fiery yellow-orange flames when the village is being burned. With strong black levels, no damage, and no real defects, it's a prime demo reel for this vintage of production.

It's not demo but it more than gets the job done
The accompanying Uncompressed Linear PCM 1.0 Mono audio track is faithful enough despite not having a great deal to play with, likely based on the remastered track that Paramount worked on around the same time as the remastered 4K video, but also upgraded here to lossless from previous lossy offerings on international releases. It's still not a standout track, but it is more than just functional, providing plenty of room for the key elements of dialogue, score and effects to be disseminated, giving priority to the far from intrusive score only when necessary, picking up on the gravelly tones of Bogart, and Hepburn's defiant parries, as well as nominal effects in the form of fires, rushing water on the rivers, various dangerous wildlife sloshing around on the way, and even a few gunshots and explosions for good measure. It's not demo but it more than gets the job done.

A decent selection of extra features
Eureka's lavish box set affords The African Queen a decent selection of extra features, both old and new, with an Audio Commentary from the cinematographer, a couple of new Interviews, and the old - but impressive - hour-long Documentary making-of, as well as the original Trailer, all wrapped up in a hardbound slipcase with a 60-page book to boot.

Arguably the definitive release
The African Queen is a bona fide classic from John Huston, the last he would make before escaping to Europe following the troubles during the communist witch-hunt period in American history, remaining a high point in the careers of all those involved. Eureka's lavish Blu-ray box set provides arguably the definitive release, not only making the most of Paramount's 4K remaster but affording lossless audio and new extras to supplant the old. It comes highly recommended.