‘You know what has never saved the world? Your sarcasm…’ 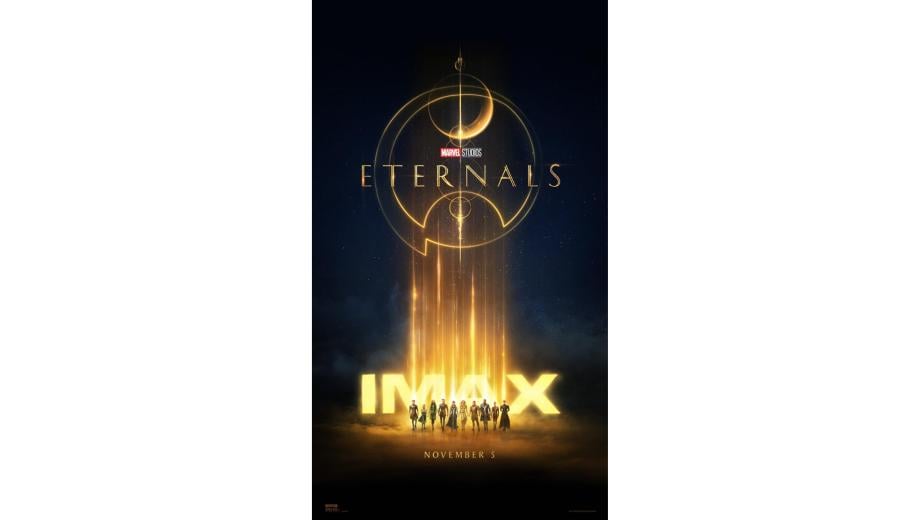 Best Director Oscar winner Chloe Zhao's much anticipated entry into the MCU is everything you imagined it would be. The good... and the not so good...

No-one will deny Kevin Feige and Marvel have got the right idea.

Find the best and most interesting talent and let them play in your multi-billion-dollar sandpit and see what happens... you can’t argue with the intent. And earlier this year, on the 25th April, when Zhao accepted her Oscar for Nomadland, the folks over at Marvel must have eased back in their very expensive chairs and smiled a wry smile to themselves that this was now a job well done…

But there has to be a match and connection to the material for this kind of partnership to work and at first glance, the galaxy-spanning story of omnipotent alien beings intertwining their own familial dynamics with that of human evolution doesn’t seem like a smooth fit. Especially when you consider the scope of the narrative – thousands of years ago, the celestial Arishem (some relation to GotG Vol 2’s Ego perhaps?) sent ten superpowered alien beings to earth to stop another alien race called the Deviants from wiping out humanity. This battle raged for centuries, until in 1500AD the last of the Deviants were vanquished, leaving our team of Eternals with gaps in their diaries and no sense of what to do next.

They went their separate ways, forming lives of their own, hidden among the population (mostly hidden anyway – Kumail Nanjiani (The Big Sick, Silicon Valley) is the world’s biggest Bollywood actor and has been for over one hundred years….), until now… when a Deviant suddenly attacks Eternals Sersi (Gemma Chan – Humans, Crazy Rich Asians) and Sprite (Lia McHugh – The Lodge, Songbird) in London. They are saved by fellow Eternal Ikaris (Richard Madden – Rocketman, Game of Thrones) and set off to track down their remaining colleagues and friends to find out why the Deviants have returned now.

It's a lot of plot

It’s a lot of plot. And unlike other MCU entries that touch on the cosmic, such as Doctor Strange or even the Guardians films, there’s no handy human-shaped audience substitute around to ask an awful lot of stupid questions that usually begin with ‘why…?’ or ‘what...?’ or ‘who…?’ However, Zhao and her fellow writers have done a solid job in getting all of this onscreen in such a way that the Eternals noobs don’t feel too lost amongst all the Kros, the Tiamuts and the Uni-Minds. No doubt fans of the source material will get a lot out of this, and it feels like the one MCU film so far that plays more for the initiated rather than the great unwashed, but it's not too dense for the rest of us mere mortals to keep up with.

And it's here that Zhao’s alignment to the material starts to become clear. The relationships between the Eternals, the intergalactic familial dynamic shot through with a hefty dose of immortality-derived neuroses, are where the clear focus of the film is. Sure, there are plenty of the requisite big action scenes of Eternal on Deviant fisticuffs, together with an epic finale, but Zhao is more interested in these characters. And it shows.

There are some lovely relationship moments drawn between the group, from their conflict, their love and their friendships – Angelina Jolie (Tomb Raider, Girl Interrupted) and Don Lee (Train to Busan, The Good The Bad The Weird) have a wonderful dynamic based around her violent memory lapses and subsequent PTSD and his ability to soothe and control her (similar to Hulk and Black Widow elsewhere in the MCU), while Brian Tyree Henry (Widows, Godzilla vs Kong) and Barry Keoghan (Dunkirk, Killing of a Scared Dear) have interesting and opposing views on the Eternal’s self-imposed rule of not helping out humankind outside of their war with the Deviants.

Sadly, Madden and Chan have drawn the short straw, saddled with the tough job of being both the stoic leads of the group and having an awkward romance to carry alongside it, not helped by the MCU’s first ever love scene, which had this reviewer's eleven-year-old daughter covering her eyes and asking me to tell her when it was over. Carrying one of those might have left some room for the pair to show their natural charisma as they ably demonstrate elsewhere, but lifting both means there’s no room for any real personality and they are easily the least interesting characters in the entire film.

There is some room for that fabled MCU humour, with both Nanjiani and Henry dropping some lovely little zingers, ably supported by Nanjiani’s faithful, camera-laden manservant. But the rest of the film is very serious and very po-faced and could have done with more of this from the rest of the large ensemble to help alleviate some of the almost at times unrelenting pomposity of it all.

Zhao also uses that wonderful eye of hers to great effect in establishing the scope of the film. While the action is indeed on a global and often cosmic scale, much of the actual film takes place in isolated, often rural areas, with just the main cast onscreen, meaning there’s a lovely intimacy to the events that is missing when every other shot is a crowd-strewn urban vista. It gives the Eternals a really different feel and vibe, even though it's yet another global destruction event, the exact kind seen so many times before. And it looks beautiful too, Zhao and her director of photography Ben Davis (Guardians, Doctor Strange, Three Billboards, etc) give us plenty of widescreen, windswept landscapes that almost feel cut from one of Malick’s latest slices of neorealistic Americana.

And yet for all of the above that works, there’s a nagging feeling that it’s missing… something.

The Deviants are characterless hordes with no real personality at all, meaning they barely register as anything other than fight fodder. There’s little variation between the multiple action scenes, all the more glaring after the wonderful Shang Chi gave us such inventive, varied and fun choreography. Black Widow’s Florence Pugh would have a field day with all the ‘superhero posing’ going on, Zhao forcing far too many of the splash page type group shots that feel unnatural and awkward, a possible sign of her lack of comfort and experience with the actual notion of ‘superheroes’ in a superhero movie. Other big name and more interesting cast members, such as Salma Hayek, Lauren Ridoff and Kit Harrington, have little more than glorified cameos and appear wasted, especially given its mammoth 2-hour 37-minute run time.

... Now might be the time to finally hand the keys fully over to these wonderfully creative and interesting directors, rather than keeping one foot firmly on the brake

And lastly there’s a nagging sense that there’s a much more interesting film hidden in here somewhere – with these characters spending 7,000 years on earth, we get no real sense of what this has meant to them. And with this cast, you get the feeling that if Zhao had been allowed, she would have made a much more interesting film if she’d jettisoned the Deviant plot line entirely and just focussed on this group of characters, their inter-relationships and their time on earth (how have they impacted culture, divergent thoughts on the human race, etc) and the almost natural conflicts that would have arisen from these. But that was never going to happen, let’s be honest…

… and therein lies an interesting predicament for Feige and the rest of the MCU creative team. It's becoming more and more obvious the further we get into the MCU that these interesting directors are still having to fit into an MCU mould and certainly on the evidence of this and Black Widow, it's beginning to get a little bit restrictive, resulting in offerings that are getting somewhat stale. Now might be the time to finally hand the keys fully over to these wonderfully creative and interesting directors, rather than keeping one foot firmly on the brake.

It's an interesting film for Phase 4 of the Marvel Cinematic Universe that promises much, yet not fully delivering, feeling like that MCU conveyor belt is getting more and more prescriptive at a time when it needs to be getting much less so.

A note on the IMAX presentation: this was watched at the IMAX at The Printworks in Manchester. The Eternals was filmed with IMAX-certified Arri Alexa LF and Mini LF cameras. The film alternated between a 1.43:1, 1.90:1 and 2.39:1 aspect ratios. Captured with high-resolution IMAX-certified cameras; Eternals had 1hr, 7 minutes expanded to the 1:90 aspect ratio presentation, and 6 minutes, 20 seconds expanded to 1:43 aspect ratio presentation. These expanded aspect ratio sequences were specifically chosen and created by Director Chloé Zhao in our IMAX mastering theatre to ensure her personal vision for the IMAX version was created. These expanded scenes do help draw you into the film thanks to that crystal clear image and larger screen footprint. The shifting aspect ratios weren't too distracting and the expanded ratio is used for the most part really well (initial shots of Babylon look stunning), drawing you into the film (even though the limited 1.43:1 usage meant the experience wasn't quite as immersive as that Bond opus). The remainder of the film looked perfectly framed, with the high quality of the presentation maintained throughout. The IMAX 6-Track soundtrack was nicely thunderous, although with the sound design slightly more restrained for the most part as the film itself was, it’s not quite the balls to the wall aural experience of other IMAX blockbusters. Even if not quite the ultimate experience IMAX has to offer, it was an excellent presentation.