After making a movie this meh, it must have been a challenge crafting a stinger that would actually make you anticipate a sequel even less. 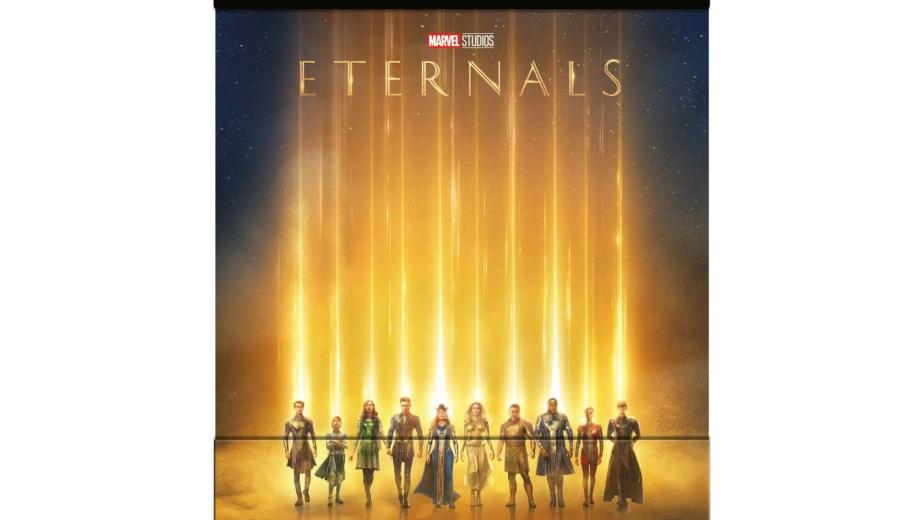 A decade back, an announcement over doing "Eternals" as a chapter in the MCU might have been met with a fair degree of skepticism with the wide open world of the Marvel universe hardly tapped into but for in perhaps Thor, and no certainty as to whether or not they could pull off a tale about a disparate group of superhero characters that very few will have heard of. But that all changed with 2014's Guardians of the Galaxy, and by the time Endgame rolled around, Marvel could do no wrong - its fanbase trusting of almost anything and everything it they could come up with.

There were a number of issues that ensued, however, not least a global pandemic, but also involving a botched TV attempt at bringing the Inhumans to life - Marvel's first choice for a Big Screen outing of a little-known superhero group - as well as issues over casting which ultimately saw Angelina Jolie's leading role relegated to support, and a pair of disappointing bland TV actors take centre stage. Lastly was Marvel's desperate desire to secure the talents of Nomadland's Chloé Zhao as the director, which certainly ensured one of the MCU's most distinctly flavoured and contemplative entries, even if it was still dull as hell.

... may well be the first MCU movie that fans won't ever want to revisit

Eternals gets just about everything wrong it could get wrong. The script is awful, and the story deeply contrived and at times nonsensical, going out of its way to address the presence of these Justice League-esque superpowered Gods on the planet during the events of not only Endgame but the entire Infinity Saga (and indeed, the past 7000 years of calamity) as "we didn't want to interfere". Which soon becomes the mantra for the Eternals in general, as this painfully melodramatic group of whiners moan and cry their way through a succession of anticlimactic reveals about the true purpose behind their extremely Galactus-like benefactor, and the presence of disappointingly pointless creatures on the planet known as Deviants (stupid name). The style is jarring - Zhao citing Malick as inspiration for a series of navel-gazing scenes as the sun sets and characters stare longingly at one another, with the beautiful natural landscapes admittedly stunning but sometimes at odds with the action and even the damn costumes (Eternals may have fared better set on another planet, Thor-style) and with no ability to wrangle either her cast or the script/story to make for a worthy journey, defects which would normally rest entirely at the foot of a director but probably should spill out into the MCU factory too, which does tend to override whatever even a visionary director wants to bring to a piece.

And, wow, the acting is terrible. Veterans like Salma Hayek and Angelina Jolie fare well enough, with the latter somewhat distracting with her superstar looks, but still a far better original choice for the lead, doing heavyweight work with her side-journey which is actually far more compelling than much of the main arc and could have been a movie all unto itself. No, the casting of Humans' Gemma Chan and Game of Thrones' Richard Madden (and indeed Kit Harrington) is the real fatal blow to this movie, both charisma voids - Chan was great as a robot in Humans - who simply don't have the experience to be able to bring anything into their roles other than vacant looks and the reading of lines. Yet their relationship is the absolute backbone of this entire story, which ruins any sense of immersion or even interest, because you don't buy into it at all. They share zero chemistry, let alone a love that spans millennia, and impossible decisions later into the tale just don't have any impact. The death knell is a comic stinger by a celebrity almost as out of place as Ed Sheeran in Red Notice. It's pretty, sure, it's got a couple of tense skirmishes and some scale to the final conflict, maybe one funny line and one and a half likeable characters. But it's dull as hell, tediously languid, indulgent and desperately redundant, and may well be the first MCU movie that fans won't ever want to revisit, and would prefer to forget, with threats of a sequel the last thing anybody is wanting to hear.

Eternals comes to UK 4K Ultra HD Blu-ray courtesy of Disney and, as is now their unfortunate form, having been made available for free as part of their Disney+ subscription, in 4K Dolby Vision (following what they did with The Last Duel recently) and 4K Dolby Vision with IMAX Enhancement (following what they did with Shang Chi last year), some time before the disc is out. This Ultra HD Blu-ray delivers a refined 4K presentation with HDR10.

Eternals is as impressively put together as you would expect a Marvel blockbuster to be, in terms of seamlessly blending CG spectacle with real-world characters and environments, but it's also not a traditionally stylised entry, adopting a much more natural landscape that is also much more... bland. Zhao's influence has clearly informed the choice of natural environments, beachfronts, jungles and so forth, with even the signature costumes the lead characters wear often feeling almost like an organic extension of Ancient Greek and Egyptian robes, obviously imbued by futuristic notes. This is a commendable angle, grounding the visuals, but - conversely - it does leave them frequently far from wowing. Beautiful maybe, but occasionally jarring within this particular universe. Of course, the various powers sear across the screen, brought to wondrously vibrant life, as beams tear through the air, or - again, Ancient Greek-infused - energy sword-and-shields spark to life. There is some wow-factor to this, even if it is unconventional. Detail is excellent, whilst black levels are rich and deep - really deep. It's a very good presentation.

But so's the presentation on Disney+. It's 4K, presumably culled from the same reportedly native 4K Digital Intermediate. Sure, it doesn't push the same bitrate as the disc at all, but in playback it's still impressive, drawing from the added enhancements of Dolby Vision and the "IMAX Enhanced" version to try and compensate for, and perhaps even flip the balance somewhat for those who want that extra headroom on their display/projector. The reality is that, of all of the MCU "IMAX Enhanced" offerings, The Eternals is one of the less impressive, presumably partly due to the flat palette and 'natural' but bland landscapes, but also due to the nature and scope of some of the conflicts. But still, these are "enhancements" that you might have hoped would at least come as options on a physical disc release that costs you a pretty penny (as opposed to coming free with your subscription). The physical release still ultimately has the edge for sure, but Disney seem absolutely intent on closing that gap, and for many it's hardly a £25 premium edge at all.

Eternals' 4K Ultra HD Blu-ray delivers 3D High Definition object-based immersive audio in the form of Dolby Atmos. It's a solid track, and it is a step up from the Atmos accompaniment available on Disney+, but the gap is again not sizeable enough to prove definitive for all, particularly with the moderately lacking LFE element which persists - to varying degrees - on most of their releases.

Dialogue gets fine prioritisation and presentation, disseminated across the array clearly and coherently throughout, largely from the frontal channels. Effects - as sporadically used as they often feel - do offer a degree of separation and perhaps even impact, giving power to the energy blasts and 'generated' weaponry and equipment, making for a few reasonably engulfing setpieces that engage the surrounds admirably and even wield a little LFE might. It doesn't qualify for demo, but it's frequently very good nonetheless, and it is a modest step up over the Disney+ track, which is pretty par for the course by now. That said, again, many will be wondering whether any of this justifies such a premium price tag.

Disney's 4K release of Eternals boasts a few extra features, relegated to the Blu-ray but at least not made available on Disney+, which would have only added salt to the wound (c.f. The Last Duel).

There are a couple of Featurettes that briefly dip into some of the background to the production, as well as an Audio Commentary from the Director herself. There are also a few Deleted Scenes and a Gag Reel.

Eternals is rock bottom for the MCU. Even Iron Man 2 had its moments, and Thor: Dark World earned some redemption courtesy of both Infinity War / Endgame and Loki (as well as likely the upcoming Thor: Love and Thunder no doubt). At the moment, it remains an utterly redundant entry in the series, and many will hope it stays that way, despite all manner of stingers and closing twists to hint that there's more to tell. Really, nobody wants that, at all.

... for what it's worth, it does not get better on subsequent viewings

Disney's 4K release of Eternals is just a succession of frustrations wrapped up in a £25 package. Firstly, it comes after the film was made available for free as part of a Disney+ subscription (it would have made sense, had this been a premium Disney+ purchase, then released on disc, then free on Disney Plus) which makes it, by default, redundant for many who will (hopefully) watch it and realise they have no interest in owning this particular chapter. Secondly, the streaming options are tempting - it's 4K Dolby Vision on streaming, but inexplicably only HDR10 on disc, and there's the option to watch it "IMAX Enhanced" (which, however much or little that's worth, really is insulting not to have as an option on a pricey disc release). Thirdly, the Atmos isn't spectacular, still moderated a bit on the LFE front, and really it's the soundtracks that still unequivocally distinguish streaming from physical, so without a spectacular Atmos track, what is the point in this? Yes, the answer lies in merely wanting to complete the never-ending MCU collection, although with all the points above, Disney really is trying to prove the point that you should let go now. Certainly, if there was ever a MCU movie you'll never wish to watch again (and, hopefully, unless they really do a sequel, will never have to) it's this one. And, for what it's worth, it does not get better on subsequent viewings.

ETERNALS comes to 4K Ultra HD™ with HDR and Dolby Atmos 7th February, but is already available in 4K UHD with Dolby Vision and Dolby Atmos, and IMAX Enhancement, on Disney Plus.